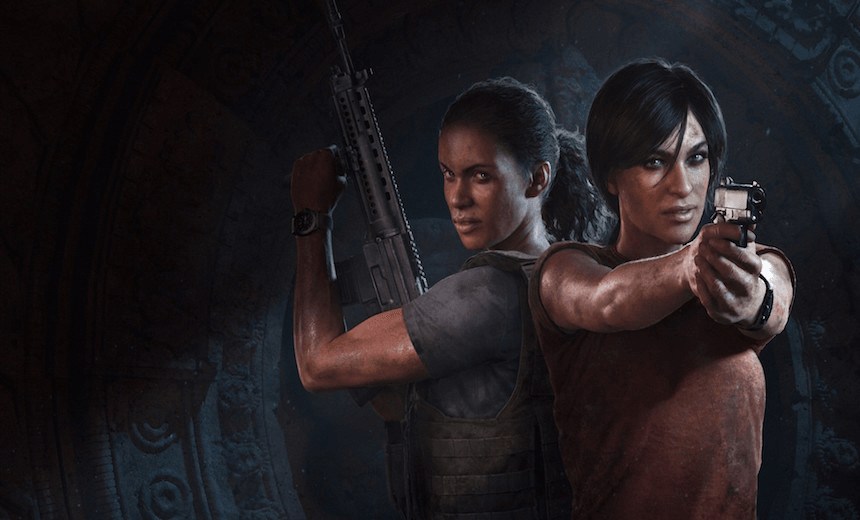 Sam Brooks dives into the new Uncharted game, The Lost Legacy, with two progressively awesome protagonists and the classic cinematic gameplay pioneered by the series.

I spent some time being an Uncharted sceptic, mostly out of a fierce loyalty to Tomb Raider, the proud predecessor of the series. I wanted more puzzles! More women punching things! I wanted more ludicrous things happening! I want more, more, more. But as the second, third and fourth games came around, Uncharted has gotten bigger, more ludicrous and much better. Naughty Dog has taken everything that next-gen gaming has had to offer and wrung it completely dry, and the results are pretty damn excellent.

So I moved onto Uncharted: The Lost Legacy with a lot of excitement. Two of the best-written and most interesting characters in the series were being put in the spotlight; the morally-dubious and dryly witty Chloe Frazier and the blunt-as-a-sledgehammer Nadine Ross. It promised more of the gameplay of Uncharted 4, the graphics that justify me buying a television screen I could hardly fit in my flat and the same full-bodied, immersive experience that Naughty Dog seems to do better than anybody else at the moment.

The premise is simple and needs little set-up. After the events of Uncharted 4, Chloe Frazier teams up with Nadine Ross in order to find a lost relic of the Hoysala Kingdom, the Tusk of Ganesh. As expected, and intended, the pairing of treasure hunter Chloe and tough-as-shit Nadine doesn’t go smoothly at first. Chloe makes fun of Nadine’s straight-shooting nature, and Nadine has no time for Chloe’s sense of humour or sense of play.

The biggest joy of the game is the relationship that develops between the two. Because what Uncharted: The Lost Legacy is at its core a buddy comedy, and the writing that buoyed Nathan Drake through four instalments becomes gold here, potentially because these are two characters with well-defined, and I would say more interesting, backgrounds and a clear conflict. Even when the plot follows familiar beats, and it follows those beats compellingly and well, the writing between these characters sparks.

The incidental banter that was a highlight of Uncharted 4 remains so here. While the game never forgets that these two people are on a dangerous mission to collect the Tusk of Ganesh, it also never forgets that these are also two people who make jokes, observe their surroundings, accidentally step on each other’s toes and get much closer. Half of this is due to the great writing; it’s a bit showy and a bit Whedonesque, but the game really nails how people actually interact, a low but important bar to clear. When Nadine makes a joke that goes a bit too far for Chloe, it’s awkward and it feels real, and when she apologises later for it (an entire ruin later) it feels similarly so.

You can also chalk it up to the performances of Claudia Black and Laura Bailey. Black is perhaps most famous to gamers as everybody’s favourite disapprover Morrigan from the Dragon Age series, and she brings that same gift with a punchline and a withering put-down to Chloe. Beyond that, her voice is gorgeous to listen to, she makes this dialogue sound like Pinter.

On the other hand, Bailey is so prolific that it would be faster to list games that she isn’t in, but she’s probably most well-known for her impressive performance in the Infamous expansion First Light, and with Ross she nails the character’s sharpness and shortness of tongue almost immediately. Both performers nail strange and difficult accents, Chloe’s accent is a bizarre hybrid of Indian/Australian while Nadine is straight-up South African, and when the dialogue gets flowing between them you can feel the actors breathe life into their characters. It never feels like actors reading lines.

The game drives through on this chemistry and this interplay, but also this is a Naughty Dog game circa 2017. These games are like playing a movie, with everything that implies. The cinematography (I don’t know what else you call it at this point!) is gorgeous, one of the collectibles in this game are literally photos that Chloe takes with her phone, and when the game properly goes on-rails for an action sequence it’s for a goddamned good reason. It’s to the game’s credit that these action sequences are highlights but never feel like they dominate – it’s just as much fun to roam around the overrun Hoysala jungle collecting things as it is to go through one of the franchise’s now signature cinematic (and incredibly spoileriffic) chase sequences.

The gunplay is less my thing, but unlike the waves of combat which could become relentless and slightly hilarious in older games, the combat is limited to very specific and confined sections of the game, sections where it makes sense for you to slaughter hundreds of mercenaries or unnamed rebels! The game introduces tall grass to hide in to help with the stealth, and although this is never the funnest part of the game, it’s slick and engaging enough that it never feels like a chore.

Uncharted: The Lost Legacy feels like a perfect step forward for the series. The ten hour length is the exact right amount of time to spend with two side characters, although a full 20-30 hour sojourn with these specific characters wouldn’t be unwelcome, and it’s the right length of time for the kind of tight, cinematic plot that Naughty Dog seems to excel at doing. Naughty Dog could use this engine to make these games forever (and I’d be surprised if this is the last game they make with this engine).

Even more importantly, and subtly, Uncharted: The Lost Legacy is an important step forward for a series that has already, laudably, done well with its representation of women. As boring and clickbaity as the Bechdel Test has become, this game easily and quickly passes it, and both Chloe and Nadine never feel like the sidechick to Nathan Drake, who nary gets a mention; they feel like they could headline a mainbill Uncharted game. There’s a reason why people keep writing about the representation of women in games, and it’s because it’s still terrible and unevenly slanted, but Naughty Dog are slowly moving the dial in the other, and the correct, reaction.

But as a game? It’s what Naughty Dog delivers. It’s a triple-A game, with the depth and human element that many of its peers lack, and it’s that part that makes it special. There’s also a photo mode where you get to make Chloe wink during any moment of the game. If that’s not reason enough to buy it, I don’t know who killed your soul.