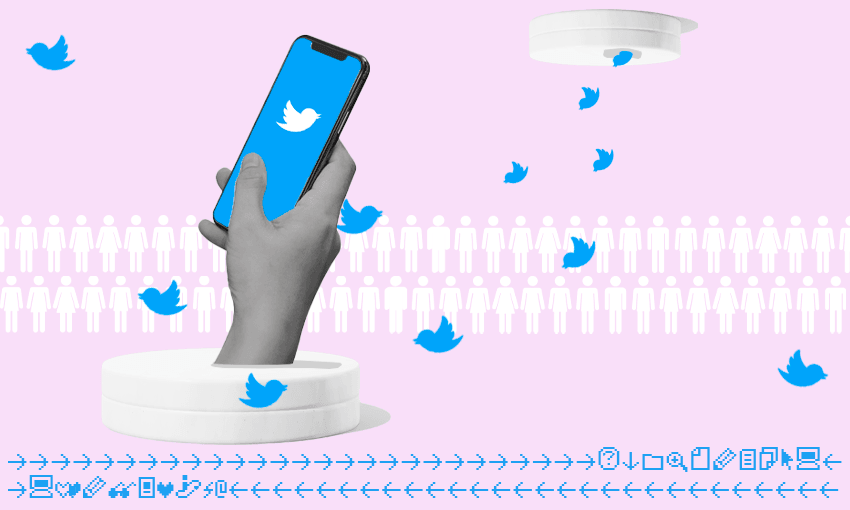 Artie is a transgender 17-year-old living in Auckland. He tells IRL why being anonymous on the internet helps alleviate his gender dysphoria and promote a sense of safety. As told to Madeleine Holden.

I guess I’m a bit unusual in my usage of social media, at least compared to other Zoomers I know. I don’t use TikTok – the primary platform where memes and elements of “Zoomer culture” are shared – and I only use Instagram for messaging friends, not for posting pictures. My platforms of choice are Discord and Twitter.

I would much rather use social platforms like these that centre on written text because I have problems with processing audio, but I also prefer being anonymous online, like I am on Twitter. When you’re anonymous, you get to choose people’s first impression of you and how they perceive you, whereas in real life, the other person’s perception of you is dictated by how they’ve seen you for as long as they’ve known you.

guy who's lying awake in bed listening to the wind, trying to come to terms w the fact he might not be nonbinary he might just be A Guy

For me, Instagram is a place where my identity is known, by which I mean the people who follow me, and the people I follow, are always people I know IRL or they’re friends of people I know IRL. I’m trans, and I’m not out to most people, so it’s quite uncomfortable being in a space where people will assume that you’re a cis girl and treat you like one, because you’ve never given them any reason to believe otherwise.

Instagram also causes discomfort for me because most people my age use it to post selfies. I don’t like seeing myself in images because it triggers gender dysphoria – that’s the discomfort that many trans people have with things that are commonly associated with the gender they were assigned at birth; how their body looks or the clothes they wear or how they’re treated by other people. Gender dysphoria can be different for everyone who experiences it: there’s no one singular Trans Experience.

It’s painful to look at images of yourself and feel the wrongness of it. Dysphoria for many trans people, including myself, manifests as thoughts of, ‘Fuck, I look like [gender assigned at birth]’, and that pain is specific and difficult to describe to someone who hasn’t experienced it. It’s like when you look in the mirror and feel revolted by what you see because it doesn’t line up with how you want to look. It doesn’t line up with the gender expression that would bring you joy.

Being online, and especially being anonymous online, also promotes a sense of safety for me. High schoolers are still homophobic and transphobic, and for students like me, you can’t really escape people you know are bigoted because you’re all in the same school, class or year group. If someone’s being disgusting to you somewhere like Twitter, you can block them and report them. Then at least they’re out of your space, and often the account saying those things will get taken down. In real life, though, there isn’t too much teachers can do to help you without much concrete evidence.

The sense of community I found online was incredible, and I know that’s also true for many other queer people my age. In school it’s pretty lonely: I’m the only openly queer prefect, for example, but online you can express yourself more, you can try out different names and pronouns, because the fear of vitriol and hate are nowhere near as bad as IRL.

Trans kids just want to do Normal Kid Things like hang out with our mates and play video games and do well in school and shit, without feeling like our very existences are up for debate, or feeling that there is no space for us to safely exist

Again, anonymity definitely helps, because you can do things like come out as trans and know there will be little-to-no repercussions from the people around you IRL, like family or peers – and those repercussions can be pretty serious, like being kicked out of home or experiencing physical violence.

I first came out as transmasculine on Twitter, but since then, I’ve been slowly telling more and more people in my life. There’s something to be said about how I found it easier to announce my transness to 2,000 people on Twitter than to gather up my courage to tell anyone in real life, even though I trust them a lot.

There’s a couple things that make coming out in a space like Twitter easier than IRL. Firstly, there’s the knowledge that many people on here are trans and so would understand and react well. Secondly, there’s the medium itself: if people react badly to you online, it’s easy to just block or mute them and move on with your day. The separation between users makes it harder in some ways to socialise like we do offline, but it’s also key for marginalised minorities to ensure our own safety.

In terms of community, as someone who is in secondary school, the appeal of platforms like Twitter is that you can choose who to be around: I can easily find and interact with other queer people and block bigots and trolls, whereas in school I can’t exactly get away from the boy who threatened bodily harm to one of my mates just because he’s queer. There’s no screenshot and report button in real life when someone calls you a slur in the hallways at school.

The first person I came out to in person was my dean at school; he’s been incredibly supportive and I appreciate him a lot. The thing with environments like school, though, is that it’s incredibly lonely, there are no trans members of staff that I know of, so there wasn’t anyone I could really turn to specifically in regards to being trans. Online, though, there are loads of people who’ve been in my position and who get it. It’s nice to be understood, and that’s definitely why I’ve stayed here so long.