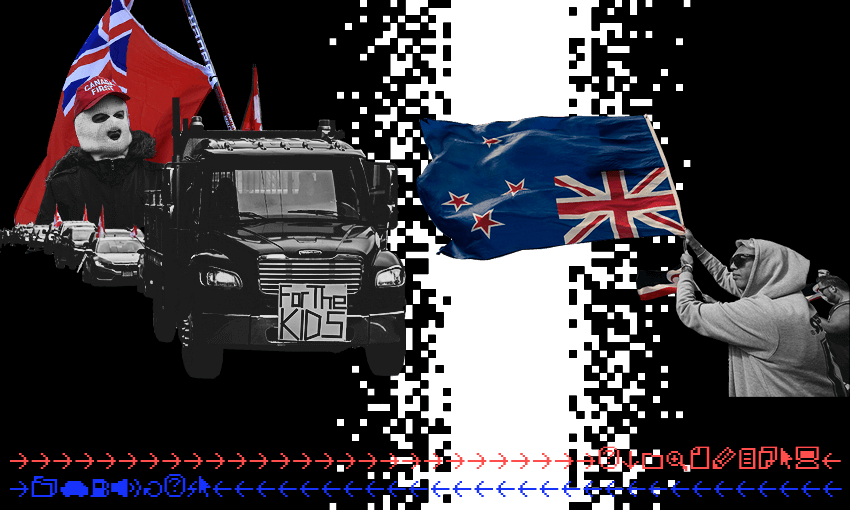 NZ has a trucker convoy, because protests are global now

The Freedom Convoy is the latest in a string of international protest movements to land in Aotearoa. For IRL, Dylan Reeve explores how the internet facilitates this trend.

As January 2022 was wrapping up, Canadian truckers and their supporters were pulling their “Freedom Convoy” into the streets of Canada’s capital city, Ottawa. Around the same time, here in Aotearoa, a Facebook group and several Telegram channels were established with the hope of replicating the convoy on our shores. Yesterday, that hope was realised with “Convoy 2022 NZ” arriving in Wellington after traversing the country in a little over two days.

Convoy 2022 NZ is the latest example of the globalisation of protest, and the movements and ideas that underpin those protests. From the first moment the Canadian truckers embarked on their convoy, updates were being shared worldwide among online groups sympathetic to their goals. The protest was swiftly emulated in Australia, and New Zealanders immediately called for a local iteration.

Organisers had a template for what to do, as well as instant name recognition among potential supporters. They didn’t need to explain what their protest was, or how it would work; they simply said “convoy” and everyone immediately knew what was happening.

Within an hour of the Telegram group’s creation, links had been shared across the majority of New Zealand’s anti-vax, anti-mandate and conspiracy Telegram groups. Well-known personalities in these communities were re-posting invites and joining the group themselves. The group reached close to 10,000 members by the weekend.

The situation was similar on Facebook, with invites shared widely among groups opposing Covid restrictions, more general pages focused on other topics, and on personal timelines. In little over a week, the membership of the Convoy 2022 NZ Facebook group had exploded to over 60,000 members.

New Zealand isn’t unique in this regard, either. By this past weekend, there were Covid protest convoys planned, or underway, in more than two dozen countries. Posts promoting and celebrating the many international events are spread widely on Telegram and Facebook; the “Freedom Convoy” shorthand immediately clarifying what the protest is and stands for.

This phenomenon isn’t unique to Covid protest movements. We’ve seen the same happen recently with international protest movements like Black Lives Matter and, further back, Occupy Wall Street. The highly globalised nature of social media has made it both easy and natural for well-publicised protests to be spontaneously franchised around the world.

Once a protest brand is established, values outlined, methodologies workshopped and slogans adopted, it makes sense for other like-minded groups to create their own franchise, tailoring them to local conditions where necessary. They can take advantage of the momentum and name recognition of the broader movement to jump-start the local version.

What that meant for New Zealand’s convoy was an easy template to follow. Participants knew what they were protesting (vaccine mandates and Covid restrictions); how they were doing it (by driving a string of vehicles to the nation’s capital); and how to frame it (as a protest of disaffected truck drivers). All that was required were basic steps to localise the demonstration, so truck-based imagery was created to tie into similar branding internationally.

The Canadian convoy emerged to protest a very specific issue: a legal mandate that truck drivers crossing the US/Canada border be fully vaccinated. It was, initially, a protest comprised mostly of truck drivers about an issue directly related to trucking. But as the movement gathered momentum and attention, the focus shifted, and it soon became a broader protest about all aspects of Canada’s Covid response.

The broadening purpose and message of the Canadian protest quickly accelerated their support, especially in the US where they became a cause célèbre among both mainstream and more extreme right-wing media. This attention saw an official GoFundMe raise a staggering $12m before the site cancelled the appeal, forcing them to turn to another fundraising site where they have raised millions more.

In New Zealand, the first steps of protest organisation could be skipped, thanks to the power of the internet and social media. There was no trucker-specific issue to protest, and the organisers didn’t claim any direct connection to trucking in New Zealand. But by that stage the branding, thanks to the well-publicised and widely-embraced Canadian model they adopted, had been established – it was, according to much of the discussion around the event, a “truckers convoy” regardless of the number of trucks involved. The idea of truckies fighting for freedom had fundamentally become a global internet meme within the communities opposing Covid restrictions.

Even before the first vehicles set off from Bluff and Cape Reinga on Sunday morning, participants had taken inspiration and advice from the international models that inspired them. Protesters had decorated their cars with washable markers and draped upside down flags (a sign of a country in distress, they argued). Rallying points were organised where supporters could cheer on the convoy as it passed. And, most importantly, having watched the Canadian and Australian protests, they understood how critical real-time communication would be on the road – CB radios were an option for a few, but the overseas originators showed the way for the rest: a push-to-talk mobile app called Zello.

More than a week after the first trucks (and cars) rolled into downtown Ottawa, the Canadian protesters are still effectively blockading the city centre, insisting they won’t stand down until their demands are met. The city’s leaders and police are starting to ramp up their response by preventing the flow of food and fuel to the now-parked convoy, but the protesters have stood firm, vowing not to back down. This tenacity is seen by many in Aotearoa as a model to emulate, with some imagining weeks of standstill in Wellington.

It remains to be seen how the local convoy protest pans out, but another benefit of their adoption of the hot new international protest brand is that they have the attention of like-minded individuals from around the world; attention that could potentially be translated into financial support if they’re able to stand out from the crowd of international convoys.

For protest organisers who may have previously struggled to attract attention, support and participants for their events, the idea of jumping onto an existing protest movement is like some type of real-world cheat code, allowing them to bypass all the hard and unrewarding prep work. But it does, unfortunately, rely on waiting for someone, somewhere, to get that really successful protest brand up and running first.