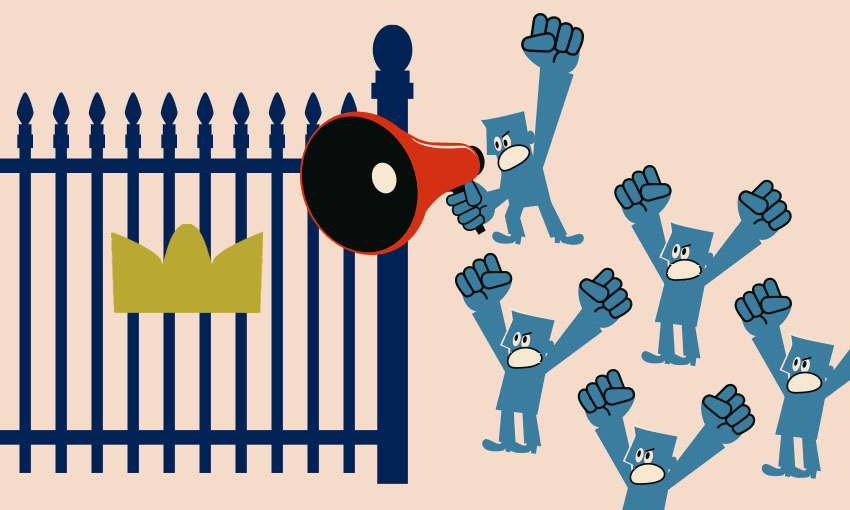 Shouting at the gates

A small but persistent collection of protesters gathers each day to yell at possibly empty houses, imploring the governor general to kick the government out of power. For IRL, Dylan Reeve checks out what they’re up to.

John seems like an everyday New Zealander – salt-of-the-earth type you’d expect to run into at the supermarket, or in the pub, or maybe at the rugby club. But on this day John, wearing a faded old t-shirt and a brown cap over his grey hair, is in a leafy Auckland suburb and stepping up to a large, ornate gate at the end of a wide driveway.

“My name is John,” he begins speaking loudly at the gate, or perhaps the mostly empty driveway beyond. “Governor general, I am demanding that you dissolve parliament and call writs for a new election to get rid of this government; it is corrupt, it is illegal and it is doing harm to the citizens of this country.”

The gate remains unmoved. “We will be here every day, until you do your duty,” he loudly concludes before turning and silently walking away from the emotionless steel structure.

A moment later his place in front of the gate is taken up by a new person – a woman in a light sundress and wide-brimmed floppy straw hat who seems like she’d be at home at the nearby tennis club. “Governor general, my name is Donna,” she shouts, clearly addressing the seemingly empty house that sits at the end of the 50-metre driveway. “I am standing at your gate, asking you to do your job. I am standing on behalf of all of the people who can’t be here,” she continues loudly.

The belief that brings them to the driveway of Government House in Epsom is that the governor general, Dame Cindy Kiro, can dissolve parliament and order up a new election. It isn’t entirely fanciful – doing so is certainly among the powers held by the Queen’s representative in New Zealand. Such is the nature of our status as a Commonwealth realm of the Crown.

However, those powers have only ever been used as a ceremonial part of our election process, where the prime minister advises the governor general to dissolve parliament ahead of a general election. Otago University law professor Andrew Geddis offered a simpler assessment of the process proposed by those at the gates. “From a constitutional law perspective, the technical term for what they’re calling for is ‘nuts’,” Geddis exasperatedly told me by phone.

Videos of these solemn individuals, calling for the termination of the sixth Labour government, are shared online by Karen Brewer, an outspoken Australian conspiracy theorist who is the loudest proponent of this specific course of action. Brewer, now living in Northland, is no stranger to controversy – she lost a large defamation case in Australia, coached an MIQ-defying nurse here, and has been arrested locally during a previous effort to have the government overturned.

Brewer, who has been banned from Facebook on many occasions, now does most of her influencing on Telegram to nearly 23,000 followers. She posts frequent videos and voice messages to promote her theories, along with flyers encouraging “Anzacs” to stand up across New Zealand and Australia to have their governments thrown out.

The theories Brewer promotes are a complicated mix of Freemason conspiracies, QAnon-like global paedophile cabal ideas, simplistic interpretations of Commonwealth constitutional law and some sovereign citizen content. The latter tends to argue, confusingly, that the government is really a corporation, and people are lied to about their legal status as individuals within the system. “The whole sovereign citizen thing is basically treating law like a form of magic,” Geddis patiently explains. “The idea is if you can just find the right magic legal words you can unlock an entire new world – but it’s meaningless, it’s just jargon.”

At various stages Brewer has loudly expressed her frustration with many anti-Covid protests, including the recent parliament occupation, for what she sees as wasted effort. Her videos often have a condescending tone seemingly directly at those who won’t just do as she says – if all those people, she frequently insists, were simply to directly demand the governor general dissolve parliament, success would be in their grasp.

In the days immediately following the breakup of the Wellington protest, Brewer started to see success as displaced protesters, unsure about their next move, picked up on her ideas and made their way to Government House in Wellington to voice their demands. But it was, perhaps unsurprisingly, still unsuccessful, and a couple of over-excited people, from among the new larger group, were arrested after jumping the fence.

Fundamentally the demand they’re making is that they, a minority, should be able to upend our democracy. “It would be somewhat unusual if our entire system of government could be overturned by 12—” Geddis started, before interrupting himself. “Not only somewhat unusual, it would also, of course, be terrible!”

As the energy of the occupation fades, those taking their daily stand to dissolve government have dwindled again. In the middle of last week I visited Government House in Auckland, one of the official residences of the governor general, and found a very quiet scene with just three protesters (I will soon learn they dispute that characterisation) gathered near one of the property’s three gates.

A security guard at another gate told me that, most days, there were “seven, eight people out there, sometimes 10 or 15”. He didn’t really know what they were shouting about, and usually moved his seat further away from the gate when they arrived.

Nearby, a neighbour, overlooking the lush property, told me she respected people’s right to protest, but didn’t really see the point. “The core group of eight or 10 of them come between 11 and one usually, and they play ‘The Last Post’, and chant and then they talk to the house, and I just don’t know what they’re going to achieve.”

As we stood at her front door looking towards the still empty driveway, she was respectful of their long-running protest. “This is what they feel they need to do, and they’re entitled to do that, as long as they’re not impinging on other people’s liberty and freedom.”

I headed back to talk to the small group gathered around the corner. I explained who I was and asked if they’d talk about their protest. “It’s not a protest,” I was immediately corrected by one woman who declined to offer a name. “It’s a stand.”

“Are you guys among the group who stand at the other gate and communicate with the house?” I asked, immediately walking into another landmine. “We’re not a group,” said the first woman, “we stand in our own sovereignty,” she and another member of the not-group said in chorus. They clarified that they had no name, nor any leaders. They were just individuals, expressing their individual thoughts.

We spoke for a while, the first woman being the main participant. What did they hope to accomplish? The dissolution of parliament and a new election. Did they think a new election would get a different result? Yes, because all the existing elected officials wouldn’t be allowed to participate.

“The people get to choose from Joe Bloggs – whoever wants to give it a go, but we’ll be checking them out first,” the nameless sovereign individual explained.

We spoke for a while longer, spending a little while on whether a handful of people overturning a government was reasonable in a democracy. “They’re not even really a government, they’re a corporation,” was the counter to that issue. (Professor Geddis later confirmed, just in case there were any doubt: the government isn’t a corporation.)

The conversation reached a slightly awkward conclusion when a new sovereign individual joined the not-group. She was apparently more familiar with The Spinoff — “oh no!” she scoffed when I told her who I was. The topic of conversation, among the gathered individuals who weren’t a group, was changed to Canada’s ending of mandates, and I found our discussion ended.

I drove away thinking about the futility of it all – it’s clear that standing at the gates of the governor general’s house isn’t going to make any change, but still they turn up daily.

“I’m doing this because I want my kids to have the life that I had; I don’t want them to live in a communist world,” I had been told at one point. Making this small gesture feels to some like taking a stand against one of the world’s many Big Bad Things, but perhaps not one of the real ones.