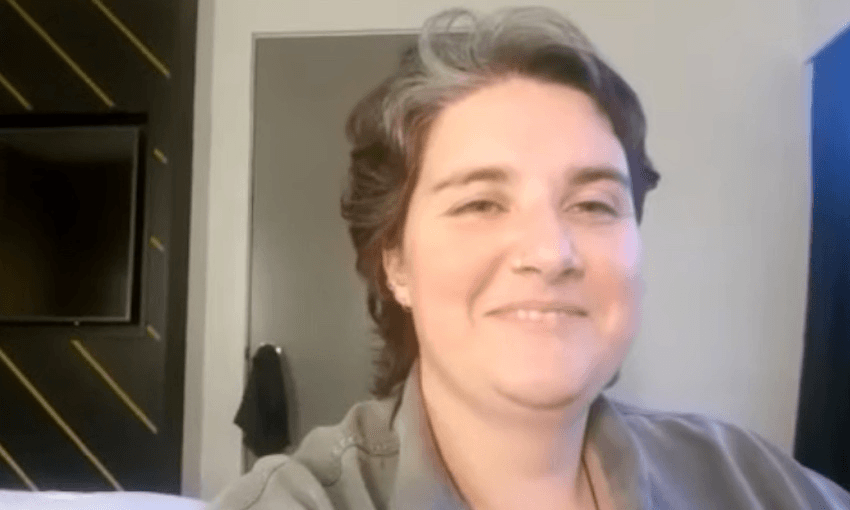 Having refused to take a Covid-19 test over the duration of her 28-day stay, Australian woman Lucinda Baulch was released on Tuesday from managed isolation in Wellington. Contrary to some initially credulous reporting, her claim that she only wanted ‘informed consent’ on the PCR test was far from the full story, writes Dylan Reeve.

Last week a story popped up in a bunch of the main New Zealand news outlets all at once. It was the tale of an Australian vet nurse who had been held in New Zealand’s managed isolation system for almost a month. All she wanted (the news reports told us, because that’s what she told them) was answers to a few questions about the Covid-19 test she was being asked to consent to.

The story landed in multiple spots at once because it had originated with Radio NZ News which has content sharing agreements with other major news outlets. So the story from RNZ’s website was quickly republished on Newshub, NZ Herald, TVNZ and Stuff.

Lucinda Baulch arrived in New Zealand in late January as the guardian of three children she’d been fostering for Child Protection Australia. The children were being moved to New Zealand, and she believed, as their established foster parent, that she was the best person to escort them.

The news reports were entirely based on Baulch’s own account of her story. They even repeated, without clarification or dispute, her claim that she had “seen research from Portugal where a court had ruled the PCR swab was 97% ineffective”.

According to Baulch, she had simply “requested additional information from the facility – but had so far not been provided with any”.

The reader was left with the impression that an innocent (veterinary) medical professional was being forced to spend an additional two weeks in isolation simply because the government couldn’t (or wouldn’t) answer some simple questions. Of the testing, she said innocently, “if you can prove with evidence, I am a loyal advocate”.

When I read Baulch’s story I was immediately sceptical. It was the claim of 97% ineffectiveness and the reference to a Portuguese court case that set my bullshit detector on high alert. New Zealand has run more than 1.6 million Covid-19 PCR tests, and in that entire time only around 2,700 have returned a positive result – there’s no way a 97% ineffective test could deliver that outcome. And courts aren’t well known for their ability to deliver scientific conclusions.

So I did what I wish a journalist had done at the time – I Googled Lucinda Baulch. It was immediately clear that she wasn’t coming at this from an impartial place.

The first thing I found was a statement from Baulch about police actions at the ‘Freedom Day’ protest in Melbourne. While it didn’t say anything specific about her beliefs, it did make it clear that she arrived at MIQ with some Covid-denial pedigree.

Soon after that I found the text of a “press release” from Baulch on the YouTube channel of Northland conspiracy theorist Karen Brewer, a woman who recently gained worldwide media attention after an Australian court ordered that she pay $875,000 to an MP she’d accused of being “a member of a secretive paedophile network”.

The press release was rambling and a little unclear, but among other things she claimed to have done “many hours of research on this subject, and feel more qualified than Ms Ardern” and that the government needed to “prove the lethality of the virus to those that are not dying already”.

Brewer’s YouTube channel also included 10 episodes of her podcast that feature Baulch as a guest. They provide hours of Baulch in her own words, often expressing agreement with Brewer’s extreme ideas. In her first appearance, introduced by Brewer as calling in from “in one of the quarantine camps, for the Covid hoaxes,” Baulch describes herself as “someone who is very woke about all of the Covid information, I wouldn’t take tests, wouldn’t do the quarantine, wouldn’t wear a mask.”

By the end of that first episode we see Baulch nodding enthusiastically as Brewer goes on an anti-vax rampage: “all the governments want you to use [Bill Gates’] vaccine to jab into you so that you can become a mark of the beast bloody nano-technology slave to their system!”

In episode two Brewer asks Baulch to find out the name, school and parents of the Child Protection Australia official who signed off on day 12 Covid tests for the foster children because “Freemasonry is a worldwide web!”

It’s also in episode two that Baulch really gets into the details of her brilliant scheme. In conjunction with Australian sovereign citizen activists she has drafted a “notice of conditional acceptance and liability” which sets out the criteria under which she’ll consent to a Covid test. Beyond just the simple concerns she outlined to Radio NZ, she explains that she’s demanding proof that the Covid virus has been identified, proof that mask wearing is safe and effective, proof that “nothing can be implanted in you” when they do a Covid test, proof that it’s 100% accurate, and proof that Covid death statistics are accurate.

It’s a big list, and one that is simply outside the ability of the Ministry of Health to meet – it’s clear that she would reject any evidence they presented. But later she reveals one even bigger zinger in her test contract: a performance fee!

In episode three, after being introduced as being “in the FEMA camp in the Grand Mercure in Wellington,” Baulch announces it is day 14 of her MIQ stay and having watched the bus depart she is now being “unlawfully detained at the threat of arrest if I leave”.

In episode four Baulch opines more on masks, “I believe it is child abuse to wear a mask in front of children!”

And honestly at this point I really couldn’t be bothered watching any more of these videos. It had only taken me a few minutes of Googling to realise Lucinda Baulch’s actual concerns weren’t what she’d initially claimed to journalists. Her appearances on Youtube only confirmed it: she’s conspiracy theorist and a Covid-denier who used New Zealand’s MIQ service to promote her agenda.