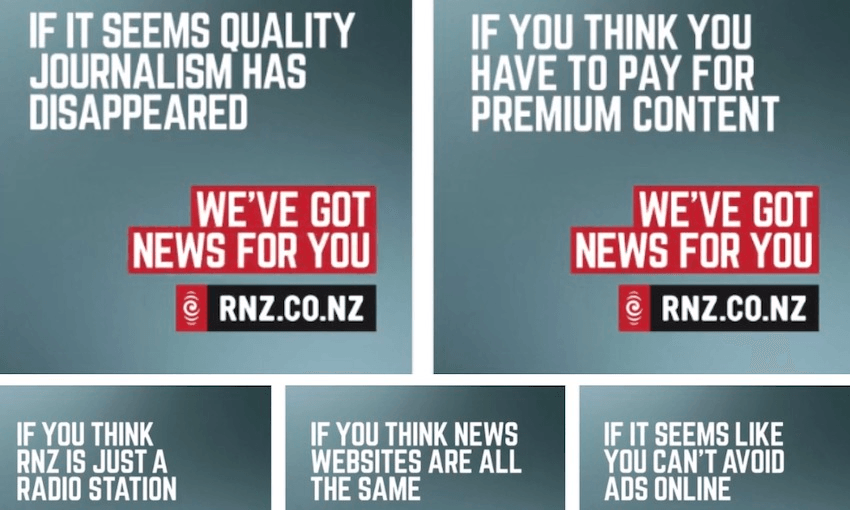 Advertising that hates on other advertising (image: compile)

‘The first salvo in a war’: Senior Herald and Stuff editors hit back at RNZ attack ad campaign

Advertising that hates on other advertising (image: compile)

RNZ has launched a new brand campaign which takes explicit aim at its commercial competition, attacking both advertising-funded and paywalled news sites. The campaign is running on out-of-home media and as paid posts on Facebook, and has drawn incredulous responses from news executives in the private sector media, which has been dealing with well-documented difficulties due to the dominance of the digital advertising market by Facebook and Google.

The campaign asks “if you think that quality journalism has disappeared”, “if you can’t seem to avoid ads online” or “if you think you have to pay for premium” – what the Herald calls its paywalled stories – then suggests audiences try RNZ.co.nz.

“It clearly pits the government broadcaster against a struggling commercial sector,” said former Newshub head of news Hal Crawford. “That’s shortsighted – it feels like the first salvo in a war that RNZ doesn’t want to be fighting.”

Shayne Currie, managing editor of NZME, owners of the NZ Herald and Newstalk ZB, saw the campaign as a direct attack on Herald Premium. The paywall, launched in April last year, is central to its future revenue planning. Currie believes it is inaccurate to imply that audiences did not have to pay for journalism, one way or another.

“It’s disappointing and disingenuous for taxpayer-funded Radio New Zealand to somehow suggest New Zealanders are not paying for RNZ journalism or journalists,” he said.

Of particular concern to Stuff’s editorial director Mark Stevens was where the campaign is running – not just on billboards and bus-backs, but as a series of paid Facebook posts. Stuff itself ceased all paid Facebook posts in the aftermath of the March 15 attacks in Christchurch, which were livestreamed on the platform (as first reported by The Spinoff, a business funded by both advertising and its readers). Stevens said RNZ’s use of the social media giant is disappointing – particularly given that RNZ is entirely state funded.

“Using taxpayer funding to advertise on Facebook is wrong-headed and counter to supporting that plurality of media voices we’ve heard is in such need of protection,” said Stevens. “Especially when the domestic media here would have provided them greater reach than they’re paying a global platform with a questionable moral compass for.”

NZME’s Currie echoed the sentiment. “It’s gutting that RNZ is spending taxpayer money on a Facebook/Instagram campaign, encouraging audiences away from New Zealand-owned and operated media at the very time we are in a fight to sustain our journalism model against social media behemoths like Facebook and Google.”

The campaign is also running in other media formats, including podcasts and out-of-home media – with Stuff’s Stevens shocked to find a taxpayer attack on the advertising-funded Stuff site in the company’s own building.

RNZ’s campaign comes in the aftermath of a torrid 2019, in which the private sector media pleaded for government intervention to help it navigate to a viable future in the digital media era. MediaWorks put its loss-making TV business up for sale last November, citing the difficulty of competing against the government-owned TVNZ, which last year announced the suspension of its dividend for the foreseeable future.

Meanwhile NZME repeated its desire to be allowed to purchase Stuff – which has been for sale for over year by its Australian parent company Nine. A Stuff-NZME merger has been denied through both the Commerce Commission and the courts, seen by some as bitterly ironic, given that just last month broadcasting minister Kris Faafoi announced the exploration of the case for a merger between the government’s largest media entities, TVNZ and RNZ. Each competes for audience – and, in TVNZ’s case, revenue – with the private sector media, and a combined entity would likely be even more efficient at hoovering up news and entertainment audiences.

The RNZ campaign is notably more aggressive than prior work, which was more oblique (“drive, not drivel”, “news, not views”), and has had a far wider distribution. Part of the reason the new campaign caused such widespread disappointment is because it disparages not just the private sector media’s business models, but also its work (“If you think quality journalism has disappeared”). This jars with the much more collegial sentiments frequently expressed by RNZ CEO Paul Thompson.

Thompson, formerly executive editor of Fairfax NZ (now known as Stuff), wrote an opinion piece for RNZ in the aftermath of MediaWorks’ putting Three on the market last year, which emphasised the importance of plurality in media, and expressed sympathy for the challenges facing his private sector counterparts.

“Even if a New Zealand media company that relies on advertising or subscriptions executes the perfect strategy faultlessly, they still face big future challenges,” he wrote, also pointing to the importance of having multiple media players, across both public and private sectors. “No people, society or nation are truly independent unless they have access to a diverse range of trusted and relevant news, information and entertainment that is created for, about and by them.

“The essential ingredient is choice.”

The RNZ CEO went further in a 2018 article, where Thompson noted the impact of “the likes of Google, Facebook, Apple, Amazon and Netflix”, writing that “in this environment, public service media have a unique responsibility to help their commercial counterparts survive.”

The campaign seems at odds with those sentiments, seemingly sneering at other media outlets for having to make money through advertising or reader revenue. Instead of defining RNZ by pushing its hosts or its values, it instead seeks to denigrate the work and fiscal reality of others in the media.

The timing of the campaign is unfortunate. It comes after a month in which RNZ found itself subject to a media storm of its own, when audiences and its own employees revolted at news it was planning to replace RNZ Concert’s FM frequency with a youth network. After a week of protests, led by former prime minister Helen Clark, RNZ dropped the plans, with government ministers strongly implying that funds and frequencies would be made available which would allow allow RNZ to create the youth network while leaving Concert as it stands. It has left private sector executives with the impression that a minor furore at RNZ draws an immediate government response, while long-running issues in the private sector are ignored.

The Spinoff approached RNZ for comment about both the campaign, and its usage of the social media giant. “Along with most other NZ media, RNZ uses Facebook to maximise reach to target audiences,” said spokesperson John Barr.

The campaign had been running on Facebook since Sunday, yet the variation which pointedly attacked the Herald Premium disappeared not long after Stuff political journalist Thomas Coughlan tweeted it. Barr denied that it was in response to the storm. “This is one execution of a creative campaign that exists across multiple platforms with multiple tag lines and this particular execution will finish today. It was only ever due to have a short run.”

Despite the campaign having a relatively brief time on social media, it has left executives in the private sector media deeply disappointed in an organisation which had until recently presented as an ally. After a series of attack ads, the prior feeling of gallows camaraderie has vanished.

For more on the chaos of the NZ media, listen to Duncan Greive’s media podcast, The Fold