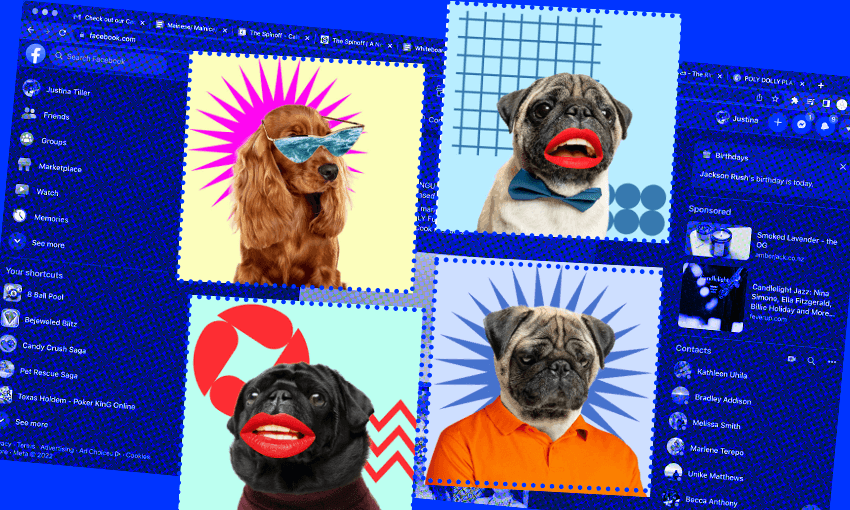 At least it crowds out the conspiracy theories, MLMs and anti-vax nonsense from people you actually know, says Emily Writes.

This story was first published on the author’s newsletter, Emily Writes Weekly.

Everywhere I look people are fretting over changes to the way Facebook and Instagram work (or maybe that’s don’t work?).

As somebody who has been repeatedly and relentlessly Zucked over many times in my career, I suppose I should be joining the chorus. Just yesterday, Zuckerberg and his army of incels deigned to send my book launch post out to just six people. The day before, Facebook had rammed ads on either side of my post about child sleep which reached 27,000 organically.

But I find myself thinking – surely, surely this is the death knell?

I loathe Facebook. And I’m on it every day. I hate Instagram slightly less and find I can enjoy it more when I’m in my stories and DMs with a locked profile. I’m also on that platform every day.

Do either of these platforms make my life better? Absolutely not.

I am terrified (possibly more than I’m terrified of climate change) that these apps will irreparably harm my children as tweens and teenagers. Not an empty fear given by its very design Instagram profits from, and encourages, social conformity and needing to “fit in” and Facebook is slowly poisoning us against each other with misinformation.

Zuck and Facebook’s execs know this: “Thirty-two percent of teen girls said that when they felt bad about their bodies, Instagram made them feel worse,” researchers said in a March 2020 slide presentation posted to Facebook’s internal message board (from the Wall Street Journal).

Instagram is literally causing our kids to harm themselves and each other. In its own research it found 13% of British users who had suicidal thoughts (and 6% of American users with the same feelings) traced the desire to end their lives to Instagram.

So I find myself in a conundrum: will I lose money and potentially my career if Instagram and Facebook die? Possibly. Big possibility actually.

Would it be worth my career ending if we didn’t have these platforms any more? Yes. Probably. Big probably actually.

In theory, ethically, we should be celebrating the end of Facebook, even if that would be a financial disaster for us. Even if it takes away our ability to discover our cousin is an anti-vaxxer who thinks Jacinda Ardern is a communist who hates truck drivers.

The deaths of these platforms might also push toxic influencer culture into the metaphorical wood-chipper too. A move that I would celebrate with every fibre of my being.

Dozens of times this week I’ve seen influencers share a post that says, “I just want to see my friends online”. They’ve encouraged their followers to share the same post and even write to Instagram to save their beloved platform. A platform that has banned black content creators for having black bodies and censored POC creators. A platform that has harmed sex workers by using sex trafficking legislation as a weapon. A platform that has basically aided and abetted the harassment of trans and nonbinary people, then removed their content or used the alogorithm to censor them.

But aside from that, this message from influencers is disingenuous. The inference is clear: “I’m your friend, you want to see me.”

But influencers and businesses and companies are not in it to make friends with their clients and customers. It’s like your workplace saying you’re one big family – which is only true in that your family and your workplace is dysfunctional. It’s all marketing. Chat to me, engage in my ads, and we might be friends!

This push to view followers as friends by influencers is part of the parasocial relationships they cultivate then complain about for content.

We lost the Facebook and Instagram that was about following friends a long time ago. These days people with 100+ family and friends following them view themselves as micro-influencers. Everything is an ad.

Most of my friends do not and have not posted anything but memes on Instagram for a long time.

It took me ages to find anything in my feed from my friends, and most of it was “I have Covid” or “I’m in Fiji” which is jarring enough that I could have done without it.

Facebook has been garbage for us for ages is what I’m saying.

Instagram has been feeding me the most illogical garbage known to man for months and months now. And I eat it up like the slack-jawed burnt-out neurodivergent millennial that I am.

This morning I watched someone press the stomach of a stingray and I watched baby stingrays shoot out of the stingray like it was a ravioli maker.

Never in my life have I shown even a passing interest in birds.

But this is a nice bird.

Would I choose being shown this nice bird over my friend’s dad sharing a post saying children these days are far too coddled? Yes. I would pick this bird.

Next up was this, complete with illogical “my heart is melting. <3” commentary.

This dog is clearly, clearly saying that he was once proud and mighty, and he does not deserve to be in a tie and faux shirt and waistcoat combo. This dog is saying “look, I care about you Greg, but this is a step too far. I’m pleased you and Stephanie have found each other, but I’m a dog. I want to lick my balls and chew on pig ears. That’s it.”

Would I choose this dog over my aunt sending me a post that says a new study has found cucumber could treat type one diabetes? But the study only had two people in it and found cucumbers did nothing and it was actually about type two diabetes? Yes, I would choose the sad dog who doesn’t want to wear human clothes.

I will never give up on my dream for my job to be “Muscle Inspector” on the set of all Marvel and Alexander Skarsgard films. It is something I really want after all.

Do I want this quote served to me over an announcement from a friend from high school that she’s selling essential oils and everyone should go organic even though I distinctly remember doing drugs with her in high school those drugs were not organic? Hmmm maybe. Undecided.

And then finally. More farken birds.

Are they not splendid? They are very splendid. Is Splendid Fairywren not the best name you could call these beautiful birds?

They are beautiful birds.

Who am I to disagree with the mighty algorithm?

At least these posts don’t make me want to set myself on fire.

And if they put us one step closer to burying Facebook and Instagram on the second and third hole of Donald Trump’s golf course then quite frankly:

*Does the Lizzo TikTok dance*

This story was first published on the author’s newsletter, Emily Writes Weekly.