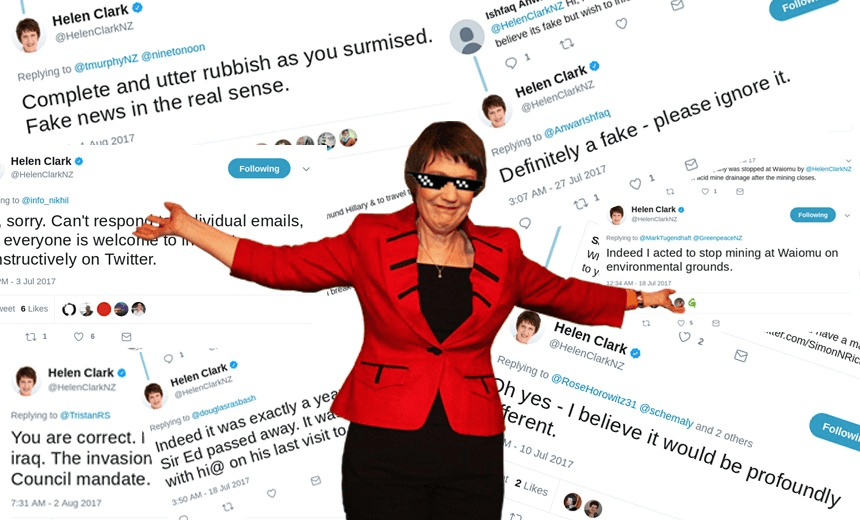 Summer reissue: Helen Clark is on a permanent Twitter AMA

Most world leaders are content with typing their own name into Twitter, or coining new weird words. Not Helen Clark, who solves pub arguments and affirms her past deeds, writes Alex Casey.

I’ll never forget the first time Helen Clark interacted with The Spinoff on Twitter. I think it was a fave, or maybe a retweet. Maybe she replied to something. Okay, I’ve forgotten almost everything about it – apart from the fact that it almost definitely happened. Over the nearly three years we’ve been knocking about the internet, it still sticks out as one of our most glorious celeb interactions. I’m saying that knowing full well that Fran Drescher retweeted us recently.

But I am a fool because, as it turns out, a precious Helen Clark Twitter interaction is a bloody dime a dozen these days, cropping up about as often as a discount fidget spinner or a male broadcaster with opinions about party leaders’ wombs. At seemingly random intervals, Helen will hit the tweetdecks with all the gusto of Kanye West on a rant about buttholes or Brian Tamaki losing it over horses. But what she’s contributing is even better.

Who can forget this iconic interaction?

She wasn’t even TAGGED for crying out loud, a dangerous game that puts her a a stone’s throw away from doing the funniest thing humanly possible. Or how about just a few days ago, when she reached out to a pub punter who was trying to settle an argument with a mate? Close Google, set down that Encyclopedia Britannica, shut up Siri, it’s open season at Aunty Helen’s endless AMA:

Wow. Just wow. Having Helen Clark wade into your debate over a frothy brew is a) the most New Zealand shit of all time and b) just one of the many times that our own national search engine/ex-PM has given Jeeves himself a run for his money. She’s a fact checking machine, with a zero tolerance policy for fake news.

And look, if fake news can walk itself straight into the nearest trash compactor, there’s a special place in hell for people who try to impersonate Helen Fucking Clark on the emails.

Aunty Helen’s serving up piping hot catfish for tea and she doesn’t care who knows it. And if that worries Nev and the gang, look out IMDBPro – Helen’s coming for your trivia pages too:

Ain’t no historically inaccurate feature films getting past Helen. I just pray she never watches The 300 or our feeds will be well and truly clogged. And, when someone inevitably makes the Sunday Theatre biopic of her life, rest assured Helen will indeed be watching like a hawk to confirm every detail.

Indeed. But why is it that Helen Clark is so open and available online? How can the fifth most influential woman in the world, and one with a bloody festival film out, possibly have time to reach out to all these nimrods on Twitter too lazy to open a search engine?

I’ll tell you why. Or I’ll at least tell you why I reckon and wait for Helen to correct me: she’s on a long-ass train journey with a whole bunch of time to kill.

Anyone who follows Helen on Snapchat – and who the hell are you if you don’t – will be used to being charmed on the daily by her tourist snaps of what could well be every location in the entire world from start to finish. I highly, highly recommend it.

I mean, look at this turtle rock. Bask in the wholesome content. Warm the cockles of your cold dead heart with these goddamn emojis. We have had our own Cher this whole time, right under our very noses.

Oh, and welcome to Helen Clark’s online botanical garden, just by the way. Entry is free and the closing time is absolutely NEVER:

The most soul-stirring thing of all is that you can bet your ass she is paying top dollar to post all these blooming emojis and glorious travel snaps – as well as all your burning questions answered quick smart – from whichever remote rural town run by rock turtle overlords she is operating from.

So while Helen Clark pours that hard-earned UN dollar into providing you with the best travel snaps and turtle rock pics that your money doesn’t even have to buy, you might as well make the most of our most accessible ex-PM. There’s an election on the way and everything’s electric and confusing and exciting all of a sudden. Now is the time: ask Helen anything.

And if you need to fact-check that, she’s even said it herself.