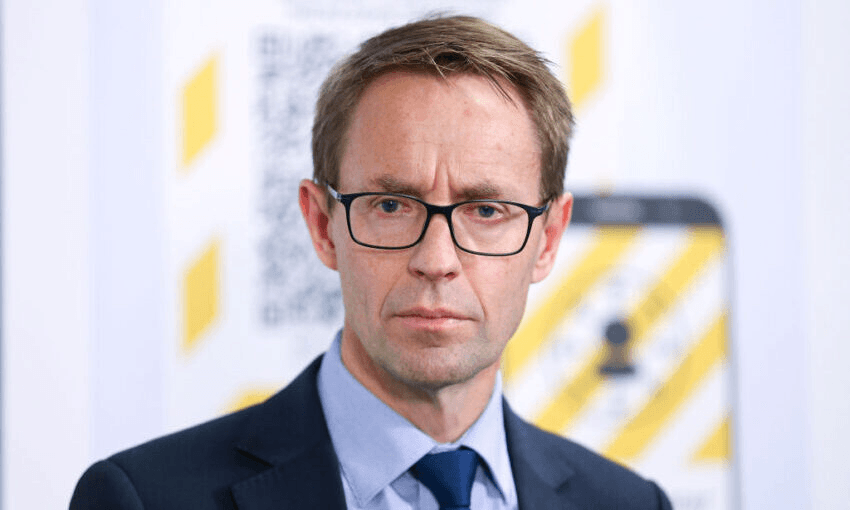 Ashley Bloomfield finishes as director general of health at the end of July. (Photo by Hagen Hopkins/Getty Images)

Ashley Bloomfield finishes as director general of health at the end of July. (Photo by Hagen Hopkins/Getty Images)

The faked letter, which has spread across Facebook, Twitter and Telegram, peddles the falsehood that unvaccinated New Zealanders face a $15,000 fine or jail time.

A fabricated letter, purporting to be from Ashley Bloomfield, the director general of health, has been circulating liberally on social media for almost a fortnight, having received a major boost in the last few days from Donald Trump super-fans and adherents of the QAnon conspiracy theory.

Typed beneath Ministry of Health letterhead, the message makes the baseless claim that the Covid-19 vaccine will become mandatory across New Zealand on June 1. In fact, the opposite is true – vaccine mandates were never universal and are on their way out, with most scrapped early last month. In many hundreds of social media posts viewed by The Spinoff across Twitter, Facebook, Reddit, YouTube and Telegram, the letter is presented with superimposed red type that falsely states, “NZ ISSUES $15,000 FINE OR 6 MONTHS JAIL FOR THE UNVAXXED.”

The contents of the letter appear to be a mishmash of historical instructions mixed with original disinformation. Quite apart from the untruthful central claim, it is immediately apparent from the language of the letter that it is bogus.

“The claim is false,” said a ministry spokesperson. “We have been alerted to letters like this one or similar before. We can confirm this is not an official letter from the Ministry of Health.” Details on the vaccine requirements for people in certain roles in the border, health or emergency service workforces can be found here. “We encourage people to only go to trusted sources of information when seeking to find out more about the virus and the vaccine,” said the spokesperson.

The letter has been circulating among anti-vaccine, anti-mandate and misinformation-peddling groups on social media since the start of the month. It has gone up a gear in recent days, however, in New Zealand and around the world, driven by shares from US-based QAnon and pro-Trump accounts.

A tweet from an “UltraMaga” account that included a photograph of the false letter and wrongly claimed “New Zealand Government sending letters to unvaxxed people telling them that if they are not vaxed by the 1st June 2022, or they will face $15,000 fine or 6 months in prison”, had as of last night been shared more than 7,000 times, which translates into hundreds of thousands of views. It is hard to miss on Telegram, where those propagating the disinformation include the “Qtime Network”, in a post that has been viewed more than 70,000 times.

Among those who have shared the misinformation is Joey Gilbert, who is currently in the Republican Party primary race for the Nevada governorship. “Population control,” was the would-be politician’s assessment on his blue-tick-verified Twitter account.

Comments on the various posts across social media are a grab-bag of credulousness, venom and hate speech, with countless comments echoing some variation of “Meet the new Nazis/New World Order tyrants!”, demanding “Nuremberg 2.0” trials and executions and unvarnished, explicit death threats. “Dig out your guns guys, get ready for war,” said one Telegram user. “Now they need some high profile assassinations,” said another. Most appear to be posted outside Aotearoa.

While many New Zealanders judged the letter to be authentic, sharing it on Facebook with messages such as, “Shits about to get real ugly. Stand your ground to my ‘PURE BLOODS’, some in the New Zealand “freedom movement” weren’t being suckered.

“Use discernment please. Look harder at this printed out sheet … Please don’t fall for it,” wrote “Sue”, a prominent livestreamer at the parliamentary occupation and other events before and since. In a post on Telegram, she pointed out the dubious footer on the supposed letter, which included hyperlinks that are tricky to click on printed paper and a purported Bloomfield signature that didn’t match other examples from the director general of health. She missed the mark, however, with the claim, “Not to mention he’s retired from the ministry.” Bloomfield stands down on July 29.