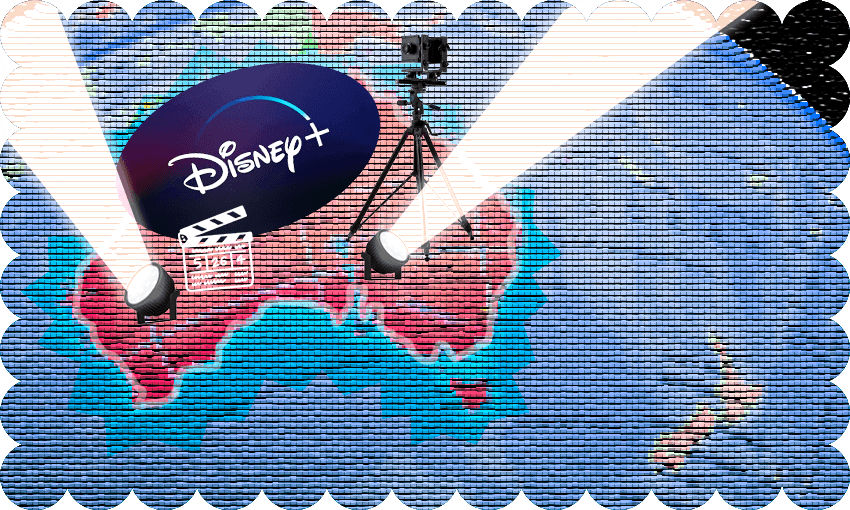 The slate is great for Australia – but shows just how much Aotearoa is being ignored in the new streaming environment.

Disney+ is one of the world’s biggest streaming platforms, moving from a standing start on launch in 2019 to a global subscriber base of 138 million. In fact, at a recent earnings call, it added a healthy 7.9m subscribers, making it a rare bright spot in the gloomy streaming market, with Netflix’s growth screeching to a halt casting a shadow over what was once a frothy category for investors.

So when screen industry trade press Deadline ran the following headline, it should have been something of a landmark day for streaming fans on both sides of the Tasman.

A slate, within the industry, means a clutch of newly commissioned shows. So the headline suggests we’re in for original dramas, made here, for audiences here. This is hugely exciting! Particularly for the younger half of New Zealanders – Disney+ has explicitly targeted families with its content, with a raft of children’s content, a demographic-spanning smash in the Mandalorian, from the Star Wars cinematic universe, as well as critically-acclaimed shows like WandaVision and Only Murders in the Building. Younger New Zealanders are also the generation that has largely abandoned traditional linear television, with around half as many aged 15-39 watching linear daily versus a streaming service.

This is part of what has seen Disney+ grow from a standing start to the point where one out of every 10 of us use the service daily, according to research from NZ On Air. This might not sound like a lot, but it really is – the same research has TVNZ 2, with a multi-decade head start, reaching just 14% of us.

So let’s dig into that slate and see what Disney+ has coming for us. There’s The Clearing, starring Guy Pearce and Miranda Otto, about an Australian cult. The Artful Dodger is set in 1850s Australia, and functions as a sequel to Oliver Twist. Last Days of the Space Age is set in 1970s Perth during blackouts, as Miss Universe and the International Space Station lurk in the background. There are documentaries about the rise of women’s Aussie rules and soccer, a show about hunting Aussie shipwrecks and surfing, a show with Australian food stylist Donna Hay and a new series about toys from Rove’s production company.

It’s a lot of commissioning budget flowing into the region, and while there’s some filler, there’s also a decent chance that among those is a streaming hit, shot and commissioned in our part of the world. But it’s also obvious that these are true-blue, fair-dinkum, throw-another-shrimp-on-the-barbie shows by Australians for Australians. In fact, the only link I can see to New Zealand is that The Clearing is adapted from Melbourne-based New Zealander JP Pomare’s In The Clearing – but even that is based on the true story of Anne Hamilton-Byrne’s The Family in Melbourne.

To be fair to Disney+, true New Zealand content could still be on the horizon. In a press release announcing the first slate yesterday, Kylie Watson-Wheeler, senior vice president and managing director of The Walt Disney Company in Australia and New Zealand, said, "Our second wave of local and loved content is taking great shape, with many more shows in various stages of development, including fabulous original concepts coming out of New Zealand."

But as of right now, there's nothing. I note all this not out of envy, though it would be nice if there was a single show made here, but more because this indicates exactly what kind of future we’re walking into. One in which our viewing time is dominated by excellent shows made all over the world, on massive global platforms, with very little made here, for here.

Because as barren of New Zealand content as this Disney+ slate is, it’s far from alone in Aotearoa having fallen off the map. The biggest subscription streaming platform, by far, is still Netflix – and it has just a tiny handful of shows from New Zealand, most buried deep in its catalogue. Of the other major streaming services available here, Apple TV+ is much the same in terms of where its originals are produced. Amazon Prime is an exception, in some respects, in that All Blacks documentary All or Nothing and its lavish Lord of the Rings adaptation both come from here (though LOTR decamped as soon as it could, citing costs and border issues). Each production is targeting international audiences, though.

This is in part what’s driving the merger of RNZ and TVNZ – a sense that as we shift to digital we lose something of our culture and the ties which bind along the way. And that a scale digital platform owned by the state is the only way to resist those forces. Yet NZ on Air’s research shows just how difficult this will be. TVNZ registered a 17% daily usage across digital, while RNZ came in at 12%. Even if it managed to double TVNZ’s number – a heroic effort in a saturated market – that would still be just a third of the audience.

What some in the screen sector are increasingly thinking about is that instead of building it and hoping they will come, we should instead be asking scale streaming operators to devote some proportion of their local revenues to commissioning local content, especially local content which reflects our unique cultural identity, our Māori stories. South Pacific Pictures is one of our biggest local production houses, behind Shortland Street and Whale Rider, and much else in between. Its managing director Andrew Szusterman wrote for The Spinoff last year that if these streaming services want to operate here, there needs to be some cultural cost of entry.

As of now, what media policy bandwidth exists in government is consumed with the merger. But the non-existent returns for New Zealand in Disney+’s debut regional slate suggest this issue is not going anywhere. It sits alongside the massive deals struck for Australian news organisations versus the paltry returns for local news publishers as a bleak window into the tech-dominated future, where Australia uses its scale to get good deals and we get whatever is left over. Because as of now we’re approaching a scenario in which New Zealand is perceived by the platforms as a kind of East Tasmania – some isolated and culturally barren islands which don’t have enough economic leverage to justify telling stories of our own.