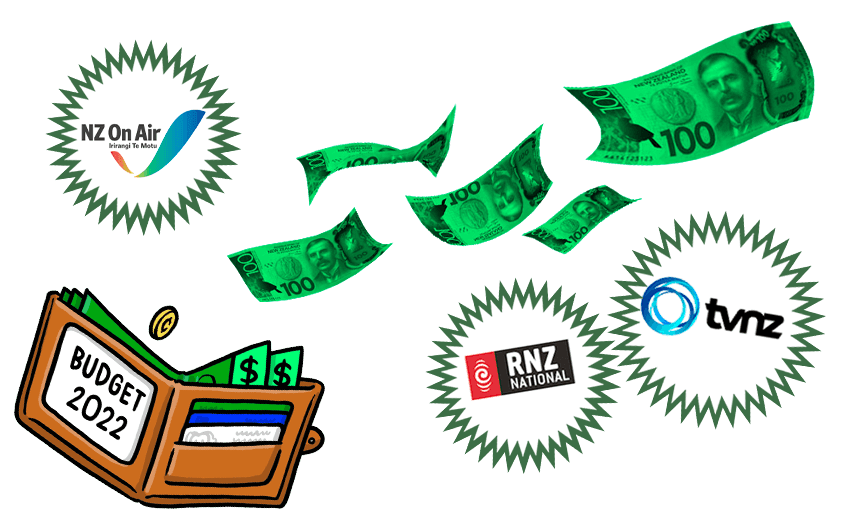 Budget 2022: The big, hybrid public broadcaster will be funded directly for local commissioning, sources have told The Spinoff. That means a shrunken NZ on Air, and a seismic change in our public media funding model, writes Duncan Greive.

Since its creation in the late 1980s, NZ on Air has been the most important player by far in delivering public funding for local television, radio and, latterly, digital media. Next week’s budget is likely to signal the end of that extraordinary dominance, however, several well-placed sources have told The Spinoff, with the merger of TVNZ and RNZ into a single, super-sized public broadcaster. The new public media entity – or “PME”, in the shorthand of government and media circles – is expected to be funded directly by government to support local content that cannot be fully commercially bankrolled, they say.

As it stands, RNZ is bulk funded through NZ on Air, while a raft of local content on TVNZ – everything from Q+A to The Casketeers to One Lane Bridge – hinges on contestable funds from NZ on Air. The reforms would see the new public broadcaster commissioning major dramas, comedies and other content for the first time in more than three decades. Out of the funding patchwork for the PME, NZ on Air’s remit and budget would accordingly shrink.

How much by will be revealed on budget day – those spoken to by The Spinoff suggest that there is likely to be some increase in funding to NZ on Air which will partially offset the dramatic loss of the pūtea which previously flowed through it to TVNZ and RNZ. Key to all this intrigue is the establishment board setting up the PME, which made the recommendations which will flow through cabinet and into the budget which funds this work. For many in the industries that create scripted and factual content that reflects Aotearoa back to its people, these changes are as significant as the merger itself.

If the budget follows through on these recommendations, the reforms will have a major impact on New Zealand’s near-unique system of funding public media content, which has proven surprisingly durable for a radical reform enacted by future Act party founder Richard Prebble. Rather than a single public media platform like Australia’s ABC or Britain’s BBC, New Zealand has a decentralised public media model, in which private production companies pitch content to TV channels, radio stations and online platforms. If the pitch is successful, those media companies then support the application to NZ On Air, which makes the ultimate decision about whether to fund the production of that content. While there has been a persistent critique of the system over decades, and the previous Labour government tried reform through a charter, nothing at this scale has been attempted since the days of the NZBC.

The change means the end of what one source spoken to by The Spinoff called the “sham contestability” of the current set-up. The “sham” part is that because television has always taken the vast majority of the funding pie, the TV networks could rely on a reasonably predictable amount of funding for their content, particularly when it came to the renewal of successful shows. This meant the actual amount of truly contestable funding was far lower than the $180m budget overseen by NZ On Air. Crucially, sources suggest that the new PME will be unable to apply for NZ on Air funding – eliminating the potential “double dipping” between two pots of public media funding.

What does it mean for TVNZ/RNZ?

If enacted, this will be cause for celebration in commissioning departments at both entities. No longer will they have to wait for the next NZ on Air funding round, and then wait longer for a decision. Instead budgets will be concrete and knowable and – as one source spoken to by The Spinoff emphasised – this will have a huge impact on the agility of the new entity.

It will be able to commission content far more confidently and at greater speed, and keep teams together that might otherwise have had to wait for long periods between funding rounds – particularly if the network was putting up an important project with which another idea might be seen as competing for funding. The relationship between TVNZ and NZ On Air has not always been cordial, and this will remove a persistent headache and tension point from the lives of the PME’s commissioners.

What does it mean for NZ On Air?

A clue to this outcome came on an unheralded note on the Ministry for Culture and Heritage’s website in March. “While NZ On Air will not directly fund the new entity, it will still have an oversight role by working collaboratively with the new entity to identify duplication and gaps in the provision of public media content” – indicating a not-uncomplicated relationship between the PME and NZ on Air, in which each will have some visibility but not control over the productions being funded. How this will work in practise is hard to imagine, as neither is likely to want to back away from supporting content tagged for funding.

In the main these changes are likely to make NZ on Air’s job more manageable. While it is inevitable that its overall budget falls, the funder will in some ways have greater control over what is put out into the private sector media than ever before. This is in part due to an increase in a budget that now has to serve everyone except the PME, but also because it will no longer have the unofficial constraint of having to keep a certain proportion of its budget allocated to the major TV networks. With a new system for measuring audience and impact nearing completion, it can more confidently fulfil its various missions around diverse audiences and storytelling in a less constrained way. (NZ On Air declined to comment for this story, as did broadcasting minister Kris Faafoi.)

What does it mean for the production sector?

Ultimately, under the current system, all roads lead to NZ On Air. With the new system an array of incredibly powerful PME commissioners will appear and start taking lunches. They will have their own budgets and fiefdoms and an ability to make the kind of fast, responsive decisions that have been much more difficult under the current system. The production sector will be extremely pleased to make the new commissioners’ acquaintance.

Yet increased budgets sector-wide, and a general desire to meet audiences underserved by the current public media system (read: young, Māori, Pacific and pan-Asian) everywhere should mean a greater openness to innovation and more opportunity for startup content companies to grow if they can prove a path to audiences.

One big caveat: all this is predicated on the PME making use of the production sector. Historically TVNZ’s internal production – shows it makes itself – has waxed and waned, while RNZ has made almost all its content in-house. Will the new entity look to return to a situation where it makes much more of what it distributes? It’s entirely possible. In which case the production sector could find a far less joyous scenario than it has been banking on.

What does it mean for Three and the rest of the private media?

Three’s new owners Discovery have a pretty good position – they can commission content funded by the taxpayer, and if it’s a hit, likely pick up the rights to screen it on Discovery channels and platforms all over the world. All the other private sector media players will be open to this new arrangement on the face of it – particularly those which operate online. The TV networks have always dominated funding, which has not grown commensurate with population over the past 30 years.

Without TVNZ and RNZ in the pot, and new management at Discovery and Sky, the old entrenched players are gone and a truly contestable era, with fast flow through different shows and a greater potential for online content, is upon us. The chances of new platforms being founded, with more social-first shows or direct-to-content-creator funding, have increased exponentially as a result. (Also increasing: the blurriness of the line delineating Creative NZ, NZ On Air and the NZ Film Commission – this could be the next reform battleground).

What could it mean for viewers?

It will certainly mean more NZ content is created, likely a greater volume than at any point in our history. The trick will be getting us to watch it. Measuring like-for-like audience size anywhere is difficult, but it’s crucial that some standardised metrics are agreed across all parties here – because every future budget will become a contest between the PME and NZ on Air, with both competing for audiences – and for the most compelling narrative about how well they serve the broadest possible swath of Aotearoa. After years of dithering – remember RNZ+? – there is finally potential for some clarity around the future of the our audio-video media. And with it, a chance for an epic new contest for attention.