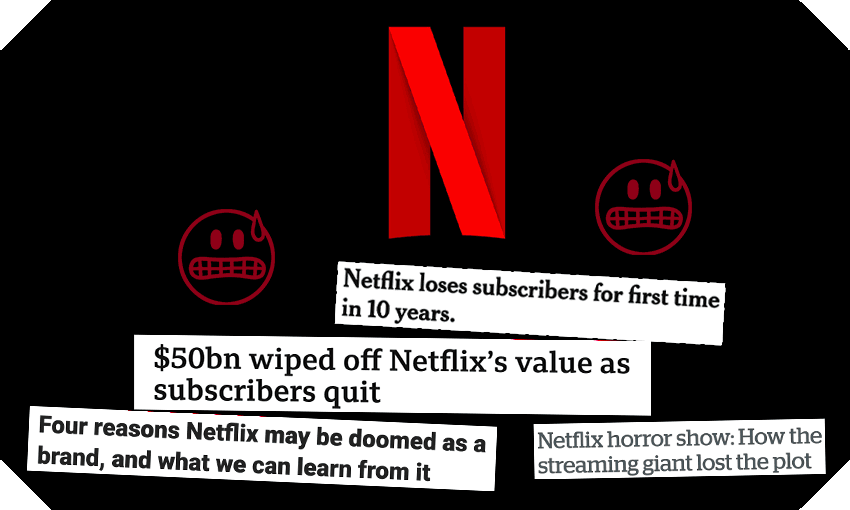 Streaming is looking like it might already have peaked. This should scare those tasked with building our shiny new public media entity, writes Duncan Greive.

The comparison will have stung. Netflix has for 20 years been viewed as an engine of innovation just this side of Apple, as the tech company that created subscription streaming, pioneered dropping whole seasons of shows at once and commissioned acclaimed original shows before others even had a product. Last week it was being widely compared to cable – the unloved, price-gouging linear TV distribution system it has spent its whole lifespan disrupting.

Why? Because, for the first time in a decade, it lost subscribers – just like cable has been doing for years now. The number involved is tiny, just 200,000 out of a global total of over 200 million, and if it hadn’t pulled out of Russia it might have eked out a positive result. But its share price has cratered, taking its market capitalisation to under US$100bn, or around a third of its level last November. As shares are a bet on the future prospects of a company, it was the market saying that it believed this was not a blip but a new reality – that the endless growth was over, and the company might already be far closer to its ceiling now than the 500 million or billion subs it envisaged.

The reasons Netflix has stalled are varied, and knowing exactly how much each contributed is impossible. Some of it is growth pulled forward as we locked down and became extremely online through the pandemic. There is now strong competition in streaming, after many years of Netflix being the only scale operator. The company itself blamed password sharing and inflation. The end of the pandemic has spawned an “attention recession”, as people leave the house and stop staring at their bright rectangles so much. The most hurtful critique is probably that it has lost its edge – that in trying to be all things to all people in all markets it has become no one’s favourite streamer, and therefore easier to cut.

The bad times are not just here for Netflix

A month ago the cable news pioneer CNN launched its streaming service, CNN+, featuring the likes of NYU professor and podcaster Scott Galloway and ex-Fox News anchor Chris Wallace alongside an array of CNN stars doing some quite strange shows, like Jake Tapper’s Book Club. The launch was a huge deal for the network, and had a budget well into nine figures. It didn’t matter – the service has already been shut down by the network’s new owners, Discovery, which favoured one monster streaming service wrapping all its brands over selling a number of smaller boutique offerings.

The abrupt end has further chilled the so-called streaming wars, which was one of the biggest stories in business a year or so ago, when worldwide entertainment brands like Disney and HBO began launching lavishly-funded new services aiming to take on Netflix. All have suffered major setbacks to their stock price, which collectively expresses a doubt from investors that the market will scale to be as big or profitable as once thought. There is also a fear that consumers will cycle on and off from subscriptions to catch the latest buzz show, meaning high marketing costs, while bidding for talent and shows will remain ferocious due to the number of players in the market.

How does this impact New Zealand?

As of today the only scale global streamers available here are Disney and Netflix, though it seems inevitable that Three’s owners Discovery, newly merged with WarnerMedia (HBO, CNN and a host of reality shows) will arrive here soon. Beyond the two internationals the main local streaming services are Neon, a paid service owned by Sky TV, and TVNZ OnDemand, a free service supported by advertising. Neon currently has relatively long-running contracts to play movies and shows from multiple premium services outside New Zealand, and it remains to be seen whether it can retain those rights or if ultimately they will revert to their international owners and be sold direct to audiences.

A much more pressing concern is the fate of TVNZ OnDemand. It is the natural centrepiece of the forthcoming merger of RNZ and TVNZ – the biggest state-owned digital property and the most successful local streamer by far. Its last annual report boasted of 269m streams over the past year, and an impressive 40% increase in digital revenue (while declining to say exactly what percentage of its $343m in revenue came from digital advertising).

It recently noted that streams have increased to 330m on a rolling annual basis, showing further strong growth. Still, it is worth assessing what that number means in different contexts. It’s around 66 streams per person – which, even if we generously assume every stream is completed, is little more than one episode streamed per week. Compared to the hours of linear television once consumed by the average New Zealander every single day, the drop-off in advertising inventory is precipitous – particularly when you consider that there are currently far fewer ads shown on streaming versus linear.

We are in the midst of a great behavioural migration from one set of legacy media (print newspapers and magazines, linear television, AM and FM radio) with a very limited number of providers to internet-delivered media, with infinite providers. And every time a consumer flips from relying on the old form to the new one they become far more fickle. For TVNZ and the incoming merged public media entity (can we please have a less clunky name?), this means a far lower income per user. Worse, every year we get a new cohort of 18-year-olds popping out of high school and starting a consumption journey – that is, becoming serious targets for the advertising that TVNZ relies on for income. And hardly any of them watch linear television.

The most difficult task for the new TVNZ-RNZ merger

The reason TVNZ and RNZ are merging is because everyone acknowledges that neither is doing all that well at reaching young people (to be fair, hardly any New Zealand media are, but the state has a moral obligation to fix that problem, whereas the private sector only has a business incentive). One recent data point showed just how difficult that job will be.

In a survey by advertising giant Publicis first reported by the LA Times, “nearly half (48%) of video watched by Gen Z-ers [those aged 13-26] was made by content creators outside of the world of traditional entertainment professionals. Meanwhile, Gen X consumers’ viewing was 72% professionally produced.”

This is US research, but echoes NZ on Air’s Where Are The Audiences? Survey which shows online video as reaching four in five 15-39 year olds each day – but that NZ On Demand (largely TVNZ) reached just one in five. These results get amplified as audiences get younger, with On Demand video (dominated by YouTube) consumed by over 90% of 15-24 year olds, while NZ On Demand comes in at 19%. These numbers tend to grow more stark when you layer in other factors, like secondary languages or ethnicity.

These compounding trends show the scale of the problem which sits in front of the newly appointed establishment board for this entity. Professionally made content is getting more and more expensive to make, and more tightly-held by massive international corporations. Consumers seem to be reaching their limit on the number of services they will use. And young people in particular curate their own idiosyncratic consumption habits and increasingly skew away from the kind of professionally produced news and entertainment content which big media companies like to make and distribute. Worse still, there was an extremely strong bias to local baked into the old model, whereas under the new reality it’s as easy to watch content from the US or Korea as it is from Aotearoa. That’s an extremely challenging bedrock which will never change.

To succeed might be impossible, but the best chance at it will require a willingness to meet audiences where they are, be very creative about how they interact with creator communities, measure everything and be ruthless about cutting what does not work. It will be very expensive, and require two entities which have historically liked to control every inch of what they create to cede some of that.

It’s a very difficult (and inevitably expensive) task, and one which should have started in earnest a decade ago. But the current status quo, of funding skewing strongly toward the needs of older pākehā New Zealanders, is simply not sustainable – not least because even those consumers are abandoning linear at increasing rates. It all adds up to Netflix’s serious problems being ours too.