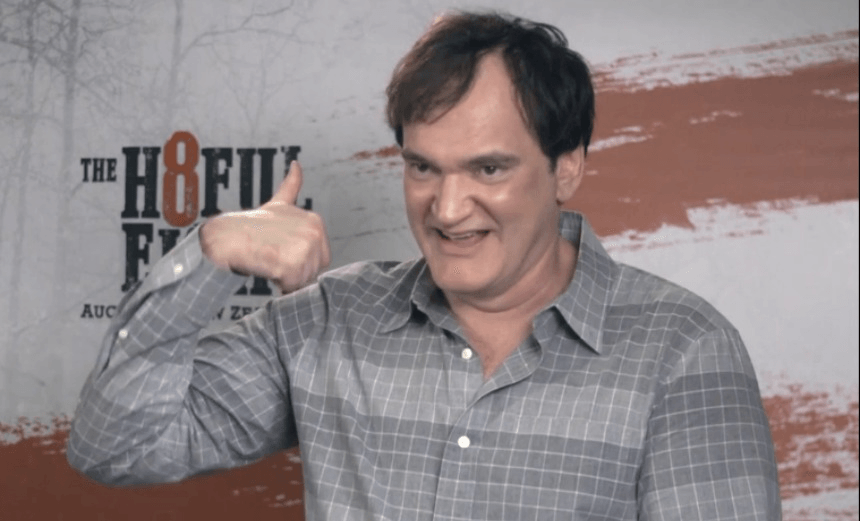 Alex Casey recounts the harrowing experience of waiting to interview Quentin Tarantino (scroll down for part one of the video interview at the end).

I laughed louder than I’ve ever laughed in my entire life, and bellowed “AND THERE ARE MORE SURPRISES COMING,” at the approximate volume of an old person ordering from a drive-thru. More. Surprises. Coming. What did it mean? He didn’t know. The publicists didn’t know. I didn’t know. Just a torrent of words, bursting through my toothy dam. My six minutes with Quentin Tarantino – auteur, legend, Newsroom fanatic – was just seconds old, and already it was ruined.

An hour earlier I had skulked into the foyer of the Skycity Grand Hotel, tightly grasping one shaky piece of paper, my insides made up of a thousand deadly vipers. A friendly person wearing a denim apron asked if I wanted a tea or coffee. “No thank you, my head will explode!!!!” I laughed maniacally, sending all natural decorum right down the toilet and upsetting some sandal-wearing Americans nearby.

This wasn’t real life anymore, this was a day where I could say anything to anyone. Quentin Tarantino included. There were free pastries everywhere, but my tongue already felt as dry as a corn husk doll. I sat drinking water from a cooler that had weird spiritual ribbons of cucumber through it. Nothing. Drier even, somehow.

I was put in an elevator and sent up 20 floors. Another place to sit, two chair options this time. One was a squishy lounger right by a window that would leave my body angled obtuse, open and relaxed. The other was rock hard and formal, and would force me into a vice-like acute angle, right next to the Hallway of Tarantino Truth. I chose the squishy chair, but quickly realised it was far too casual for the occasion. In a weird half-prone position, I felt my brain actively trying to induce a coma to get out of the situation. It didn’t help that there were also actual celebs milling around me. Jeremy Wells. Dom Bowden. Matt Heath. I changed to the formal chair.

“I’ll warn you, he’s sitting really far away,” someone said post-interview as they waited for the elevator back down to Earth. I wasn’t prepared for any kind of voice projection, and urgently started chanting “red lorry, yellow lorry” with Flicks editor Steve Newall. I kept saying “lolly” instead of lorry. I was absolutely fucked.

Meanwhile, a Japanese couple wrestled their baby into a pram outside their room nearby. I wondered if they knew what was going on just a few doors down, and wished momentarily to be that baby, all wrapped up in a blanket, unburdened by any looming six-minute interviews. I thought about the hilarious episode of The Unbreakable Kimmy Schmidt where Titus says on live TV “I wanna start over… I wanna be a baby.” I had never related to that feeling more in my life.

I had questions, sure. I had whittled them down slowly over the past few days, trying to find an angle that didn’t include the n-word, violence or anything that would prompt Tarantino to want to “shut my butt down”. As I re-read my questions, printed hastily at a City Convenience where I accidentally also picked up half of somebody’s CV, I started to doubt everything I had ever known. What if he doesn’t want to talk about his female characters at all? What if he is feeling stroppy? Will he be able to smell it on me that I fell asleep during my first viewing of Jackie Brown?

“This feels like a job interview,” said Siena Yates of Fairfax, who had now joined me on the formal pew. I felt the same, like somehow I was going to flub a question and not pass the test I had made up in my head to become Quentin Tarantino’s new best mate. I wasn’t intending to become his muse or anything, but I’d be lying if the thought hadn’t crossed my mind. I’ve been to Waiheke, and I was once a part of a stunt demonstration with Mark Vette where a big dog pushed me over. I’m practically the same as Zoe Bell.

From my ‘job interview’ chair I was led down a hall to another chair, more of a ‘death row’ kind of chair. This was my own valley of darkness. There was another table covered in pastries, sliced-up fruit (what kind of monster would hoe into a big sinewy piece of pineapple at a time like this?), and a large bowl of Skittles. I picked a few Skittles up and popped them in mouth. Dammit. Bloody M&Ms. I know nothing about anything, can’t even correctly identify a red lolly (yellow lolly) and am about to interview one of the most famous movie directors on the planet. “You’re up,” someone said, her face melting away like wax as my perception of time and space immediately warped, Dali-style.

I was led towards the light – and there was A LOT of light – with Quentin sitting in the midst of it like a Muppety messiah. It was then that he first realised I was a female version of an Alex, and I yelled back that there was a non-existent surprise on the way. I had entered the ‘banter’ arena, armed only with hundreds of weird vague promises and a frightening soundboard of bad loud laughs.

I attempted to recover from the shame vortex while the camera people were fiddling around. This gave me some crucial extra seconds to try and build rapport. I had planned a charming anecdote about how I once fell over at a bar dressed like Mia Wallace whilst drunkenly trying to do the dance from Death Proof. I opened my mouth to tell the great story, but my Neanderthal brain had already latched onto the bag of Pineapple Lumps at his feet. Move over, good rapport-building story, we have some Kiwi Pride to uphold. “I SEE YOU’VE GOT YA PINEAPPLE LUMPS THERE” I barked, still struggling to modulate my volume. “YOU SHOULD PUT THOSE IN THE FREEZER, IT’S OUR ONE NATIONAL SECRET.” Our one national secret??? Maybe I could just pretend to have been sleeptalking the whole time? It’s too late, it’s all too late.

After that confusing piece of NZ trivia, I got the start signal from a woman in my eyeline and realised there was no time to do a hard sell on the sleeptalking angle. I looked down at my questions that prompted me with “(say a blethery hello and congratulations thing)” – a note that I thought was funny at the time but now hated every inch of myself for writing. “HELLO,” I said, “congratulations,” I said, finally finding an appropriate decibel register for the room. The hard part was out of the way, and I launched into my questions about the women of Tarantino. This is what he had to say: