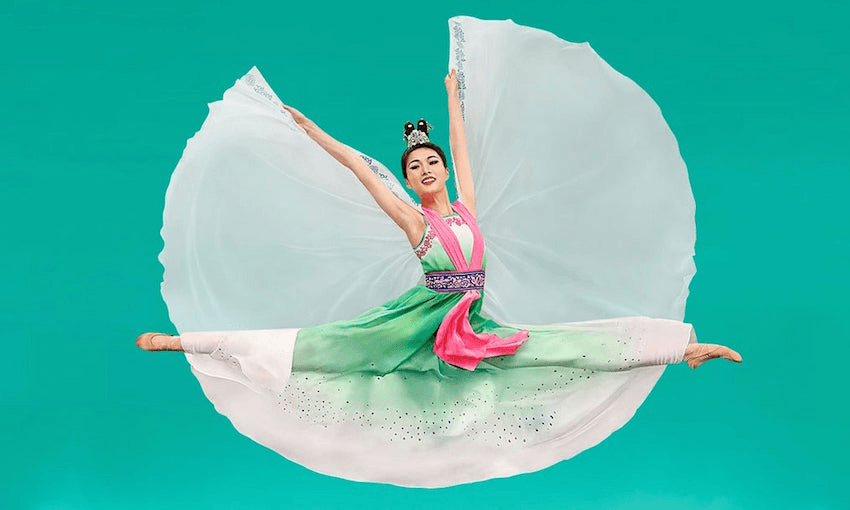 What is Shen Yun and why do I keep seeing those ads everywhere?

‘A life-changing experience’, ‘The greatest of the great! It must be experienced!’, ‘That show with the dancing lady on the billboard.’ Shen Yun ads are impossible to avoid, but what on earth is it?

So what is Shen Yun?

According to the Shen Yun website: “It is a brilliant artistic revival and celebration of China’s rich cultural heritage … Each performance consists of about 20 pieces, quickly moving from one legend, region or dynasty to the next.”

According to the brochure, and many billboards that criss-cross the city, it is “5,000 years of civilization reborn”.

The actual Shen Yun Performing Arts Company was founded in New York in 2006, and is strongly associated with the Falun Gong (sometimes called Falun Dafa), a relatively new religious movement from China. There are seven touring companies, comprised of hundreds of performers (both musicians and dancers), who tour 130 cities a year annually. Their first performances in New Zealand took place in 2008. It’s one of the largest, most comprehensive touring shows in the world, rivalling the ubiquity of Cirque du Soleil.

But what is it?

The Falun Gong is a religious movement, founded in 1992 by Li Hongzhi, who remains its spiritual leader. Its practice combines meditation, exercises in the qigong martial art and teachings drawn from Taoist traditions. In an interview with Time Magazine, Li said Falun Gong adherents have the power to levitate, warns of a potential alien invasion and refuses to confirm if he’s human or not.

By the end of the 90s, Falun Gong numbered nearly 70 million practitioners in China and the Communist Party viewed it as a threat. After more than 10,000 adherents staged a protest, the Communist Party cracked down, blocking internet access to sites that mention Falun Gong, and declaring it a “heretical organisation that threatened social stability”.

But how does that relate to Shen Yun?

The company was established back in 2006 as a way for Li to change the world through the power of dance. When he spoke at the 2014 New York Fa Conference, he spoke of a few disciples involved in the arts who wanted to use art to change the world. After seeing them do their art thing, he found them mediocre and then decided that if dance was going to save the world, it needed to be top-notch. And thus, Shen Yun was born out of the Falun Gong.

Shen Yun is, unsurprisingly, banned in China. Chinese embassies across the world warn the public to stay away from a show they call “a tool of the cult and anti-China propaganda”.

On the back of their print brochure, the company states: “Traditional Chinese culture – with its deep spiritual roots and profound worldview – was displaced by Communism in China. While Shen Yun cannot perform in mainland China today, we are reviving this precious heritage and sharing it with the world.”

Despite the connection between Falun Gong and Shen Yun being very clear, it is downplayed in all the marketing material, being mentioned only once on their website and nowhere in their print material.

Shen Yun caused a bit of a stir here back in 2013, when the Dominion Post reported that Wellington mayors and MPs had been invited to see the music show, with most saying they were unavailable that night. (It’s worth noting, maybe, that mayors and MPs being unavailable to attend a theatre or dance show is not in itself newsworthy. Ask any theatre producer, especially those with considerably less saturation than Shen Yun.)

Back in 2011, it caused a small amount of controversy in Auckland when the Chinese Consul General Liao Juhua sent Auckland council members a letter “kindly requesting” that they stay away from the performance. That news story was published by the Epoch Times, an international newspaper that is run by… the Falun Gong. The show’s producers claim that the Chinese state attempts to interfere with the show around the world.

If this show has been performed for more than ten years here, how come I am only hearing about it now?

Since its first appearance here in 2008, the company has heralded its upcoming performances with billboards, half-page ads in newspapers and primetime television ads. This year they appear to have ratcheted up the ad spend dramatically. There’s been a mail drop campaign featuring full-colour, double-sided, fold-out brochures that do not come cheap, and it’s very likely you’re seeing the show pop up all over your social media feeds. I guess they can afford it, though. According to Insider, the organisation made $22.5 million in 2016.

There’s also been increased scrutiny and coverage of the production in the past few years, including Jia Tolentino’s definitive piece in the New Yorker, and a popular meme last year which featured the ubiquitous Shen Yun dancer and billboard in places like Mars, the Blade Runner universe, and the titular billboards from Three Billboards Outside Ebbing, Missouri.

How do they afford this?

There’s the rub. In each of the 130 cities that Shen Yun visits yearly, the shows are “presented” (read: funded) by the local Falun Gong association, as reported in this excellent Guardian article. The followers in each city raise the necessary funds and provide the publicity to make the show successful. In return, the volunteers get a few tickets to the show. So all those ads, all that marketing, all those direct-to-recycling brochures? Yup, they’re probably funded by the same people you see exercising in Aotea Square on a Saturday morning, and handing out fliers about persecution.

It appears that marketing works. Despite tickets to the show costing anywhere from $112 to $269 for its 2020 Auckland season, at least one of those shows is close to selling out as of this writing, and the show as a whole, ostensbily at least, makes enough money to tour seven companies around the world seemingly constantly.

But is it any good?

I haven’t seen it, but it probably depends on your tolerance for dance and propaganda, which as far as I’m concerned is a cursed peanut butter and chocolate kind of a mixture.

You can see Shen Yun from February 27 – March 1 at the Kiri Te Kanawa Theatre, Aotea Centre.