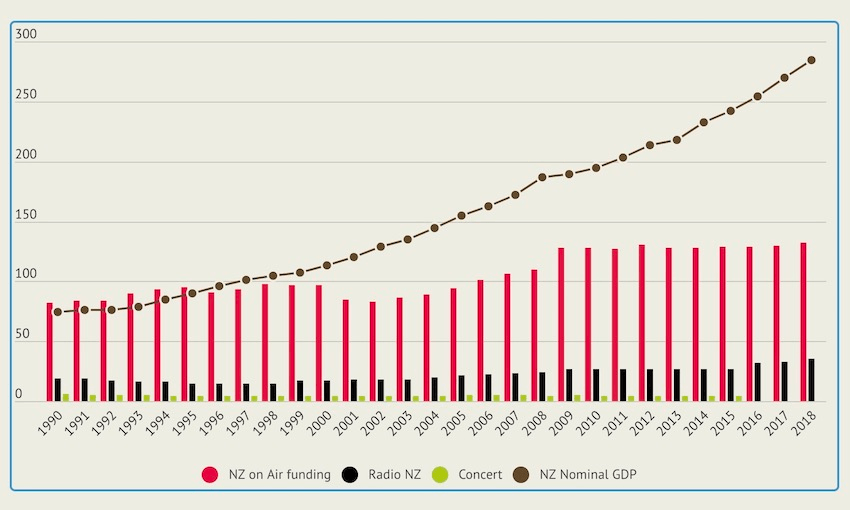 While researching NZ on Air for a recent history, Duncan Greive noticed a shocking 30 year trend.

News broke over the weekend that Love Island NZ, Three’s biggest announcement of the year, will now not screen in 2019, and realistically is unlikely to be made at all now. The fall of a much-discussed, much-critiqued reality TV show will likely not be of huge interest to politicians or those tasked with aiding and abetting New Zealand culture. But maybe it should.

Because the fate of Love Island – and its commissioner, Andrew Szusterman, whose resignation was announced this morning – is a parable for the state of New Zealand’s media. The business has gone from immensely successful – “the only thing more profitable than newspapers was heroin trafficking”, ex-Herald editor Gavin Ellis told me a few years ago – to an entirely marginal proposition.

Let’s survey the scene. Stuff, the website and a collection of newspapers and digital brands, was sold to Australia’s Channel 9 as an unwanted part of a package to acquire an Australian real estate site, and failed to find any serious buyers when the market was tested in March. NZME, owner of the Herald and some of our most prized radio stations, has a market value roughly commensurate to its debt. MediaWorks, owner of Three, Bravo and half the commercial radio industry, has been for sale for over five years. And Sky, once one of the 10 most valuable companies in the country, is now worth less than a fifth what it was a few short years ago.

The story of how this once mighty industry fell to its knees is familiar to the point of tedium. Facebook, Google, TradeMe, the internet in general… You know it well. But what it less well-known is the extent to which governmental support for the media has fallen away. The chart below sets the funding for three state media institutions against New Zealand GDP – the size of its economy.

In theory, you would expect the lines to rise in lockstep. As our population and productivity rises, so does our ability to create public media which ties us together, communicates important information and reflects our society and culture. In fact, you might expect it to have outpaced GDP growth over the past 15 years, as demographic behaviour and technological change has effectively created a third medium – digital – in need of content.

So let’s see what the relationship between funding and GDP (a measure of an economy’s size) has looked like over the 30 years since NZ on Air was born.

The chart shows that public media funding has in fact hugely lagged GDP growth. The vertical axis is in millions for the NZ on Air and Radio New Zealand, and billions for the overall economy. As you can see, when NZ on Air was born in 1990, it received $82m, while the New Zealand economy generated $74.6b. Thirty years later, NZ on Air received $132.3m, while the New Zealand economy generated $284.4b. Which is to say that NZ on Air’s budget has grown by 61%, while the economy is 281% larger. Radio NZ – which I’ve shown separately on the graph, but comes out of the NZ on Air budget – has had a similarly halting progress.

Another way of assessing the gap is to test New Zealand against other similar nations. This is what Canada’s CBC did in 2014, when it released a study showing how badly-funded Canadian media was. Only, our funding was considerably worse.

RNZ put the number last year closer to $50 – but it still lagged the $67 Australians spend, and, as the chart shows, they’re hardly a paragon of support by international standards.

This funding deficit got considerably worse under the most recent National government, which effectively froze funding for NZ on Air, but the trend was already in place. Which is to say that when times are good, they’re not as good for public media. When they’re bad, they’re worse for public media.

This government promised to be different. It campaigned on a massive increase in funding, creating a new channel or returning TVNZ 1 to its commercial free glory days. Yet so far, it has delivered very little.

During the media’s ’90s and ’00s peak, this was of largely academic interest. In 2019, with all our major private media companies dealing with radically different fiscal realities, it’s no stretch to say that a substantive change to policy could be life and death for some of our largest and most important media companies.

Note: Te Mangai Pāho was founded in 1993, and separated from NZ on Air in 2000 after abolition of the broadcasting fee, and in FY2018 it received $58m in funding. Yet given that TMP’s funding is an obligation under Te Tiriti o Waitangi, with a very different set of goals to NZ on Air, there’s a strong argument that it should not be considered as part of the overall public media funding matrix. At the very least, given that Māori broadcasting received around $500,000 in the first NZ on Air budget, the decline in funding for non-Māori public media holds.