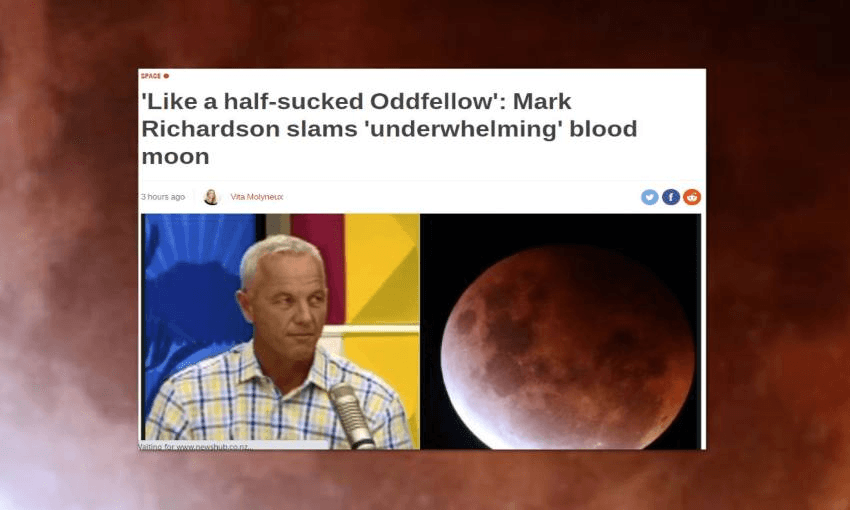 Blood Moon hits back after being slammed by Mark Richardson

By Blood Moon
Guest writer
Made possible by

Much of the southern hemisphere has come to a standstill to stare in amazement at the AM Show slamming the Blood Moon. Here the Blood Moon speaks out.

I can’t pretend it doesn’t hurt. Flicking between the channels this morning after an arduous night being the Blood Moon, I happened upon the AM Show. There was Dr Ian Griffin in a charming hat. He’d been looking at me. I had been “really high in the sky”, he said. Thank you, Dr Griffin! I was “really beautiful”, he said. Stop it!

But then I was slammed back down to earth. Slammed by Mark Richardson. I was “pretty underwhelming”, he said. Continuing to slam, Mr Richardson said I was “like a half-sucked Oddfellow in the sky”.

Don’t get me wrong. I understand the slam economy. It can’t be easy getting out of bed every morning and finding another thing to slam. But when you’re on the receiving end it burns, especially if you really love The Block.

You might gaze at me in my ethereal splendour, you might observe the outpourings of astonishment and awe at a lunar eclipse arriving at totality, bloodied amid the star clouds of Scorpius, luminous, incandescent, transcendent, and think I’m indestructible. But I’ll tell you this for free: even a Blood Moon feels bad when slammed.

Fortunately I’ve had several supportive texts and emails. One example: “Appalled by the slamming of you, Blood Moon. Pretty rich of Mr Richardson and Mr Garner to call you a half-sucked Oddfellow in the sky when they look like disappointing samosas you peel out of the back cavity of your freezer.”

I suppose what I would say to Mr Richardson is that you may be a former test cricketer, the host of a beloved home renovation television programme and a leading New Zealand slammer. But I am the Blood Moon.

The reporting of my slamming upset me a bit, too. Mr Garner is described as also slamming a “sort of an orangey thing going across the moon”. Fine. He also said “it was brilliant”, however, and “the stuff around the moon looked cool”. And he wore a rusty brown jacket in solidarity. You didn’t see that reported by Newshub. I’d love to see Mediawatch pick up on this sort of selective coverage, but no doubt they’ll instead just be doing another programme on Mike Hosking.

I was mostly disappointed in Amanda Gillies. She always seemed like the good one. She didn’t bother getting out of bed to look at the sky but still slammed the Super Moon (me) as “a little underwhelming”, “rather underwhelming” and “underwhelming”.

The Blood Moon was speaking to Toby Manhire