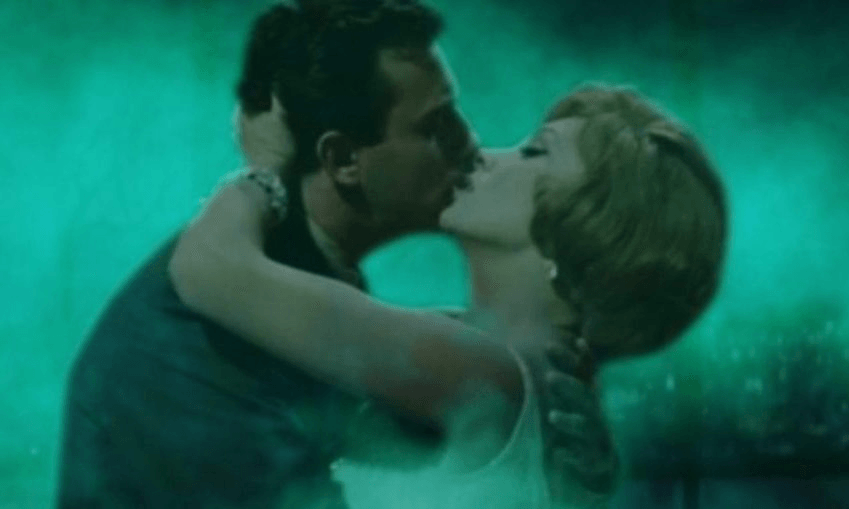 It will be bizarre and you may hate it: Guy Maddin’s The Green Fog

It will be bizarre and you may hate it: Guy Maddin’s The Green Fog

The NZ Film Festival opens in Auckland on July 19, a week later in Wellington, and then through the country. David Larsen and a team of obsessive cinephiles will be filing capsule reviews for the Spinoff once we’re under way. But first, David offers his advice on navigating the programme

A few years ago my teenage children came up with the idea of doing the film festival blind. The method works best if you have access to a festival maximalist, one of those happy souls/insane obsessives who fill the 17 days of the main programme with as many films as their need to earn a living will permit. You tell this person which days and times you wish to join them for a film, and ask them to grab you a ticket to whatever they’re seeing then. They are forbidden to tell you what you’ll be seeing. You find out when the titles roll.

It’s only a rough count, but I make the total number of things you can buy a ticket for at this year’s NZ International Film Festival something close to 170. That includes new-release films, classic films, themed programmes of film shorts, and, for Aucklanders, the traditional evening of silent-film-with-live-orchestra. There is no perfect way to navigate this many options, if by “perfect” you mean a method that will net you all the things you’ll enjoy, none of the things you won’t, and arrange them so they fit neatly into your life. My children report that the semi-random blind programming approach is a good one. If you happen to be an insane festival obsessive, this news is at first maddening, and then curiously relaxing.

A few of points to consider, while constructing your imperfect personal schedule: first, NZIFF is that rare beast, an arts organisation with a well constructed website. Their visual schedule guide is particularly useful, especially if you use it with the wishlist feature. Work out when you’re free to go to films, see at a glance what’s playing then and how long the films run, save your selections to your wishlist, and then tweak it at your leisure. (I spend hours doing this every year. It’s become something of a seasonal hobby.)

Second, films are colour-coded in the schedule by programme section, and the sections provide a lot of cut-through for anyone looking to simplify their selection process. There are 13 sections of vastly different sizes and with highly specific catchments, from general documentary and international dramas all the way down through family film to this year’s new zeitgeist mini-section News/Fake News. If you can only go to a handful of films and you want variety, high quality and a sense of where the international cinephile conversation is focused at the moment, the Big Nights section has everything you need. Fresh has historically been my most productive section; they’ve tweaked it this year so that instead of featuring only directors on their first or second features, it’s now devoted to “the films that held our attention with their energy and originality.” (To which they add, “Not every film that feels like a harbinger of the future is the work of a young filmmaker – though an encouraging number on the pages that follow are.” My initial response to this was “Aaarghh WTF why change what works?” Then I noticed that one of these future-harbinger films is by Canadian madman genius auteur Guy Maddin, aka The God Of Strange. He’s in his 60s, but, yeah, a section devoted to startling new cinema is definitely where I’d put him.)

Third, this is the festival’s 50th anniversary, and the programme features 12 films with a little “50” symbol next to their title. These are selections brought back from the past five decades to make up a repertory mini-festival. You don’t get that many chances to see classic films in good prints on big screens; I’m hoping to make it to all of them.

Oh, specific film recommendations? Gah. Impossible. Because one, too many choices, and two, the best films are not the ones I already know I want to see, they’re the unlikely ones I take a chance on. This turns out to be true every year. But if you want the five films currently topping my list, they’re the Guy Maddin one (The Green Fog; it will be bizarre and you may hate it), Cold Water (one of those 50th anniversary classics; semi-autobiographical coming of age story from the great Olivier Assayas), Cold War (I’ve taken care to avoid knowing too much about this, but it’s from Pawel Pawlikowski, who made Ida, one of the most powerful films I’ve seen this last decade), Capharnaüm (social-realist drama from Nadine Labaki, a Lebanese film maker who hasn’t previously had the recognition she deserves; but this one exploded at Cannes), and Virus Tropical (animated film based on an autobiographical Columbian graphic novel; I know almost nothing about it, but somehow it just has me excited).

Four people will be joining me to blog the festival for your convenience. In Auckland we have Aquila, who describes her film selection focus as “women directors, widest possible range of countries, indigenous voices, lesbian film, and apparently this year films from Iceland”; Jacob Powell, who goes in looking for “strange films, anything Russian, things I can take my children to, twisted psychodrama, something deadpan”; and Doug Dillaman, whose schedule “is generally divided between the esoteric arthouse and the dubious grindhouse, with a dollop of observational documentary, a spoonful of retrospectives, and a dash of giant-screen event screenings at the Civic”. (Doug has a seven-tier NZIFF prioritisation system, which he will share with you if you’re unwise enough to ask.)

And in Wellington, where things start one week later but the theatres are much closer together, we have me, and we have Pip Adam. “My first and perhaps fondest NZIFF memory is stumbling into a festival screening of Drowning by Numbers in about 1988 on my day off,” she says. “As well as Chinese, Korean and slow-moving films where nothing much happens, I love Point Break and anything with Dwyane Johnson in it. My favourite thing to do in film festival season is pick films randomly while I still know as little as possible about them, in the hope I’ll stumble on something that makes as big an impact as Peter Greenaway did all those years ago. I will probably just tell David to pick things for me this year. His children claim this works.”