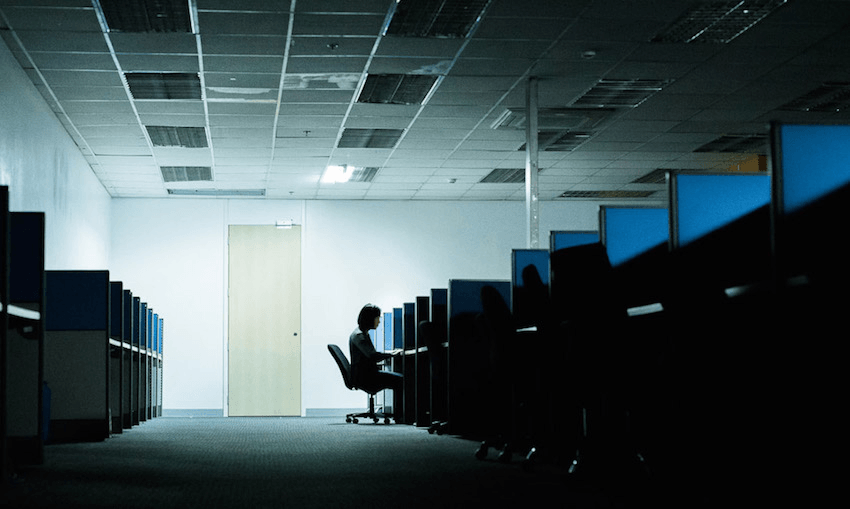 The fifth installment from our team film critics swarming the cinemas of Auckland and Wellington for the 2018 NZ International Film Festival.

In the Aisles, The Image Book, Apostasy, Brimstone and Glory

I’ve written a note. It says, ‘Pip, in a few hours you will have rationalised it, decided it was overblown for narrative effect, but please remember – you were horrified.’ It’s been a few hours now and I’ve convinced myself I overreacted, or at least I’m trying to. I’m pretty convincing, but I still haven’t been on social media.

Hans Block and Moritz Riesewieck’s The Cleaners centres on interviews with five content moderators working and living in Manila. The moderators work for a company contracted by social media platforms to check the material their ‘community’ posts online meets their ‘guidelines’. The interviews take place at night in an office block. The moderators are speaking anonymously and at risk. This gives rise to beautiful shots of faces illuminated by screens. I couldn’t help wondering if such a disturbing film needed to look this good. There’s a hypnotizing, animated info-metric the film returns to which seems to mean everything and at the same time nothing. But, all this beauty seems to say something about the power of the image and the film has great control of the varying ‘hews’ it uses to differentiate the streams of the narrative. The moderators talk in the dark, while Facebook and YouTube ex-employees wring their hands in bright white light. The film offers no solutions but presents its problems with thought. It makes intelligent decisions around how much of the disturbing images to show. There’s enough to make it clear where the stakes are but as well as being a film about censorship and protection, The Cleaners is a film about freedom of information. This film drives home the fact that we’ve put commercial interests in charge of both tasks without really deciding to.

It’s hard to write about The Cleaners without sounding like any number of things I’ve read and heard before. We scroll past so much of what’s at its core every minute of every day – Facebook is evil, there’s no algorithm for censorship, engineers are not ethicists. It’s hard to explain the way the film shook me awake to things, I now realise, I knew but hadn’t acknowledged. The footage of Manila is a wake-up call in itself. I knew it was this bad. The Cleaners has made me realise it’s really this bad. / Pip Adam

Chela and Chiquita have been together for 30 years. Chiquita has always taken care of the house, the money, their social engagements. When she is sent to prison for debts run up keeping them in the upper class Paraguayan style they grew up with, Chela slowly finds herself engaging with the world in ways she hasn’t for years. All this is information that is gradually inferred by the audience in Martinessi’s slow, observational film. Chela doesn’t speak much, and largely just lets things happen to her; we start to deduce her inner longings from the smallest of actions. Angy, the bold younger friend she makes, is certainly quick to do so. There is a wealth of class and generation detail in the dark, quiet house full of heirlooms that are slowly being sold off and I’d be interested in seeing a whole movie set in the chaotic, bustling community of a prison which it is contrasted with – it looks far healthier than our over-controlled institutions. Heiresses won’t be a film for everyone, but it looks deeply at characters and experiences that are rarely seen. / Aquila

Aneesh Chaganty’s Searching won this year’s Sundance Audience Award. You don’t want to know much going into this film but I think this is a useful piece of information. I’m sure it’s great watching Searching by yourself but I loved watching this film with friends in a cinema. I’ve seen it twice now and both times the energy that runs through the audience at certain points in the film makes me realise what I miss watching films in a non-cinema setting. There’s also something so odd and mind-bending about seeing the screens we look at all day everyday blown up to cinematic size. I was reminded that screensavers are actually really beautiful. The sounds are also made intriguingly strange through a cinema sound system. The film starts with a dial-up modem; the click of the mouse becomes the pace-keeper of the film. It’s really exciting to sit with the first set of human beings ever to live who can read the language this film is made in.

As well as being an interesting experiment in form – I’m still think about whether the filmmakers controlled the split-second buffering in some of scenes to add tension – Searching is a really satisfying and gripping mystery. There were moments between my two viewings where I wondered if telling the story through computer screens was a gimmick and perhaps the story would have been stronger told in more conventional ways. There’s an argument for this and on the second viewing the computer screen form did seem to slow the film in certain places. Also, after the first watch I was gutted about the places the film seemed to ‘cheat’ on its constraint. However, running alternatives through, I think the content can’t be easily removed from the form, which I guess is always the test. The computer screen does what it does in real life – distracts or perhaps controls where our attention goes so we miss what we need to miss and see what the story needs us to see. I realise I’ve just explained film-making but there is something additional which lies in the language of the computer screen. There’s a major plot-point which I think works because we understand the nature of an image rather than what that image is.

The cast of Searching give outstanding performances in what must have been strange contexts. It wasn’t until my second viewing that I realised how pitch-perfect the performances are so that the end is not only surprising but inevitable. I think a lot about representation of non-white experience in commercial American cinema and Searching seems like a really important type of representation. It’s important to the plot that this is the story of a Korean-American family – this doesn’t feel like colour-blind casting. However, this is not a story solely about being Korean-American.

I had a lot of fun watching Searching. It’s a really entertaining piece of cinema and a beautiful artifact of our moment. / Pip Adam

Holy shitballs! Straddling the line between era-specific ultra-cool (fashion/music/attitude) and batshit insanity, Liquid Sky has dropped out of the hidden recesses of the early 1980s like some kind of neon-coated neural grenade, to obliterate our 21st Century synapses. Russian-Jewish emigré Vladislav (Slava) Tsukerman and his wife Nina V. Kerova seem to have mainlined 1970s Bowie iconography and spewed it out into an audio-visual extravaganza, involving some kind of esoteric alien scouring the NYC night in search of heroin and orgasms (obviously). The extraterrestrial being– experienced only via cheap ‘sciencey’ alien POV colour effects – finds these highs in abundance at the apartment of #fml new wave model Margaret (co-writer Anne Carlisle also doing superb double character/gender duty as snarky fellow model-nemesis Jimmy) and the dubiously talented songstress/drug dealer/freakshow Adrian (honestly, what is up with that headband???)

A number of characters spend the first third of the film on the hunt for some cocaine and I think the reason they don’t find any is that the editor (also Tsukerman) has already snorted the lot. The film cavorts about to a twitchy synth-heavy score with an edit that is as unexpected as the framing and effects work, including an amusingly unusual alien arrival sequence and multiple shots of the Empire State building framed to resemble the many hypodermic needles utilised in the narrative. Throw in Johann (comedic gold from Otto von Wernherr), a lanky German researcher on the trail of the alien, who lacks the ability to read social cues, plus the least appropriate fashion photo shoot you’ll ever encounter, and you’re halfway to a clue about just how deranged (in the most awesome sense) Liquid Sky is. By now, reader, you’ll probably have a sense whether this kind of b-grade-art-strangeness is your bag or not – I laughed and gasped to the point of incredulous, joyous tears – but suffice to say that any self-respecting ‘Incredibly Strange’ devotee would be foolhardy indeed to pass up such a rare opportunity. Let me leave you with a proclamation from committed scientist Johann to Jimmy’s mother Sylvia (who expends an inordinate amount of effort attempting to seduce the oddball researcher): “Duties are more important than shrimps!” I know, right? / Jacob Powell