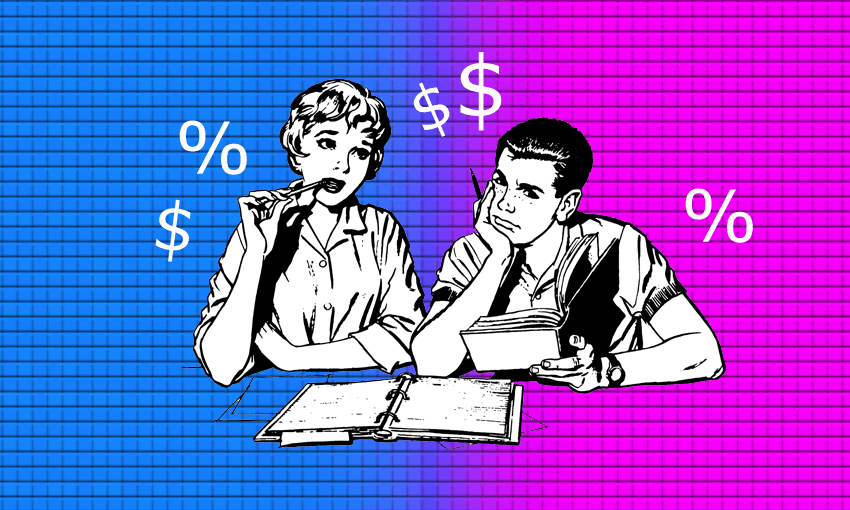 Men score higher on financial knowledge than women, but why?

A new survey from the CFFC has highlighted the gender gap when it comes to financial literacy, with some of the lowest scores among women with children and women over 35. (PLUS: How financially knowledgeable are you?)

While much has been said about the wage gap between men and women in recent years, it isn’t the only gender disparity that exists when it comes to financial matters. Recognising the importance good money decisions can have on a person’s financial wellbeing, the Commission for Financial Capability (CFFC) tested more than 3,000 New Zealanders on their understanding of basic financial concepts and found that in almost every single measure, women had lower financial knowledge than men.

The questions (scroll down to give them a go yourself) tested people’s understanding of concepts such as interest, inflation and risk diversification, with five out of seven being the minimum score for “a financially knowledgeable person”. Overall, 66% of people managed to score at least five, but a closer look shows that 72% of men achieved this target score while 61% of women managed to do the same. Just 22% of participants scored full marks (seven out of seven) but with a 30% rate among men and a 15% rate among women.

Furthermore, women performed worse than men on five of the seven questions with the largest gender gap on questions related to simple and compound interest. The gender gap was also similar across all ethnic groups and persisted across all levels of educational achievement

Dr Ayesha Scott, a senior lecturer in finance at AUT, says she isn’t surprised by the survey’s results, adding that studies have long shown women scoring lower on these sorts of tests than men. She says messaging tends to play a key role in women having less confidence in and around money matters, pointing to the different results that show up when we Google Image search saving (“very ‘green’ with lots of piggy banks) and investing (“very ‘blue’ and quite male-dominated”) as a visual representation of the sort of messaging we receive from a young age around money.

Different viewpoints around money between men and women is also cited by retirement commissioner Jane Wrightson who reckons women often don’t necessarily see money as a means to an end. “Many women have a disconnect between not valuing money per se, and appreciating what money can achieve for them,” says Wrightson. “They rate making money lower than caring for others, yet it’s money that will enable them to look after their children and wider whānau.”

Interestingly enough, in the youngest age bracket (18-34 years), men and women received the same mean score of 4.5. But from ages 35-54 up, a gap starts to appear with men consistently outscoring women. Both men and women’s financial knowledge score increased with age, but women never seem to catch up.

While women in all family situations have a lower mean financial knowledge score than men, the gap is even more pronounced when we compare the mean scores of women with children and women without. The survey suggests this disparity could come down to the time poverty of women due to unpaid caring labour, women’s lower earnings and time out of paid employment. Scott agrees these could be contributing factors, particularly for those in the 35-54 age group.

In fact, knowledge around simple and compound interest is where the gender gap appears most pronounced, with 53% of men answering the questions correctly compared to just 37% of women – a significant difference of 16.5% (it’s also the area where Māori and Pasifika, who are already our most financially vulnerable groups, struggled the most with just 26% and 21% respectively answering the questions correctly).

There’s also a gender gap, albeit slightly smaller, in the 55+ age group. Scott says while many older women are extremely capable of dealing with the operational side of money (ie paying bills and managing the household budget), bigger, long-term financial planning decisions have traditionally been left to the men of the family.

With women already at a disadvantage when saving for retirement due to lower average lifetime earnings and longer average lifespans, good financial decisions made early in life could ameliorate some of this disadvantage. Both Scott and Wrightson agree that not only would this require structural changes (like more financial education in schools) but also better, more open and more regular communication around money, particularly between couples.

“We all know that money can be a real trigger for an argument,” says Scott. “A couple will talk about all sorts of very contentious issues but not talk about money, which is why I’d love to see more work done around how to encourage couples to safely and constructively discuss money without the emotion, the blame and all of the baggage we bring into the conversation.”

She says for families, a healthy relationship for couples around money will also have a flow-on effect for any children in the household, which Scott describes as “socialisation”.

“Anyone who’s been working from home and support their child with online learning knows that actually, the home is a real learning environment for children,” she says. “Financial literacy in schools is only a small part in delivering financial knowledge to an individual.”

Wrightson adds that as well as encouraging more honest and frequent discussions around money at a societal level, we also need to help women connect the dots between behaviour now and outcomes later in life.

“All of us can help the young women in our lives by showing them that knowing how to make money work for you is an essential life skill,” she says. “It will help them become independent, achieve their life goals and take care of those they love.”

How financially knowledgeable are you?

Want to know how you would’ve scored? Here’s a paraphrased version of the test given to the survey’s 3,132 participants. Each question is worth one point and the maximum score you can get is seven. Five out of seven is considered the minimum adults should score according to OECD standards (scroll down for the answers and what each question was designed to measure):

1. Imagine that five brothers are given a gift of $1,000 and share the money equally.
Now imagine that the brothers have to wait for one year to get their share of the $1,000 and inflation stays at 3%. In one year’s time, will they be able to buy:
a. More with their share of the money than they could today
b. The same amount
c. Less than they could buy today

2. You lend $25 to a friend one evening and he gives you $25 back the next day. How much interest has he paid on this loan?

3. Suppose you put $100 into a no-fee savings account with a guaranteed interest rate of 2% per year. You don’t make any further payments into this account and you don’t withdraw any money. How much would be in the account at the end of the first year, once the interest payment is made?

4. And how much would be in the account at the end of five years, remembering there are no fees? Would it be:
a. More than $110
b. Exactly $110
c. Less than $110
d. Impossible to tell from the information given

6. High inflation means that the cost of living is increasing rapidly.
a. True
b. False

7. It is less likely that you will lose all of your money if you save it in more than one place.
a. True
b. False

1. c. Less than they could buy today
This question measures your understanding of time value of money and was answered correctly by 45% of survey participants.

2. Zero
This question measures your understanding of interest paid on a loan and was answered correctly by 95% of survey participants.

3. 102
This question measures your understanding of simple interest and was answered correctly by 74% of survey participants.

5. a. True
This question measures your understanding of risk and return and was answered correctly by 93% of survey participants.

6. a. True
This question measures your understanding of inflation and was answered correctly by 90% of survey participants.

7. a. True
This question measures your understanding of risk diversification and was answered correctly by 65% of survey participants.