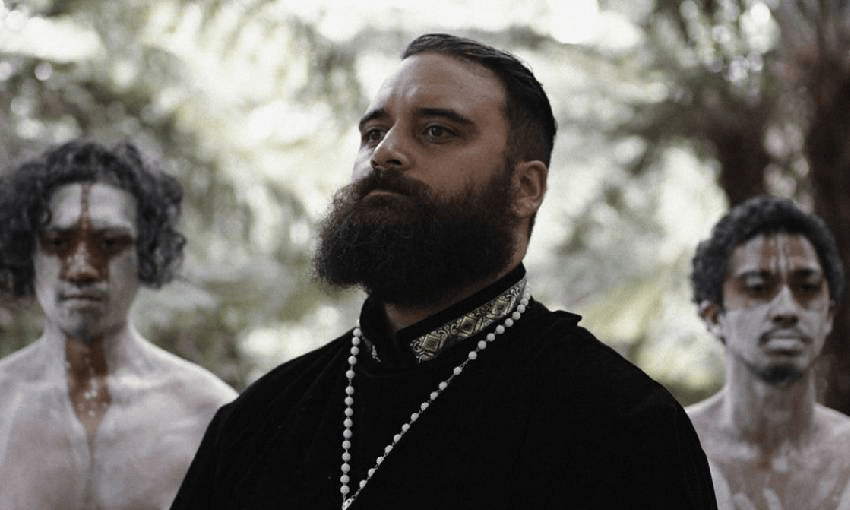 The reign of Troy Kingi

The winner of the Taite Music Prize for 2020 is Troy Kingi, for his reggae album Holy Colony Burning Acres.

Troy Kingi and the Upperclass have won the Taite Music Prize, an award for artistic and creative excellence in New Zealand music. Holy Colony Burning Acres is the third instalment of Kingi’s 10-year plan: 10 albums, in 10 genres, in 10 years. The plan is one of the most creatively ambitious in recent history, so most see the award as very well deserved.

Lockdown may have changed how the prize was delivered, but it was still announced by the right honourable prime minister Jacinda Ardern.

“This year’s recipient of the Taite Music Prize award is an actor and musician who wears a lot of hats,” said Ardern from her office. “He’s acted in roles such as TK in Taika Waititi’s Hunt for the Wilderpeople, and won the APRA Silver Scroll Maioha award for his song with Stan Walker, ‘Aotearoa’.”

“If you haven’t already guessed, I’m pleased to present the 2020 Taite Music Prize to Troy Kingi for his album Holy Colony Burning Acres.”

Kingi spoke to us about the win, the album, and the method behind it all.

The Spinoff: How does it feel to win?

Troy Kingi: I don’t know if it’s sunk in yet. I’m pretty stoked considering the calibre of artists. Super stoked.

It’s a prize for creativity, which aligns with your 10/10/10 goals — is it good to be recognised for that?

Definitely! I know there are artists who are doing well – way better than me commercially – but that’s always been my biggest goal, to create new music that I like, and sometimes that’s not necessarily what everyone else likes! It’s cool to be recognised for something you love.

With a goal of 10 different genres, you must love a lot of music.

Well, I’m coming up to new genres that I don’t know much about. So in saying music that I love, some of it is music that I’ve only just learned to love. Within those genres are artists that I want to emulate, and I’d say the majority of those artists are pre-80s.

Holy Colony Burning Acres is a reggae album. Was that easier or harder than making the psychedelic soul of Zygertron?

I’ve always been one to say that it’s really easy to make any song into a reggae song, but it’s not easy to make a reggae song a good song. I tried to avoid Bob Marley, because he was the king. He’s a genius, and his sound is really recognisable.

So I tried to go more towards The Abyssinians and The Congos – there’s a rawness about it, and I think the way I approach a lot of music is quite raw. We normally take three days max to record the vibe of the album – the drums, guitar and bass. I don’t like too much perfection. I don’t like songs that sound too produced and too clean.

In Bob Marley’s live version of ‘No Woman No Cry’, the PA feeds back at one point. And when I listen to the studio version and I don’t hear that, it’s like something’s missing. Those imperfections are part of the song.

What makes a reggae song?

Musically, it essentially comes back to the drum and the bass. The type of reggae I like is all one-drop, which is more spiritual reggae, where you drop the bass kick on the one. I think the majority of my songs are all the one-drop.

As far as lyrically, all the reggae I love is political. Either about politics or about love.

Is this album the first time you’ve got political with your songwriting?

Yeah, for sure. I was a little bit scared at first, because who was I to be saying that sort of stuff? I had to think about what sort of politics I wanted to talk about, and the only thing I really knew about was being Māori, and the things that affected us. That was my starting point, and then talking to other artists, from other countries – indigenous artists – my songwriting started getting broader, and more global, and so the songs ending up being about indigenous people as a whole and everything we’d endured, because it’s ultimately the same story.

It was hard. If you go back to Zygertron, it was mostly fictional. I could just make up something and sing about it. Whereas this, it’s about lives and stories people had actually gone through. I didn’t want to make mistakes. I had to do some research and go deep on it.

That probably makes you the best person to do it. Do you feel more comfortable writing politically now?

I suppose so. The way I write, it’s not super literal, so I could sneak a lot of political stuff in. I think it’ll be easier [to write politically] in the future, but it won’t be as blatant as Holy Colony.

Ha! No, no way. If I never win another prize again I’ll be stoked I won this one. We don’t do these albums to win awards. If we do, it’s cool to be recognised, but if we never win awards I’m sure it’s not gonna deter us from doing what we want to do, which is to create.