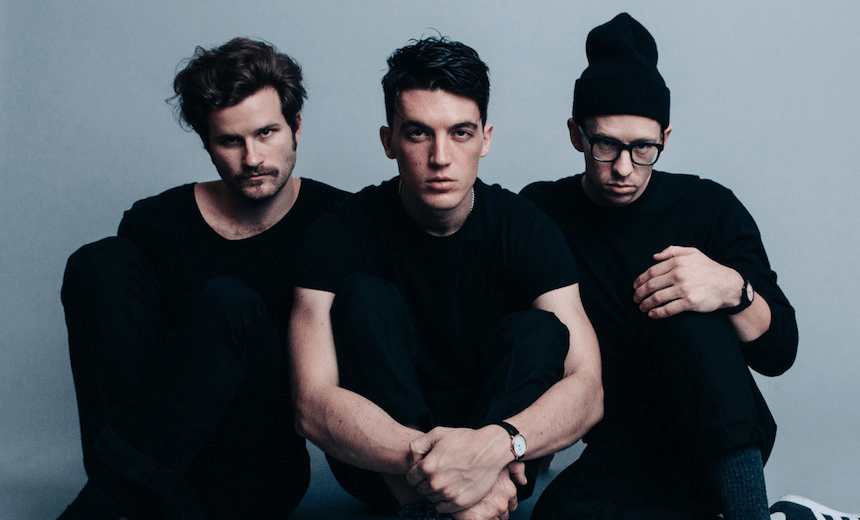 With their debut album just out, Kate Robertson caught up with LANY frontman Paul Klein to find out a little more about the band no one wants to be last to find out about.

A band born out of the internet, LANY are a making hazy, R&B-influenced radio pop that, simply put, is just a goddamn pleasure to listen to. Haven’t heard of them? That’s probably because the band exists almost exclusively online or on a tour bus. They have a tightly managed aesthetic that’s consistent across all of their social media, and which carries through to the music videos and how they present themselves on stage.

It’s a labour-intensive way of doing things, but one that’s paying dividends, and has them headlining at The Powerstation this month – all the proof you could need of their very legitimate so-hot-right-now status.

Going back to the beginning, how did LANY start out?

We all met in Nashville through Belmont University, a music school in Nashville. We were all there at different times, but it’s the common thread between us. Nashville’s still a relatively small city, but four or five years ago it was super small. Everyone does music there so you knew who the drummers were, you knew who played guitar, and you knew who played keys. There were always the great ones, the better ones and the best.

Jake was highly respected in Nashville so when my friend introduced us I was like ‘Hi Jake Goss, I’m Paul, good to meet you’. We became friends, so I’d go to his house to watch sports and just hang out. At that point, Jake lived in a house with Les and three other guys. We were all musicians, but we were all doing music independently of each other.

I moved to Los Angeles on my own and was doing the singer/songwriter thing, but having dismal success. While I was in LA, Jake and Les had started making quirky electronic music on Les’ computer back in Nashville, so I called Jake and asked if I could fly back to Nashville for a few days to write and see what we could come up with.

I came back and in four days we recorded our first two songs and put them on the internet. Across all of our social media platforms we had zero follows, like, none [laughs]. Within six days we were receiving emails from record labels asking ‘who are you?’, ‘where are you?’, ‘what are you?’, and wanting to manage us, it was crazy.

Was that through Soundcloud or across a bunch of different platforms?

Mainly on Soundcloud. We had our band email on there and that’s where most of the messages came from. I had one person in my life who I knew would know if they were real people coming into our lives, and that’s our manager today.

What caught me off guard the first time I heard your music is that it all sounds so effortlessly cool. I imagine a lot of effort went into making it sound that way, but is that kind of vibey pop music just what happened when you guys got together or did you really have to nut it out?

That’s the nicest thing you could say to us, effortlessly cool. It’s kind of a loaded compliment if you wanted to get heavy and theoretical about it.

Why does it feel effortless? Is it because you’re so comfortable with being who you are? Maybe you tried to be something your whole life and it didn’t work, so now you think you’re just going to do what you want, say whatever you want, and if it feels right, it’s going to stick. I think that’s what happened for me with LANY.

I’d come to the end of the road, so with LANY I had total freedom. I didn’t have to pay a producer, I didn’t have to listen to their opinions. I was now in a band with Les who is the engineer and will try anything I ask him, and we’re a team.

From the beginning, it was all about ‘what’s your gut telling you?’ Still to this day we make all of our songs on a Dell computer using a software program called Cubase. We don’t use Logic, we don’t use ProTools.

We’re trying to be the absolute best so there is a lot of effort going into what we’re producing, but it’s also about being so confident and comfortable in who we are, what we feel, and knowing our lane, maybe that’s why it does sound effortless.

People love to stereotype artists making pop music – you’ve got your teenage boy-bands, the huge pop stars, the copycats – do you ever come across that scepticism people have about the genre?

It’s interesting because you know you’re starting to get bigger when people start criticising you and picking you apart, which has been so interesting for me to learn. In the beginning, everyone loved us because very few young people knew we existed. This is me being hyper-aware and basically admitting to you that I remember what people say, but once you start growing people love talking shit about you and the stuff that you make.

I have a really unique way of communicating in that I’m super conversational in my songwriting. I’m not using a bunch big words or deep metaphors and allegories. It’s interesting, the critics really seem to crave ambiguity, but it’s bullshit. I love Frank Ocean to death, but some of his stuff just doesn’t make sense and no one really knows what he’s talking about.

I can guarantee you’ve never listened to a LANY song and wondered what I was talking about. I say what I mean and mean what I say, and I take an enormous amount of pride in communicating pretty complex emotions in a simple and understandable way.

So who’s turning up to your gigs? Because in my head I’m picturing diehard fangirls and fanboys, right through to super cool people in their 20s and 30s?

That is our demographic for sure and it’s an awesome space to live in. I would be really worried if young people didn’t love our music.

How important is interacting with those fans coming to the shows?

Our fans will always come first, and we’re constantly thinking of ways to renew the romance and keep the flame alive. It’s like dating, or maybe even marriage. I’ve never been married but I imagine, how can you keep winning people over and loving people the best?

It sounds kind of antiquated, but we do a newsletter. Now I’m seeing a bunch of new bands doing newsletters too, but I’ve been writing them for our people for years, even just to say ‘hey, there’s a song coming out in three days, this is the thought process behind it, we love you so much and thanks for everything’. I talk to them like I would talk to you or anybody. When I perform on stage I’ll jump out into the crowd and look into their eyes and touch their hands. I fight for that intimacy.

As exhausting as it is, knowing that people sit by our bus until two in the morning just to meet us and take photos, that’s incredibly special. Maybe I’ve got work to do after the show or I want to see a friend I haven’t seen in a long time, but I’ll always muscle it out and take photos outside the bus. Like everything in life it’s about effort, just make an effort.

You’ve been touring almost non-stop since day one, drip feeding songs and EPs along the way, do you think that model for growing a fanbase in a digital age has helped you grow such a passionate group of fans so quickly?

Yeah, the internet is an amazing tool if you use it right, so I’m very conscious of being purposeful in the way we conduct ourselves on the internet.

We’ve definitely worked to establish a culture of positivity, kindness, acceptance, love, and encouragement in the way we speak to people on the internet, and it goes back to making the time and the effort. People tweet at us, and me favouriting that is acknowledgement. That’s what people want, to be heard, to be acknowledged, and to know that we know they exist.

LANY play at The Powerstation on July 26 – you can grab tickets here.