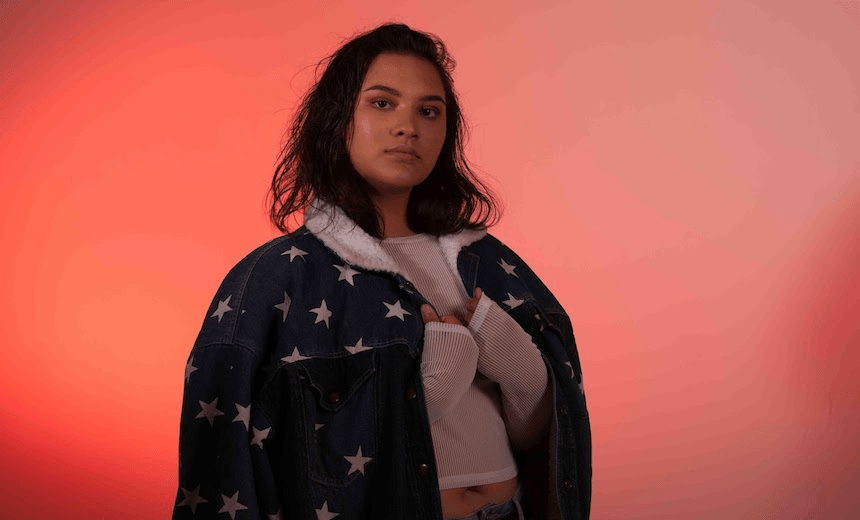 Introducing Tei, the Auckland artist behind the mixtape that’s blowing up on Soundcloud

A classical pianist turned singer and producer, Tei has just released one of the best New Zealand mixtapes in ages. She talks to Alaistar Moghan about the making of OMW.

It’s a familiar narrative. The self-taught bedroom artist watches a few YouTube tutorials, buys some basic kit, uploads a track to SoundCloud and it blows up. But what the PR pitch doesn’t mention is the pre-SoundCloud slog. Tei’s mixtape OMW is no exception.

Over Skype Tei talked me through the origin story of OMW. From the age of five, Tei (Louise Burling to her family) was a classical pianist. Fifteen years later, the daily 8-hour practice commitments necessary to become classical pianist inspired her to find another creative outlet. Here began the road to upload.

Tei started as anyone else would – scrolling through online tutorials and blogs “mucking around on her laptop” until it began to merge with the musical theory and patience learned from her classical training. She first released the mixtape UNO what she now describes as five “really trash” short songs as a proof of concept (I disagree – UNO is worth a forage especially for the smoldering Monochrome which features a killer star turn from slept on Pukekohe rapper Dharmarat).

Trash or not, UNO gathered a crew of like-minded anonymous bedroom-er’s admirers. One such fan was Auckland-based producer Doswami who invited Tei to join the collective T.A.C.tile, a group of Auckland musicians looking to enable their respective creative projects with collaborative inspiration and live players. The two began working together. Out of these sessions came ‘Situation’ and ‘I’m A Soy Chai Latte’, Tei’s personal favourites.

The OMW project was a process of progression rather than planning. It’s definitely and deliberately not an album, she says. An ‘album’ connotations something important, something to industry specs, complete with a release schedule and a tedious artist bio. Tei likens the project to a ‘playlist’ selected from over 50 tracks she wrote, produced and recorded. She sees herself as not only a creator but a curator, cutting and culling until she had “fizzled it down to 11 tracks which merged together really well”.

At 11 tracks it’s a welcome relief. Contemporary commercial imperatives tend to encourage artists to drag out the album to laborious lengths (Drake’s Views and Kehlani’s SweetSexySavage come to mind), but at a concise 28 minutes, OMW feels just right, a slice rather than slab of life. As Tei tells me there’s only so much from life that one can write about – especially “if you are living a monotonous normal life with the same thing over and over again.”

Rather, than playing pretend Tei examines how we try to make our life seem less languid and more “luxe”. Like Lorde, Tei is fascinated with the allure and futility of our social fantasies, yet treads softly. Take ‘Ba$ic’ which admonishes the escapism of social media from the perspective of someone who’s not pretending to be above it. ‘Ba$ic’ was inspired by a scroll through Instagram – seeing friends on social media portraying themselves as “someone who they weren’t in real life”. Coming from a place of concern these friends “suddenly seemed so distant and dishonest”. On the verses she examines how some use social media as a band-aid for our insecurities – “How many snapping filters needed before Adderall, alcohol? How many dollar signs with nothing in the bank you know”. Come chorus time, Tei circles around to snap the story from the user’s perspective – “You don’t think we know? We live in borrowed souls”.

‘Ba$ic’ along with ‘Situation’ were the foundations of the project – the first of the 50 tunes Tei recorded. So it’s perhaps not surprising that ‘Situation’ shimmers in the vain of Tei’s musical crush Tinahse, one of the “three staples” of her musical diet (the other two being Lauren Hill and Jhene Akio). OMW gives you the same introspective feels of Tinashe’s pre-Aquarius mixtape run and this year’s criminally slept on Night Life – which the dependable Gary Suarez put in his Top 10 Electronic Albums of 2016.

An interesting production touch throughout are the surprise Frank Ocean-esque sound bites. These bites are the prize at the bottom of the cereal box. My personal favourite is ‘I’m A Soy Chai Latte’ where mid-song Tei announces “this is my favorite song,” drops a cassette into place and sings along to Rodriguez’s ‘I Think Of You’. It gives the project a homemade feel, a ‘Daniel Johnston effect’. You, the listener, are being acknowledged without pretension. You’re drawn into the story.

The hook in ‘Streetlight’ has me croaking into my iPhone at 2am, probably because it was sung (rather than croaked) into a home recording device in similar circumstances. It’s a cracker – almost self-reflective of its Kanye namesake. “Are you still in my room at night, your presence here might hold me tight, I can’t let go it feels so right, to be haunted, by streetlights”.

But it isn’t all vulnerability and heartbreak; in fact OMW is generally up-vibe and assertive. ‘Dependent’ stakes a flag of confidence firmly in the ground while standout closer ‘I’m a Soy Chai Latte,’ is as playful and bold and it’s title: “He hit me up, yeah he thinks I’m bold / I’m a chai soy latte they don’t make me cold.”

It’s a refreshing confidence. The self-conscious New Zealander in me wants to speak of ‘potential’ and ‘promise’ to mask some ‘Kiwi music’ in superiority complex but OMW isn’t competing. Tei’s on a wave of inspiration rather than aspiration.

When asked about her future intentions, Tei cited a Hot 97 interview with Portland rapper/singer Amine. Amine’s ‘Caroline’ rose to prominence with millions of YouTube and Soundcloud streams which eventually drove it to number 11 on the Billboard Hot 100, becoming a quintessential SoundCloud hit. During the interview, Amine responded to questions on his sudden rise by talking about the importance of self imposed quality control, revealing that ‘Caroline’ was one of 50 other recorded tracks which he didn’t release. He didn’t see his success as calculated or forced but as a by-product of this discretion. “I make songs and hopefully they go the way they go,” he said. “I don’t think anyone plans for a song to … be a hit … but I know what I like so I make what I like.”

As a creative mantra, it’s simple but smart. OMW has tunes and is Tei’s own. Judged against the Amine rationale, Tei isn’t on her way, she’s arrived.