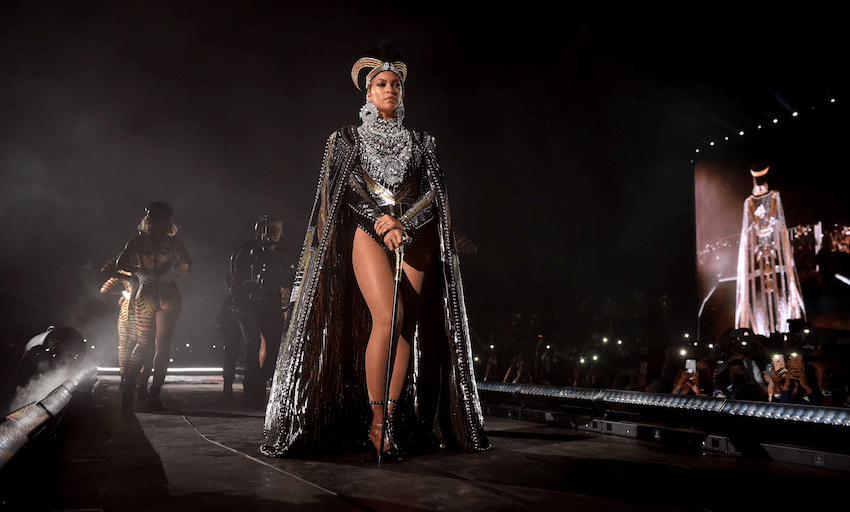 Last night, over wifi, Jogai Bhatt witnessed Beyonce turn one of the whitest functions of the year – Coachella – into a glorious ode to Black artistry.

I’ve started writing this piece around eight times now. I’ve lost sleep over it. I missed breakfast over it. I was nearly late to work over it. And that’s because I haven’t been able to stop thinking about the grand visual experience that was on display last night. There are no words to adequately describe, no words sufficient in this lowly language, to communicate the majesty of what went down.

On April 15, 2018, the greatest living entertainer took the stage for an unparalleled two-hour performance and effectively turned one of the whitest functions of the year into a glorious ode to Black artistry. For reasons unexplained, though most likely divine, I was given the good fortune of bearing witness to it all through the generous filter of my MacBook Air.

I am, of course, referring to Beyonce Giselle Knowles-Carter’s set at Coachella.

“Thank you Coachella for allowing me to be the first black woman to headline,” she told the crowd. “Ain’t that ‘bout a bitch?” This historic feat was not to go unnoticed. Opening with a regal walk to the stage in Nefertiti-inspired attire and featuring arrangements from HBCU marching bands, her team orchestrated a celebration of the culture that we all owe so much to. A performance for Black people, by Black people, but one to be acknowledged by all.

Incorporating historically Black college tradition, sampling Malcolm X quotes, performing homages to Nina Simone and Fela Kuti, to singing ‘Lift Every Voice and Sing’, otherwise known as The Black National Anthem, Beyoncé crossed every genre of Black musical excellence in a performance so immersive I could barely break away (except to tweet). DJ Wally Sparks of Atlanta processed so many more references that went completely over my head.

She also did Go-Go and second line brass band versions of her songs.

And, paid homage to Fela Kuti and DJ Screw.

Our queen didn’t limit herself to the richness of pre-2000s cultural archive. Beyoncé brought modern culture to the forefront by way of some prominent guest appearances. Hov appeared for a rendition of their B’Day hit ‘Deja Vu’, Solange ran on stage for a sisterly dance routine to ‘Get Me Bodied’, and the ethereal demi-goddesses of Destiny’s Child reunited once more, sending me into a momentary daze of euphoric bliss. Oof!

We got a taste of ‘Soldier’ and ‘Say My Name’ and ‘Lose My Breath’. We probably would’ve had ‘Bills Bills Bills’ and ‘Cater 2 U’ if P*st M*lone didn’t occupy more than his allocated stage time. But I digress, because Michelle goddamn crip walked for Jesus, and all my bitter feelings towards the aforementioned melted away.

Since no one is talking about Michelle as per usu I would just like to personally thank her 4 mildly hitting the c walk pic.twitter.com/2nTghRkbbt

A New York Times review described the set as, perhaps, the most “meaningful, absorbing, forceful and radical” performance to come from an American musician this year, and there likely won’t be one to surpass it. From lively arrangements to fragmented references, and deconstructions of her own hits, Beyoncé’s Coachella set redefined innovation to bring live and virtual audiences an indelible experience, weaving a musical tapestry rich with history, politics, and visual grandeur.

How. in. The. Fuh. Did. She. Pull. That. Shiii. OFF!!!!??? It’s like 170 musicians onstage. I mean the stage plotting. The patch chords. How many monitor boards were used??! Bandleading that shit woulda gave me anxiety. Hats off man. Jesus H Christ.

The general sentiment for those viewing the live stream last night was an overwhelming sense of, this shouldn’t be free. I can’t believe this is free, because having something so immersive and monumental and history-defining at the tip of your fingers doesn’t feel like something any of us deserve. But last night, it was, in all its considered glory. And for that, we thank our generous queen. I know I’ll be thinking about this for a very, very long time.