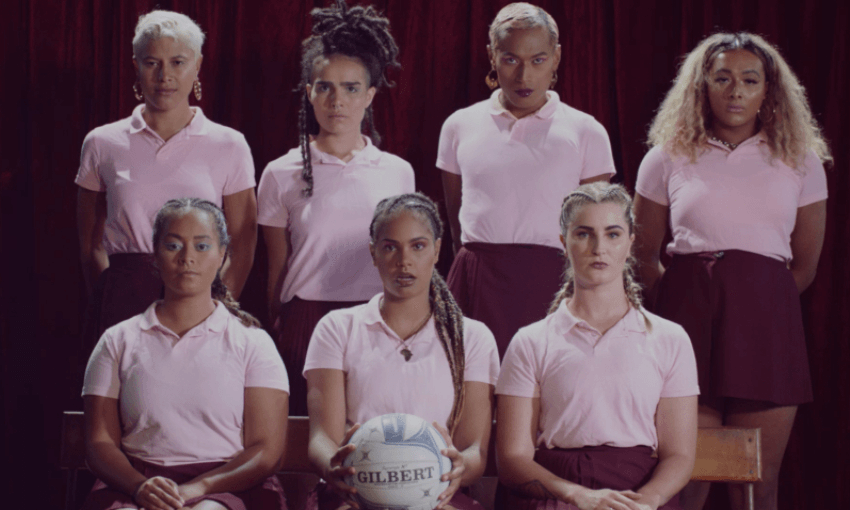 All the best cameos in JessB’s incredible new music video

Everyone loves a cameo, and JessB has them all for you in her new music video for ‘Set It Off’.

Has there ever been a bad cameo? Cameo creme – good. Cameo necklace – a classic. Cameo, singers of hit song ‘Word Up’ – a treasure. Even Anchorman 2, a hugely disappointing movie, had satisfying cameos. Cameos can’t lose.

Rapper JessB must’ve known this because she packed her latest music video ‘Set It Off’ with cameos to spare. It took a few watches and slow zooms but I, a serious investigator, found them all. In no particular order (a slightly particular order), here they are.

PEOPLE WHO CAN ACTUALLY DANCE

It might seem a given that everyone in a dance video can dance but in this wasteland we call home, nothing is a given. This is a dance video in that people dance, and the people dancing know what they’re doing. Ufitia Sagapolutele, Shaki Wasasala, Sofia Mcintyre, Leah Pao, Kris Fox, Akáshi Fisiinaua make up the ‘home’ netball team who have way more fun than I ever had playing our great national sport. Did I try to do some of their dance moves in the privacy of my own room last night? Yes. Will I ever try them in public? How dare you. Don’t look at me.

Adidas tracksuits are good and, if I have my way, will soon be the official, compulsory uniform of thespinoff.co.nz.

Look, we’ve all been there. In a group chat with the girls before a night out, everyone agrees it’s definitely a “jeans and a nice top and ankle socks” type of party, then you forget and wear your bloody school socks.

There’s nothing worse than unrelatable content. Seeing rappers driving around in their fancy cars and lounging in an infinity pool always takes me out of really engaging with their music video. JessB could’ve done the same thing if she’d put a crisp net on that netball hoop. Instead she left it bare, guaranteeing zero satisfaction for the shooters when they scored and full satisfaction for me in watching #relatable #content

These poor women. All they wanted to do was hate everything about their run and regret waking up early on a freezing Saturday and now they have to see themselves immortalised in an otherwise very cool and very staged music video. If I were that first woman I’d never run again. I’m not that first woman but I’ll never run again anyway. Solidarity and such.

Chlöe Swarbrick what are you doing here? Shouldn’t you be in Wellington, doing parliament things? When was this video shot and were you on taxpayer time? This is an OIA.

I have since seen that this video received NZ On Air funding which means it was probably filmed in 2013. OIA retracted.

Madeleine Sami’s just cool. I don’t know what else to say.

LORD OF THE DANCE

Michael Flatley, eat your heart out. Yes, I know who Michael Flatley is and if you don’t, you should frankly be ashamed. A Lord of the Dance VHS existed in every home in New Zealand pre-2000 and that is a scientific fact.

Nothing takes me back to school like holding my breath while pulling on a sweaty indoor netball bib the one time a year I agree to fill in for someone’s work team. No matter where in New Zealand you are, if the bib is that soft cotton it’ll smell exactly the same: like BO and unrequited love.

Suzanne Paul! What’s Suzanne Paul been up to lately? She was in this video, which was a pleasant reminder that she exists and is still cool.

Vans are the best mode of transport bar none. If you ever want to learn to drive a manual, learn in an old van. The clutch will be generous and you’ll build tone in your weak left arm because the gear stick is on the steering column and almost always jammed. Plus it’s really easy to pay from so high up at the drive-thru. Good to see the trusty family/team van getting the recognition it deserves. Mitsubishi Sportpac all day, baby.