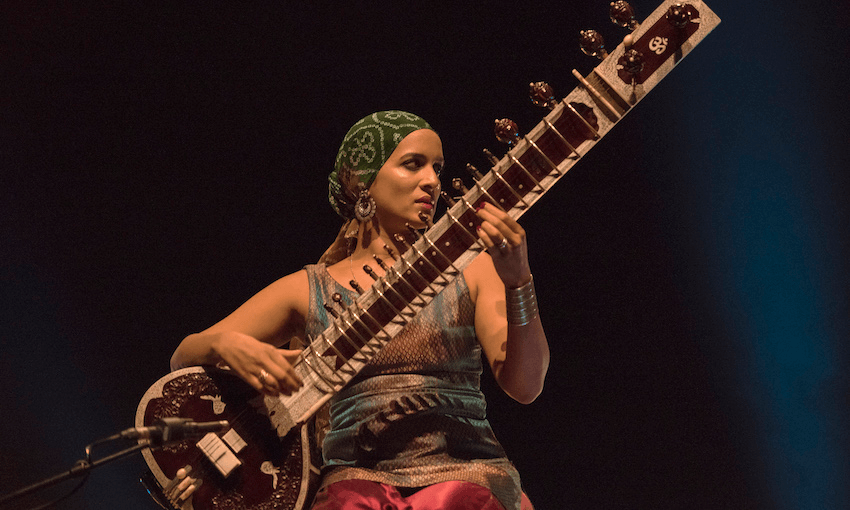 Anoushka Shankar is creating her own feminist voice with her sitar

By Rosie Morrison
Guest writer
Made possible by

Ahead of her performance at WOMAD last weekend, Anoushka Shankar talked to Rosie Morrison about travel tips, the sitar and feminism.

Taking a moment out of the heat and colour and fun of WOMAD last weekend, I made my way up to a quiet shady spot to talk to Indian musician, Anoushka Shankar. She is a powerful presence, an intimidatingly accomplished performer, but at the same time someone who was incredibly kind and warm and genuine in a way that I can imagine some stars lose as they grow in fame. Especially when you’re famous in a country of more than a billion people.

She’s much loved all over the globe thanks to her incredible talent on the sitar, taught in the classical techniques by her legendary father and guru, the late Ravi Shankar. But, she tells me, she’s grown to be ‘very much her own person’ and her music seems to act as a vessel to offer herself to the world. Her back catalogue has introduced her traditional Indian instrument into a diversity of Western genres from electronica to hip-hop and expanded the sitar’s sound far beyond her classical training.

Shankar’s commitment to social justice has covered similarly diverse causes, and that advocacy is something that is strongly present in her music. Her latest album Land of Gold is a direct reaction to the refugee crisis, and she is a vocal advocate for women’s rights. She is an artist that seems to epitomise the inclusivity of WOMAD.

Later that afternoon Shankar would receive the first adoring standing ovation I saw at WOMAD, but before her performance, I got to talk about taking the sitar beyond its traditional understanding and learning about feminism from her mother.

I imagine every concert you play has a different kind of feel and I wonder what WOMAD feels like to you?

There’s a consistency around the world when I play WOMADs. There’s a love of music that precipitates people’s decision to come here, as opposed to, ‘Let’s just go get shitfaced and have a good time somewhere’, do you know what I mean? It’s like people are really here for what’s on offer, so there’s a kind of real community sense of being here to enjoy something, and that sets a template that’s really different from some other festivals where the music just feels really secondary.

I totally get that, and I think that’s amazing you can pick that up even from onstage.

Haha, you get our vibe even from there, I love that. I have to say, it’s my first WOMAD, and I already feel the same, I arrived last night and I’m yet to see anyone being a dick.

Yeah, it’s great right, that’s what you want! And it’s also really family friendly, there’s a high ratio of kids and families which I always think is a really nice sign as well.

So tell me a bit about the sitar, I mean it’s not the most common instrument around…

It was in my family!

Ha, yes true! Do you have a sense you’d like to see it become more mainstream? Or do you like the feeling that it’s a unique instrument not everyone can play?

It’s weird, I don’t really have a said interest in that actually. I do think the sitar has a real potential that could still be unlocked even further and could be less boxed in a particular ‘zone’ than it is currently. So whether that’s about more people playing it, which would be lovely, or whether it’s about the perception in people’s minds you know? But I think there’s a real kind of exotica that can be attached to it which on the last album Land of Gold it was really like ‘how do we strip that away from the instrument, how do we just treat it like an instrument?’ And that was really interesting.

I read that you’ve collaborated with Thievery Corporation who was playing here last night, how does that collaborative role play out for you?

Yeah, I’ve worked with people like Thievery Corporation and I think a lot of the time things come from making friends first. For me at least that friendship chemistry is a pretty good indication that I’ll be able to make music well with people, so even Rodrigo y Gabriela who are playing tomorrow, we were mates for a while first, and then it was like do you want to play on a track you know? And then it’s going to be easy. Generally, that’s a nice way to start.

It’s cool to hear artists supporting and generally befriending each other, real WOMAD vibes right there! So you’re gearing up to play later this afternoon, what does your band look like?

Yeah, we sure are. We’ve got a quartet here, so it’s me and three others. It’s a very crossover ensemble. It’s myself on sitar, Manu Delago on handpan percussion, live drums and electronics, we’ve got an upright bassist pianist, and then a shehnai player which is an amazing Indian wind instrument, and so between us we’re able to go a lot of different sonic directions.

Awesome, I’m looking forward to that. And afterwards, do you get to chill out a bit, enjoy the festival?

Today we do, then we leave early tomorrow. It’s a beast of a week honestly. We’re playing Auckland tomorrow which is great, then we play Macao on Tuesday, Seoul on Thursday, Tennessee on Saturday.

Tell me you get to go home at some point?

I go to my mum’s house where my kids are right now in San Diego and pick them up and chill for a bit. Recover with some mum food and stuff, and then I’ve got a few more shows then I head back to London after that.

While we’re on the subject of mothers, you’re a real voice for feminist rights, and I know your dad has been hugely influential on your life, but I wonder if your feminist heart comes from your mother?

My mum is a fiercely individualistic person who didn’t do things the traditional way, like she really went her own path. So rather than someone who necessarily told me to be a feminist, she modelled really going for her own dreams, and from there both my mum and dad raised me to be a really individualistic person who would speak my mind – and that just kind of led to everything else.

I can imagine your fame, and willingness to speak out at things that don’t sit well with you can bring you a sense of discomfit at some points?

The only time it felt uncomfortable, which I still stand by, was when I did the video for ‘One Billion Rising’ five years ago, having talked about having been abused. I don’t think I’d ever had that experience, and I still haven’t quite to that degree since, of something going viral in that kind of modern social media way. Of how quickly the world can spin around with something, and as much as I deeply wanted to talk about it in the context of that gang rape in Delhi and the fact that we were all talking about sexual violence, I wasn’t prepared for how for the next year of my life how any press I would talk to, would suddenly ask quite intimate, personal questions about something that I hadn’t been used to talking about before. So it felt quite strict. And I learned my way through that, and I think because I did it for a reason I believed in I don’t regret it, but it was a bit raw.

Yeah, I guess there’s no handbook on that, you just have to make your way through it.

Yeah absolutely, I mean now I’m like that’s fine, it’s all part of the process really.

When it comes to that discomfit of getting on stage, you’re such an experienced performer that I can’t imagine you get any nerves.

I feel like you’ve released albums at a crazy pace, one each in 2013 and 2015, and then your latest Land of Gold in 2016. Can we expect to see something new coming out soon?

I feel like I’ve done circuits, like I did about four or five albums quite close, then there was a four-year gap, then another four. Now, I’ve got an idea in my head, but I think by the time it becomes another album it will be another year or two. And this time I really want to work with women, like desperately. Desperately want to work with women.

I just thought why not you know? Like I work with women sometimes but I’m someone who speaks about feminism and representation and then the bulk of my crew and band are male. And they’re wonderful but I also just want to explore an all women crew. I’ve got this idea in my head about what it would be like just to tour with women, play with women, write with women, have one project that’s all women – so that’s the plan.