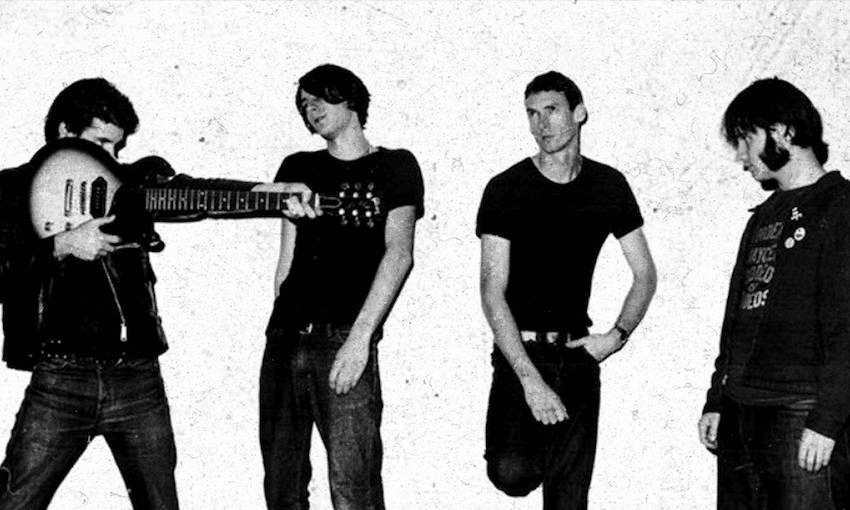 The rise and fall (and rise again) of The D4

Before they called it quits in 2006, The D4 were held up as one of the Kiwi saviours of rock n’ roll. Hussein Moses gets frontman Dion Lunadon on the phone for a candid interview about what went wrong and why now is the right time to get back together.

The D4 are back, but not for long. “I’m treating it as a one-off,” says singer/guitarist Dion Lunadon, over the phone from his home in New York. From next month, the band will reunite for a handful of shows around Auckland City Limits and another at the Kings Arms that’ll mark the closing of the beloved Auckland venue.

Anyone that remembers the garage rock revival of the early-2000s probably laughs a little now considering how seriously everyone took it at the time, but there was a moment when it really felt like The D4 were going to take over the world. It started with their debut record, 6Twenty, which was released locally through Flying Nun in 2001 and roared with exuberance, in large part courtesy of the leather-jacketed Lunadon (née Palmer) and co-frontman Jimmy Christmas (who were joined by Vaughan Williams and Daniel Pooley on bass and drums respectively). Shout-along songs like ‘Party’, ‘Exit To The City’ and ‘Get Loose’ were as raucous as they were loud. Most importantly, they were a whole lot of fun.

Not everyone agreed: Pitchfork wrote the band off as “four lads who play lifeless garage rock about getting drunk, partying, heartbreaking chicks, and living it up all rocker-like.” But those sort of reviews wouldn’t put the band off, or their fans. They played everywhere they could, including tours throughout Japan, Australia, the US and UK. It wasn’t long before they developed a reputation for their chaotic live shows. At one Kings Arms gig, the PA speakers caught fire midway through a guitar solo. At that point, it was nothing out of the ordinary. The band played on.

In 2003, when they performed on The Late Show with David Letterman, they were introduced by guest host Bill Cosby. (Letterman was out at the time with a bout of shingles and Christmas later told Real Groove that Cosby said their songs were too long: “I think he was trying to be funny as all our songs clock in at about three minutes.”) Along with The Datsuns, the D4 were held up as New Zealand’s so-called saviours of rock n’ roll. And then, as these things tend to sometimes go, it was over.

“I kind of wish that we’d taken control of a few aspects a little more,” Lunadon says now. The D4 released a second album, Out Of My Head, in 2005, but it didn’t come together easily. “There were two paths we could’ve taken and I think we should’ve maybe gone down the other path,” he adds. “Rather than making it a little bit more radio friendly or poppy, maybe we should’ve gone down the path of making it rawer and more fucked up. That would’ve been more true to the essence of why Jimmy and I started the band. But we did what we felt was best.”

It was a slow process. After coming off a long tour, the band started working on the album back home in New Zealand, but management and producers knocked it back saying the songs weren’t up to scratch. “We finally ended up moving back to London and making that second record, but it was kind of 18 months or two years of struggle trying to come up with the songs. Even then, I don’t know if it did come out the way I had envisioned it coming out,” says Lunadon.

“A lot of the songs didn’t end up being used for the record – and maybe even songs that I felt like should’ve been used for the record – because they were kind of too garage-y rock n’ roll songs. They wanted hit singles or radio singles or something like that. Whereas that’s not the reason I started the band and it’s not what I was aiming to do. I just wanted to make music that I liked and a lot of the people that we were surrounded by, I feel like they just didn’t get the original vibe of why we started the band in some respects.”

Out Of My Head peaked at no. 17 on the New Zealand charts and it was nominated for Rock Album of the Year at the NZ Music Awards, but lost out to Love Is The New Hate by Shihad. ‘Sake Bomb’ and ‘What I Want’ were released as singles. It wasn’t a failure by any means, but by the time the album had dropped some of the shine had begun to wear off the guitar bands that were in vogue just a few years earlier.

In 2006, the band said enough is enough and called it quits. “It came time to make the third record,” says Lunadon. “We were back in New Zealand. We weren’t really touring too much off the second record, to be honest. It seemed a bit too much of a daunting task to me to make a third record. It didn’t seem like the right thing to do. It just seemed like the best thing for me to do would be to put that to the side and try something different.”

The band didn’t speak much over the years. Lunadon moved to New York, formed a band called True Lovers, and eventually took over on bass for noise-rock outfit A Place To Bury Strangers. Last year he released a grimy album of his own that takes note from bygone local acts like Supercar, Gestalt and Toy Love, as well as proto-punk go-tos like The Stooges and MC5. Meanwhile, Christmas went a little more radio-friendly and released two albums with his own post-D4 act Luger Boa.

“Looking back on it, I have no regrets,” Lunadon says. “It was what it was. I had the time of my life off the back of that first album, so you can’t really regret that. And maybe if it was different, that stuff wouldn’t have happened. It all worked out for the best.”

When the news came out about the Kings Arms closing down, a light went off in Lunadon’s head. He hit up Christmas: “Hey, wouldn’t it be really cool if we played the last show at the Kings Arms?” The band had played their final gig at the venue in 2006. If there was ever going to be a time to get back together, this was going to be it.

Even so, says Lunadon, those days will always be some of the best of his life. “They were very instrumental to me and they were nothing but great memories. I hear it from people all over the world still when I’m touring. Last tour a girl from Berlin came up to me and said ‘I grew up in Siberia and listened to The D4 in the early-2000s’. I hear it from people like the Arctic Monkeys and bands that have gone on to be huge that saw The D4 at a show and they remember when I cut my foot open and there was blood all over the stage and it was one of the reasons they started a band. I hear it all the time and I’m really proud of that. I think it’s pretty cool.”

Auckland City Limits, sponsored by Spark, is on at Western Springs Stadium and Park on 3 March 2018. Early bird tickets are available now.