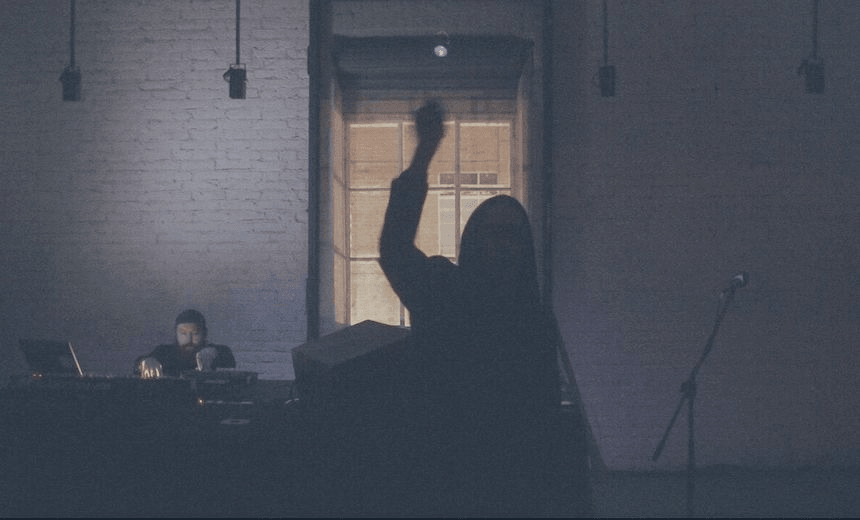 “There is more to be experienced than can be seen with the eyes or spoken about with language,” muses Christchurch-raised electronic music composer Fis (Olly Peryman), speaking by video chat from Zaragoza, Spain. “Language is just a subtext of possibilities for consciousness. Language is beautiful. Actually, it’s fucking beautiful. I think in the right hands, words can cover a lot; they can get very fucking close. But, so much of what this record is doing and saying has to be known and experienced in silence.”

Over the last three decades, Taonga pūoro practitioners like Richard Nunns, Hirini Melbourne (1949–2003) and Brian Flintoff have helped revitalise these once forgotten ceremonial wood, stone, bone and shell flutes, horns, percussion and whirled instruments, and reconnected them with New Zealand’s national consciousness. We’ve heard the haunting pūrerehua, pūtōrino, and the kōauau in film scores, TV commercials, and popular music, along the way coming to associate them with our natural landscape, weather, native wildlife, and pre-colonial history.

Clear Stones, on the other hand, is Taonga pūoro as we’ve never heard it before. Working with recordings of Thorne’s playing, Peryman augments their distinctive tonalities with electronic manipulation, sample-based production and UK sound-system culture indebted sub-bass pressure, throwing up a whole new sonic experience that sits comfortably alongside experimental composers Roly Porter and Paul Jebanasam’s panoramic concept albums on Subtext. “Olly worked so hard,” Thorne says, speaking by phone from Palmerston North. “The wonderful thing about the album is it’s almost entirely made of Taonga pūoro. That’s what’s truly different, he’s taken my recordings, turned them into something else, and then I play live with him.”

“What inspires me about [Clear Stones] is that it achieves a deep synthesis/symbiosis between the artist’s instrumentation and approaches,” explains Subtext Recordings boss James Ginzburg, writing by email from Berlin. “I am always interested in music that transcends its constituent parts and comes alive as a soundworld that functions as a terrain the listener can occupy in a direct and unmediated way. I feel that this is often achieved by a reduction that simultaneously communicates subtlety and complexity.” As an example, Ginzburg makes reference to Japanese calligraphy, where, as he puts it, “…the visual experience is reduced to a small number of strokes that contain and communicate through their deceptively simple dynamism the living qualities of the artist and the world they occupied at that moment.”

Although Clear Stones was released earlier this month, Thorne and Peryman took their first steps towards the project in July 2015. “I don’t know how it started for him, but I know how it started for me,” remembers Thorne. “Someone I know got hold of me and said, ‘Hey man, this guy Fis is talking about your music on The Quietus. I thought, ‘Wow, this is awesome!’ I found him on Facebook, messaged him, and asked if he wanted to do some work together.” Thorne had been dreaming about collaborating with an electronic music producer for a few years, with the loose idea that he’d work with someone who made beats in the tradition of the Bristol school of trip-hop and downbeat (i.e. Massive Attack, Tricky). “That was what would have made sense, but shit man, growth doesn’t come from making sense,” Thorne laughs.

As it turns out, Peryman isn’t entirely sure how he first heard Thorne’s work either. “Knowing me, I was probably just mucking around on YouTube,” he says. At the time, he was living in Berlin and had just released his debut album The Blue Quicksand Is Going Now through boutique London label Loopy. Over the previous few years, Peryman grew from an obscure New Zealand producer and DJ operating on the fringes of drum and bass to an important emerging voice in experimental electronic music circles, along the way scoring EP releases on cult labels Samurai Horo, Exit and Tri-Angle Records.

Peryman was being tapped to play prestigious experimental music festivals like Berlin Atonal, and create DJ mixes for high profile online music media outlets like Fact Magazine. He felt strongly about turning the opportunities he’d been given into opportunities for other New Zealand musicians. At the same time, Peryman wanted to make it clear to people overseas that, in his words, “While you might see me on the same line-up as people like Tim Hecker, I’ve come to this musical world from a very different place.” So, he started to spotlight material from Thorne’s debut album Whāia Te Māramatanga.

Thorne has been researching and playing Taonga pūoro for 17 years, but he’s spent about 25 on stages around New Zealand and overseas, working with voice and a diverse range of instruments. In that time, a process that began with busking on the streets grew into solo and band performances within Palmerston North’s local free noise, punk, and experimental music scenes.

In 2000, two pivotal things happened while he was studying towards an MA at Massey University. First, he was gifted a kōauau flute, which served as his initial gateway into Taonga pūoro. Second, while completing a New Zealand music appreciation paper, Thorne was introduced to the electroacoustic works of pioneering New Zealand composer Douglas Lilburn. “Geography is a very easy way to consider sound I think,” Thorne explains. “The first time I heard Lilburn’s electroacoustic work it blew my mind. He created this geographic flyover music that felt like the landscape of New Zealand. It was a eureka moment.” Years later, Thorne would hear the same thing in Peryman’s music.

After a few months of conversation online, Peryman presented Thorne with the opportunity to perform with him at Berlin’s CTM Festival 2016. It happened to fall on Waitangi Day, the significance of which wasn’t lost on either of them. To prepare, CTM provided Peryman and Throne with a two-week artist residency at the ZK/U concept and practice space, and several days of recording time at Red Bull Studios Berlin. “We spent two weeks living and working together,” Thorne recalls. “I don’t think I’ve ever worked that hard on a collaboration. Olly could have gone home to his flat at night, but he didn’t. We had two beds, a work room, and we lived with each other while we prepared.”

Although they’d never met, they quickly bonded, discovering that aside from their spiritually and philosophically slanted thoughts on the relationship between sound and the natural world, they shared an easy-going sense of humor and could both laugh at themselves, or each other when they went too far. “This isn’t an ordinary relationship or music,” Peryman elaborates. “It feels more akin to some of the most significant relationships in my life.”

On reflection, Peryman admits their CTM performance was a little bit like “Taonga pūoro karaoke”. Regardless, the audience reception was warm, and Subtext Recordings put an album offer on the table. The day after the festival, Thorne returned to New Zealand, and Peryman began the process of producing Clear Stones. Over the rest of the year, they traded thoughts as Peryman wrestled the record into shape.

“It wasn’t the easiest process,” Peryman admits. “I had to become the artist who was capable of producing this record. There were moments where I had to wait. Frequency is like an infinite hard drive. I feel like Clear Stones already existed in the future. It was like it was beckoning me onwards, and making me go through the process and experiences that were necessary. You make the music you are emotionally ready to create. The more free you get as a person, the more free and powerful your art will be.”

In late April, Thorne returned to Europe, and they went on a short tour. Word about their CTM performance and Clear Stones impending release was spreading. They had the opportunity to perform at some experimental music festivals, theatres, and small clubs. This time, Taonga pūoro karaoke gave way to a collaborative musical dialogue that brought the two closer together, while affirming the path they’d walked to arrive there.

“I think something often gets lost in translation with language,” Thorne muses. “It’s great when English is a second language with your audiences. They say the most interesting things. At a show in Italy, one person came up to me and said ‘I was shocked!’ I thought, ‘awesome man!’ Another person told me he’d grown up in a city his whole life, his landscape was concrete and steel, but he could feel the glaciers and hear the birds when we played. People would go on the most fantastic little journeys and express them to us.”