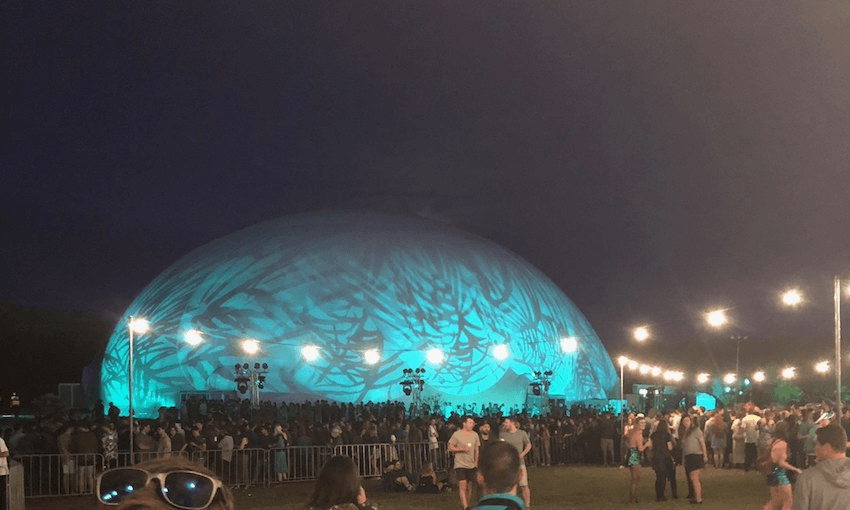 Going to PHAROS this weekend? Here’s what to expect

The much-anticipated PHAROS event debuted last night just outside of Auckland. Here’s what you need to know about the notoriously secret event.

Donald Glover has yet to fail. Successful stand up comedian, television writer, comedic actor, dramatic actor, showrunner, rapper, and producer. It’s a bit ridiculous when you think about it for too long. And ridiculous is exactly what his PHAROS concert/festival/experience was, in the best and sometimes worst ways.

Here’s what you can expect at PHAROS tonight and tomorrow night.

Thankfully it didn’t rain yesterday but there were still muddy areas by the end of the night. With heavy rain overnight, it’ll be a swamp.

THERE WILL BE QUEUES

Everyone’s talking about the queues, and rightly so. They were long. With the dome venue only allowing people in one at a time – with a pit stop to have your phone locked in a carry case – it unsurprisingly took an age to get everyone inside. I waited in a tight crowd for over an hour before entering. Some waited for two. It’s no surprise that standing outside for that long left a bad taste in a lot of fans’ mouths. But what we didn’t know was that PHAROS set itself apart from other music events with one key factor.

I waited for an hour to get inside. Once in, I realised I needed to go to the bathroom so had to leave again then rejoin the queue. I got in near the end of the line, didn’t push in front of anyone, and spent the entire show 15 metres from the stage. Someone could’ve been the literal last person to enter the dome and would’ve been in a prime position. The stage is in the middle of the dome and the dome isn’t big. It’s impossible to be far from the action. So unless you want to be up against the railing, don’t bother rushing to join the middle of the queue. Grab another drink and some food outside and relax. Speaking of drinks…

YOU WON’T BE DRUNK AT THE END OF THE NIGHT

Because of the aforementioned hour-long queue, a lot of fans had sobered up by the time they got to the entrance of the dome. Drinks aren’t allowed inside the dome and no drinks are for sale in there so anyone in the thick of it can expect to go close to three hours without a beverage. Personally I loved that by the time the show started the ground wasn’t sticky, no one was spilling drinks around me, and no one was being a bad drunk. In saying that, no drinks meant no drinks at all.

Even water is forbidden inside the dome. If you need it, you have to leave and come back in, so keep that in mind if you’re planning to get in early. Take an empty bottle to fill up at the free water stations.

No spoilers, but there’s a reason it’s in a dome. With everyone being so close to the stage, it’s easy to find yourself locked in on Glover’s incredible dancers and band. But don’t forget to look up. There are multiple shows happening and you don’t want to miss any of it.

It’s so loud. Like, standing directly in front of the speakers loud, but for everyone. Hopefully that gets adjusted over the weekend but at times everything was so loud it was hard to hear Glover speaking between songs. Take earplugs if you can. At times it sounded better with a bit of muffling. HOT TIP: there’s plenty to see wherever you’re standing but Glover seemed to spend the most time singing towards the sound desk. If you can position yourself in that area, you’ll get the most action.

EXPECT TO HEAR SOMETHING NEW

You’ll hear the hits as well but there’s a reason phones are locked up.

I don’t dance but I danced a lot last night because as a performer, Childish Gambino’s stage presence is second to none. Even on a circular stage it felt like he was always in front of you. And with an incredible crew of backup singers and dancers going nonstop, it’s very hard not to join.

YOU’RE NOT MISSING ANYTHING BY LEAVING STRAIGHT AFTER

Technically the event finishes at 9am the following morning but that is simply convenience for people who don’t have transport options at midnight. If there’s a ride going, take it. The show is very much over once Glover finishes his performance.

Never ever have I been to a concert or festival where the fans came out of the show and sat around on the grass having a nice chat. Because everyone was sobered up by the time we exited the dome, and there was nothing else to see, people just got some food and one last beer (they limited to one drink per person by that time) and sat around talking. It was quite strange to see but really nice. I’m starting to think that was the intention behind the whole event. All the seemingly pedantic rules around privacy, behaviour, and substances were in service of making people experience the music without distraction. No drinks, no phones, no worries.

I’ve never had more fun at a music event than I had last night at PHAROS. I’ve also never been less hungover, despite expecting the worst. In saying that, I turned out to be the perfect customer: someone who likes concerts and can get into them while they’re happening but can’t handle more than a few hours of drinking before just wanting to go to sleep. And in a strange, strange turn of events, that’s exactly what everyone was expected to do at PHAROS. And they did it.

There was an almost non-existent police presence. The security weren’t called security, but “fan safety”, and I didn’t see a single person there being disorderly. All the official PHAROS signage for merchandise, drinks, food, camping etc were written in both English and Māori, which was a small but very notable touch. As we were politely ushered back the camping area (no drinks allowed there) shortly after the dome performance was over, it felt like being at school camp. In a good way. But if you’re going to PHAROS thinking you’re in for 12 hours of straight partying, you’ll be sorely disappointed. There’s a tent where you can paint if you want though.

PHAROS was promoted as an out-of-this-world festival experience, making fans – or me at least – expect a long night of buzzy mayhem and drunken madness. Instead it was the exact opposite: a music event, meticulously curated by Glover to bring its attendees back down to Earth.