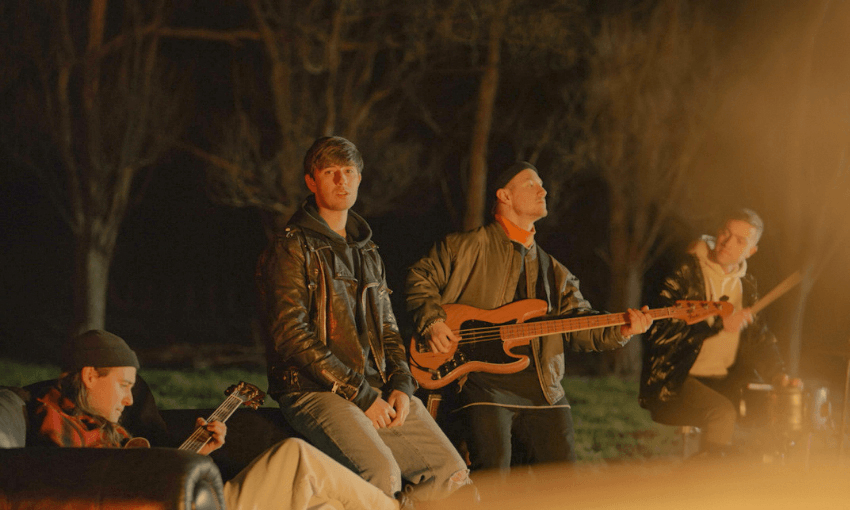 Drax Project are set be the sound of the Kiwi summer, again

Drax Project are back from LA, and finalists in next month’s Aotearoa Music Awards for single of the year. Sherry Zhang catches up with the band as they get ready to release their new single ‘Firefly’.

In a corner of the lounge at Universal Music’s Auckland offices sits an oversized plaque, made to commemorate a few of Drax Project’s early career highlights: their four-time platinum single ‘Woke Up Late’, platinum single ‘Toto’ and certified gold EP Noon. They’re the kinds of achievements that most bands spend entire careers chasing, but for these Wellington jazz school friends who went from busking on street corners to headlining festivals, they’re only the first steps.

“It’s just gathering dust here,” jokes Shaan Singh, the band’s frontman, gesturing towards the plaque with a tone that suggests quiet confidence rather than embarrassment. As I’ll soon find out, the band aren’t too stricken with the New Zealand habit of overt humility. They’re here to make hits, and they’re not ashamed of it.

Though the name is a portmanteau of “drums” and “sax”, Drax Project is more than that. There’s guitarist Ben O’Leary, drummer Matt Beachen, singer and saxophonist Shaan Singh, and Sam Thomson on bass and synths. Despite describing themselves as a “spicy pop” band, they’ve always stayed true to their jazz roots.

Their new single ‘Firefly’ is a Latin dance-pop-infused track that Singh imagines playing somewhere hot and a bit grimy. “It’s got a nighttime club feel but with the grandness of the horns section,” he says.

Written in LA, ‘Firefly’ was produced by Rogét Chahayed and Imad Royal, and features American rapper Fetty Wap alongside Auckland musician Aacacia, who won the band’s contest to perform them at last summer’s RnV.

Chahayed is a Grammy Award-winning producer who’s worked with platinum-selling artists like Drake, Calvin Harris and Travis Scott; Imad Royal, also Grammy-nominated, has worked with Panic! At the Disco and Doja Cat. Singh recalls the first time they met. “It was crazy, I didn’t want to Google him,” he says. But he soon got over it. “You meet them and they’re such a big deal. But then you see eye to eye on stuff, it’s like ‘oh cool, my idea is actually good’.”

O’Leary remembers the track’s inception clearly. “It was already 9pm, and they [Chahayed and Royal] were pretty keen to wrap up.” But the band were in the zone, with O’Leary playing around with a riff on his guitar. “We were all like, ‘ahhh’. There was a spark, something supernatural.” And, except for Fetty and Aacacia’s parts, they finished writing the song in three and half hours.

Asked if they’d intentionally set out to include Latin influences, they maintain it developed organically.  Says Thomson, “it’s somewhere between Latin and something else, something pop.” Beachen says the salsa elements remind him of ‘Senorita’ by Justin Timberlake. “It’s just a fun song.”

The featured rapper on the track is Fetty Wap, best known for his chart-topping platinum singles such as ‘Trap Queen’ and ‘My Way,’. “When we sent [the track] to him and he liked it, we were like whoa!” says Singh. He reveals that the band struggled to keep the collab a secret, hinting at a few more high-profile collabs in the works.

Like many New Zealanders coming home during Covid-19, Drax Project are trying to see the silver lining in their sudden change in international touring plans. Asked if they did their fair share of soul searching during lockdown, Singh laughs. “[We] reframe it as taking charge of our destiny.”

They spent two years on the road, and often wouldn’t find out they were joining a month-long tour until the week prior – which is what happened when they were asked to support Christina Aguilera last year in Europe. “It was just always, ‘fuck, OK! Let’s go,” remembers Singh. For Thomson, lockdown was the first time they got time to actually sit down and think. “Actually, we’re the most ahead of the game we’ve ever been.”

While grateful for their adventures overseas, the band says they all got a bit homesick and missed their girlfriends. Now, says Singh, “I can make future plans for the first time in four years.” Thomson is similarly excited about the free time. “When we were in the States, you couldn’t just see what friends were around on an afternoon off and go to the beach.” They’re in no hurry to leave New Zealand, and say they probably wouldn’t base themselves overseas again.

While Drax Project might want to make regular hits, Singh concedes it’s a pretty ambitious goal. “You probably don’t even want to say you want number one hits. It’s not up to you,” he says. “You do your best job, and people listening to it make that decision for you.” He references Jawsh658, the 17-year-old producer from Manurewa whose track ‘Savage Love’ with Jason Derulo skyrocketed to the top of the charts in over 15 countries. “I’m sure when he wrote it, he didn’t think it’s going to be a number one hit,” says Singh. “It’s just a good song.”

Even though it’s up to their audience whether a track hits number one, Drax Project are confident that at least they’re giving it their all. “You don’t want to look back and think, ‘damn, we could have done a whole lot more’,” says Singh. “And now with a few of our singles on the radio, and hitting platinum, we trust ourselves.”

The band says they never planned for their Aotearoa Music Awards-nominated track ‘Catching Feelings’ to become such a hit. “We didn’t plan to write the song as a collab with Six60. Honestly, we were just vibing, and hanging out.”

Does Drax Project know how they’re going to maintain chart-topping status? It seems like they’ve perfected the formula, but the band say that while they’ve got the music, they’ve got no plan – though, as Beachen says, “maybe we should”.