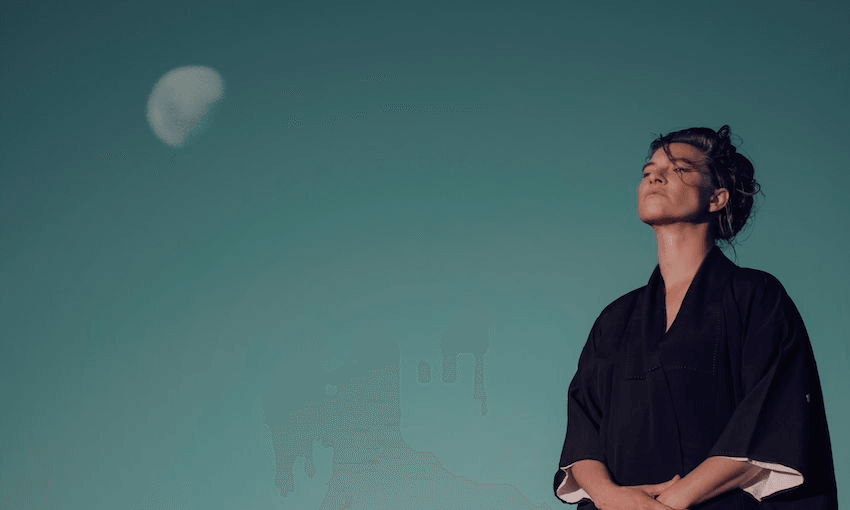 Love her or hate her, US musician Amanda Palmer has no plans to leave New Zealand anytime soon. She opens up to Stewart Sowman-Lund about her new life in Havelock North and the moment she was left alone in a foreign country during a pandemic.

Amanda Palmer has been in the country since just before we went into nationwide lockdown in March. Now, Hawke’s Bay is where she calls home.

“I would identify as a person that lives in Aotearoa,” Palmer told The Spinoff in late July. “I am really coming to accept that I live here and that life needs to march on.”

“Lockdown was lockdown, but now it’s about creating a new life.”

Born in New York in 1976, Palmer’s career in music didn’t take flight until the early 2000s as one half of punk duo the Dresden Dolls with drummer Brian Viglione. Together they released two albums and, despite a brief hiatus, have continued to perform together ever since. Her solo career has seen her release three albums, a book and become a cult hit on the touring circuit.

Arriving in New Zealand for what was meant to be a three-date tour in March, Palmer expected to be here for just a week, “including a two-day vacation in Hawke’s Bay with an old friend”.

Then, the Covid-19 crisis ramped up a notch. At the time, Palmer was apart from her husband, author Neil Gaiman, and four-year-old son Ash, who were in Melbourne. Gaiman is the mind behind novels like American Gods and Good Omens (with Terry Pratchett) – which have both been turned into acclaimed television series in recent years – and Coraline, which was later adapted as a stop-motion animation. He’s also written episodes of Doctor Who.

That was four months ago, and Hawke’s Bay is where the singer has been ever since. She said she considers herself one of the luckiest human beings on the planet.

“I happened to be here at the beginning of lockdown and decided to stay and am incredibly grateful that I have not been kicked out of the country,” she said.

Holed up in the Bay, Palmer – along with Gaiman and their child – had no idea how long they would be stuck in New Zealand. But with the rest of the world racking up thousands of cases of Covid-19, New Zealand seemed like a sanctuary.

“The sweet Airbnb that was supposed to be my crash landing pad after a year of touring turned into my first lockdown. Then we rented an Airbnb up in the hills of Havelock North and stayed there for a very long time.”

The decision to stay in New Zealand – pretty much the furthest away from her home as possible – wasn’t an easy decision, but Palmer said it was always the right one. “I read the writing on the wall and I knew that things were not going to be normal in America for my child.”

That turned out to be a prescient decision: America now has more than six million cases of Covid-19. Her hometown of New York City has been one of the country’s worst-hit – more than 32,000 people are reported to have died.

So after lockdown, Palmer decided that staying in New Zealand was still the right thing to do. It was around this time that Gaiman, her husband of almost a decade, decided to leave her and Ash in Havelock North and travel back to the UK after agreeing they “needed to give each other some space”.

“I had to put together a community, find a school, find a car, find a place to live. I had to do that with no partner because Neil left.”

Gaiman’s departure made headlines around the world, not just because of his fame and the fact he’d left his wife alone in the middle of a pandemic, but because of how he went about getting back to the UK. After flying into London, he drove to his home on the Scottish island of Skye, defying Covid-19 restrictions. His actions were labelled “selfish” by Scottish MP Ian Blackford. He later apologised, but not before his moves had been splashed across the internet, dragging Palmer in. Despite the dramatic departure and reports the pair had split, the pair have confirmed they’re still together.

Palmer, however, said she was prepared for it: “I spent the last year of my life touring the entire globe, making myself very vulnerable and doing a four hour storytelling and song show where I talked really openly about the hardest things I could possibly talk about: having abortions, having a miscarriage, being with my best friend while he died from cancer.”

“I did that every night. It was a super intense year,” which she said set her up “beautifully” for the situation she now finds her in. “That tour created an incredible amount of resilience in me,” she said.

Of course, this isn’t the first time Palmer – who seems to have just as many haters as she does fans – has been the subject of online scrutiny. An advocate for sites like Patreon and Kickstarter, Palmer hit headlines a few years back for “paying” volunteer musicians on tour with “hugs and beer”. It came after she’d raised more than a million dollars to cover costs for her new album.

The rebuke was short and sweet. Palmer backtracked, after first defending the policy, and announced in a blog post that guest musicians would, in fact, be paid for their time.

“I see your points. Me and my band have discussed it at length, and we have decided we should pay all of our guest musicians. We have the power to do it, and we’re going to do it,” Palmer wrote.

Palmer is candid about the cycles of vitriol often directed at her: “Sometimes I look at them as strange, upside-down gifts. I don’t think that everyone will agree with me and if they don’t it’s absolutely fine for them not to support me, so there are always these moments of tension and release where I state my case and my beliefs and then the audience can decide what to do with it. Those moments are necessary.”

Social media, according to Palmer, is basically a full-time job. It’s where her most ardent fans reside, but also her most vicious trolls. She said the past 20 years spent online had taught her a lot.

“It’s like learning a language, and 10 years ago I did not have the skillset that I have now when someone shows up at my social media doorstep with a steaming pile of shit. Learning how to speak with that person is its own learned skill,” she said.

Part of that skillset is working out what is a valid critique and what is simply trolling. She says if someone objects to her views politely, she’s happy to spend time talking through her position on issues, like crowdfunding.

Currently, Palmer is in the midst of working on music inspired by her New Zealand experience and is preparing for a tour, recently delayed again due to Covid-19. She said she had no plans to return to the US just yet – America remains too unpredictable – and put down part of her decision to stay to New Zealand’s hospitality.

“The doors were thrown open very wide, in this very Kiwi way where everything happens very non-dramatically. It’s an incredibly unpretentious place and I’ve really appreciated that.

“[But] it’s been very humbling. Hawkes Bay is a really beautiful and understated community”.