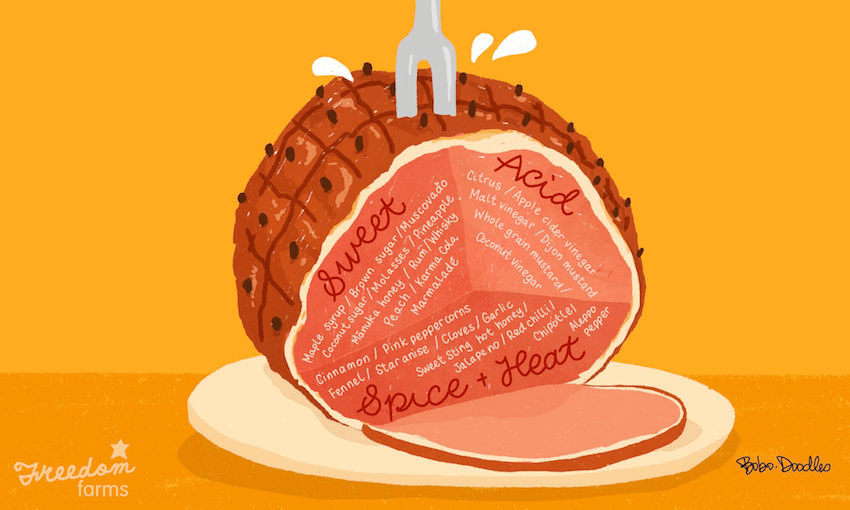 Christmas feels a little different this year, but one thing remains certain – ham. Freedom Farm’s Anna King Shahab explains how to get the best results at Christmas lunch.

This content was created in paid partnership with Freedom Farms.

In these uncertain times, perfecting one small thing can help brighten the outlook somewhat. In the lead-up to this year’s festive season, a glazed ham makes a very good “one small thing”.

Whether you’re going all-out or keeping it low-key, hosting the family at yours or gathering in a park this year, acing the ham is something you can start working towards now. Spoiler alert: it doesn’t actually take much work – just a bit of forward thinking, which we’ve done for you.

Start with the origin

We source our hams from a group of farmers in Aotearoa who value the same things we do: a farming system that is kinder for farm animals, takes it easy on the environment, and supports a food system that we feel really, really proud of. And their product also tastes bloody delicious.

Freedom Farms hams are available now at your local grocery store, Farro or Moore Wilsons. If you can’t see any in the fridge, pop up to the butchery counter and ask when they’re expecting deliveries – and don’t forget to say a big thanks for supporting great local producers!

Which ham to buy?

We all know choice can be overwhelming. In terms of portion size, 180g per person for Champagne ham and 200g per person for ham on the bone is about right. You might like to mix and match… grab a large ham for the main event, and a half or quarter for casual get-togethers before or after the big day (because as we’ve previously documented, you can never have too much ham). Let’s break it down…

A more modern version of traditional ham on the bone, the ham is partially deboned (leaving just the hock) and massaged back into shape. It’s super tender, and takes up less room in your fridge. Our Freedom Farms Champagne hams come in three sizes:

Half Champagne Ham 4-5kg – great for a smaller gathering

Ham on the bone

Our traditional Christmas ham – we produce a limited run each festive season. Expect spectacular flavour imparted by cooking with the bone in. Our Freedom Farms hams on the bone come in two sizes:

Half Ham on the Bone 4-5kg – big on flavour for smaller family get-togethers (and still enough for some sandwiches the next day).

All our hams are pre-cooked, but it’s so worth the minimal effort of glazing them for maximum impact in both looks and taste.

A glaze adds flavour, colour and texture – thank you, caramelisation! You’ll want about 1 cup of glaze for every 3kg of ham. You can get as experimental as you like with what goes in your glaze, but overall you’re looking to balance sweet and acid, and boost the depth with spices and possibly a lick of heat… the ham itself provides all the umami you need in this gathering of flavours. You can go large and add a lot of elements to your glaze, but simple three-ingredient glazes can be equally excellent.

See Bonnie Wong’s nifty illustrated guide to building a glaze, and here’s our go-to recipe for this year:

This quantity will glaze a half Champagne ham with perhaps a little left over. Double the recipe for whole hams. Leftover glaze can be kept in a jar in the fridge and used the next day – try brushing on French toast as it grills for your Boxing Day breakfast.

Put all the ingredients in a saucepan and bring to the boil. Lower the heat and simmer for 10 minutes, until it’s starting to thicken a little. Remove from the heat and use.

*If you like a pronounced spice profile, locally made Honest rum is perfect here!

This content was created in paid partnership with Freedom Farms.

We source our hams from a group of farmers in Aotearoa who value the same things we do: a farming system that is kinder for farm animals, takes it easy on the environment, and supports a food system that we feel really, really proud of.