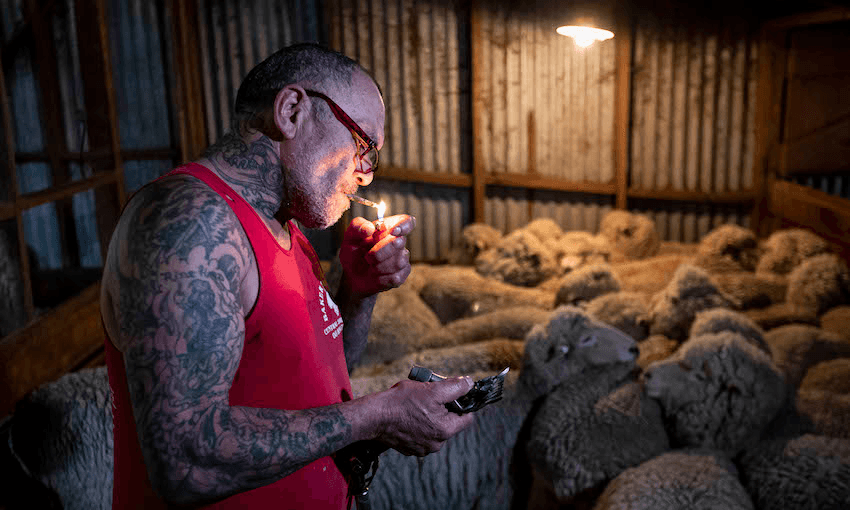 Ranfurly sheep shearer John has lost a son and a son-in-law to suicide photographed by Alden Williams for Stuff, who won New Zealand Geographic photographer of the year.

A year in Aotearoa: The photos that captured New Zealand

Ranfurly sheep shearer John has lost a son and a son-in-law to suicide photographed by Alden Williams for Stuff, who won New Zealand Geographic photographer of the year.

James Borrowdale learns the stories behind the images nominated for the New Zealand Geographic Photographer of the Year.

The room is crowded, cramped with the memories and resonances of a life. “A simple life lived, and a hard life lived,” photographer Nathan Secker said of his entry, a finalist in the Lumix Society category of the New Zealand Geographic Photographer of the Year competition. Last year’s Christmas cards hang from string looped on the walls, and sepia-toned family photos peek from among the houseplants and relentless bric-a-brac. In the middle of this kaleidoscope, if not at the literal centre of the composition, sits Secker’s 96-year-old aunt, Ida Ward, pink gloves warming her gout-ravaged hands. The door, slightly ajar, invites the mind’s eye out of the room, and into the rest of the life of which this photo is such a vibrant expression.

“You can live your whole life, and that’s your whole life just sitting in that house, in a couple of rooms,” Secker said of the sense he hoped to capture in the photo. But, he said, Ward was happy with her humble lot, and never complained. Her life hadn’t been an easy one: she was born on the West Coast into a poor eight-child family, made poorer when her father died young. With no benefit, the family lived off local whitebait, a house cow, and a vegetable garden, eventually moving across the Southern Alps to seek new pastures. The Kaiapoi home of the picture was the same in which Ward had lived since she married, well over half a century before. Even the mattress she slept on, Secker said, was the same one with which she and her husband – he died 30 or so years ago – had first furnished their home.

When Secker found himself in her home for the first time “in donkey’s years” he knew he needed to photograph it. “It was just a whole bombardment of the senses for me. I just went in and I’d never seen anything quite like it. It was like a museum piece.” And he documented it just in time. Not long after this photo was taken, Ward – having suffered a couple of falls – went to live in a rest home. She died not long after that; when I spoke to Secker, it had only been a couple of weeks since her funeral.

It’s a sombre thing to dwell on – but perhaps not unnatural in this strange, sombre year. Throughout this year’s finalists the preoccupations and anxieties of the age are writ large – Black Lives Matter, the Christchurch mosque massacre, climate change – but it is Covid-19 that looms the largest, both in those photo essays that tackle the subject head on (one by Becki Moss, one by Andrew Stewart) but also in those photos that, in simpler times, would be about nothing other than what they show.

Edin Whitehead’s entry, for example, a masterpiece of composition, shows a procession of Buller’s shearwaters/rako in flight, the Milky Way far above them. Looking at the photo now – she has an A0 print of it above her bed – brings with it a mixture of emotions. Whitehead is a doctoral researcher at the University of Auckland, her PhD investigating the effects of climate change on the lives of nocturnal seabirds. The photo was taken on what was meant to be a recce for a later research expedition on the Poor Knights Islands. It became, however, the last time she was able to get away in support of her research before lockdown hit, taking the season with it. “We had lots of fat chicks in burrows and we were going to stick GPS on their parents, and that all sort of went down the tubes with lockdown.”

But she returned from that trip, at least, with this photo: a finalist in the Electric Kiwi Wildlife category. In it, the birds, lit from below by a manual flash, seem to merge with the burning stars, like sentinels from this world flying into the beyond. It was about 11pm at night. Earlier, she’d been surveying the birds flying in at dusk to feed their chicks. There was no moon; it was the perfect opportunity to stay up, watch the birds, and try to execute a photo she had long visualised and often attempted. “Lots of attempts, and lots of failures. And thankfully one success.”

The fleeting nature of opportunity is something Gavin Lang, a finalist in the Resene Landscape category, understands intimately. The plan had been to summit as many as six mountains along the Main Divide that day; he and his climbing partner had been up since 1am. They managed three, before strong winds forced them off the mountain. Lang’s photo captures his partner below, head bowed to the Silberhorn arête as if in prayer, enclosed in his torch’s private bubble of light. Aoraki/Mount Cook is to the right, the flanks of the Tasman to the left, the Hockstetter icefall, cracking as its weight carries it over a lip towards the darkness of the Tasman Valley below, is beyond.

For Lang, the photo represents the connection between the climber and the mountain. “That’s your whole world, really. It’s step by step, it’s move by move. It’s in that world that you really get connected to the mountain. You’re focused, listening. Certainly always listening for any random sounds that might indicate either ice is falling from above, or something is falling below me.” The immediacy of the danger pushes the mind into a meditative state. “Death is ever-present, and you are forced to focus.”

That state draws Lang to the mountains. The Wanaka-based mountaineer is working on a book and film project during which he will summit all 24 3,000-metre-plus peaks in New Zealand. He has five to go in an undertaking he hopes will illuminate the benefits of the mountains on mental health. “There’s a certain energy in the mountains that I really enjoy and that seems to bring balance into my life. Despite it being a dangerous place and mountaineering often being seen as a self-centred pursuit, I really see its benefits.”

A similar instinct attracts Mitchell Clark to the outdoors. Clark is drawn to the unpeopled nature of those big South Island vistas: in their emptiness, they almost feel like his alone. “I have just started to admire the mountains quite a lot and I would say almost every photo that I take, regardless of what subject it is, there’s probably a mountain in it somewhere,” he says.

He works for Air Safaris, out of Lake Tekapo, and was on a flight over the Fox Glacier in January, when he noticed the curvature of the ice gracefully articulated by the pinkish remnants of ash and dust blown across the Tasman from the Australian bushfires. It appealed to his aesthetic sensibilities – clean, simple, but also momentarily puzzling. With no horizon line, it takes a second for the mind to settle on what exactly it is looking at. “It’s always kind of cool if there’s a question that’s linked to it – like, what is it? Because a lot of stuff that people see, it’s just like, cool, it’s a car, it’s a mountain, whatever, but if it’s something a bit different and something that you’ve never really seen before… If I took it before the ash all came across, people would just say, ‘It’s a bit of ice.’ [This photo] is just a bit different.”

There is also a less celebratory aspect to his photographic work. “Things are actually changing the landscape here, not just on the TV screen.” On a grander scale, that is something Clark – as a photographer, as a human – is intimately aware of. “I quite often get a lot of elderly people come in and say like, ‘Such and such was here and it didn’t look like this years ago.’” The example he gave was the Tasman Lake. Twenty-five years ago it didn’t exist, but melt from the glacier of the same name first created it and has ever since steadily been raising its level. “It is sobering,” he said. “Especially if you are relooking at everything every two years, and you actually physically see it with your own eyes.”

This content was created in paid partnership with the New Zealand Maritime Museum. For more information about the museum and its programmes, click here.