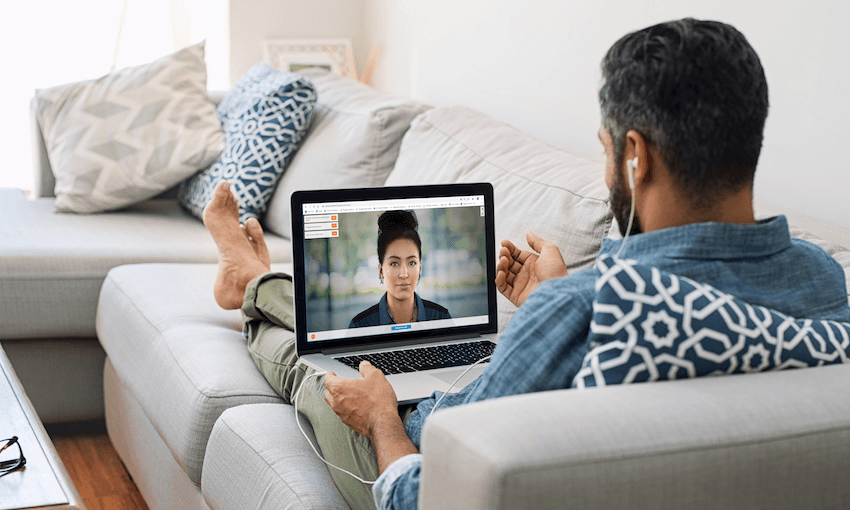 For years we’ve been worried about robots taking our jobs, but in fact it’s “digital humans” that are increasingly joining the workforce. At least, that seems to be the case in customer service. Southern Cross Health Society, New Zealand’s long-time and leading health insurer, is the latest business to welcome digital humans to its team.

“Aimee has just joined the team at Southern Cross, and we’re super-excited to introduce her,” reads an announcement on the Southern Cross website.

Like Siri and similar “digital assistants”, Aimee is powered by artificial intelligence and has a conversational interface. But what makes Aimee different is that she has a realistic-looking 3D human face. The idea is that you can interact with Aimee via your computer, tablet or smartphone, as if you were talking to a human customer service representative (CSR) by video chat.

But as well as having a human face, what makes Aimee different from other digital channels is her ability to respond with empathy and warmth. She represents technology that is increasingly able to recognise conversational cues and behaviours and what they mean. But to reach her potential, Aimee will need to earn the trust of Southern Cross customers.

“It’s in order to give our members the best experience we possibly can,” Watney said. “We’ve been slowly moving more to a self-serve model for those things that our members can do themselves – and want to do themselves.”

That said, Southern Cross was also mindful that with health insurance “there is still that need for the human touch”.

Southern Cross thinks it can get the best of both worlds, self-service and customer service, with digital humans. However, this needed technology to develop some of that humanity.

“When we felt that the technology had matured to a point where it was offering a really good experience we decided to kick off a project with UneeQ – and that’s what led us to Aimee today,” said Watney.

At the moment Aimee focuses only on what a customer says, formulating her answer based on the textual content of a conversation (as opposed to what she “sees”). But unlike chatbots, Aimee’s responses include appropriate motion and expression beyond just text. Going forward, Aimee could improve these responses via supervised learning.

For now, though, Aimee is very much in training mode – just like any junior CSR would be. Currently she is programmed to answer general questions only – for example, “what is a pre-existing condition?” She will not be able to talk about your actual pre-existing conditions, or any other sensitive information about your health. Indeed, you probably tell Siri, Google Assistant or Alexa much more private information on a regular basis than you’ll tell Aimee.

But Southern Cross plans to slowly and carefully expand what Aimee is allowed to do. In time, she may (with your permission of course) discuss your pre-existing conditions and even process a claim for you.

“The next thing we might ask Aimee to do is start giving advice to people. So starting to understand people’s needs, and then advising on what plan might be most appropriate to them,” said Watney.

Southern Cross is “feeling our way through this” and ultimately much will depend on how customers feel about dealing with a digital human. Another important consideration, Watney noted, is that Aimee doesn’t currently have any access to customer data.

While many of us have now accepted that AI is a part of our daily lives – with everything from Facebook to CCTV cameras in Auckland being at least partially run by AI – when it comes to our health data, we’re still wary of machines having access to our inner lives. How Southern Cross progresses with expanding Aimee’s functionality and integrating her into its core systems represents a new realm for AI’s involvement in our worlds.

Watney recognises this is something Southern Cross has to be careful with. But he’s confident AI will continue to evolve, not only in its technological power, but in how it’s perceived by people.

“As the technology gets better and better,” he said, “it’ll just feel intuitive. And it’ll get to a point where you’re still aware that you’re talking to a digital representation of a person – we’re never going to go down the ‘uncanny valley’ of trying to make out it’s a real person – but the conversation will be more intuitive and the accuracy will increase.”

“Plus,” he added, “as consumers we’re going to see more and more of these avatars in our everyday lives.”

This is projected to become the norm sooner than you may think. According to an ebook on UneeQ’s website, tech research and advisory company Gartner has predicted that a staggering 85% of interactions customers have with businesses will be non-human by 2020 – with AI in particular set to make up 95% of customer interactions by 2025. UneeQ’s Gavin de Steur thinks the recent success of chatbots in business has paved the way for more advanced digital human technology.

That assumes you’ve picked the right human avatar to represent your business. For Watney at Southern Cross, this was one of the early challenges when developing Aimee.

As Aimee grows more sophisticated over time, and may even one day approve and process your health insurance claims, one can’t help but wonder what will happen to the human customer service representatives at Southern Cross. Watney assured me that Aimee won’t be replacing its contact centre.

“We know that people really do sometimes want to phone us and speak to a real person when it comes to their health insurance, because you’re talking about people at a very vulnerable stage of their lives. Sometimes they need quite a lot of reassurance, so we don’t plan to use Aimee in those kinds of cases. What Aimee does is free up our call centre agents to help people when they really need it.”

So you won’t yet be talking to a digital human about your upcoming surgical procedure. At least, not until you get to know Aimee a bit better. Because like any human, she has to earn your trust first.

This content was created in paid partnership with Southern Cross. Learn more about our partnerships here.