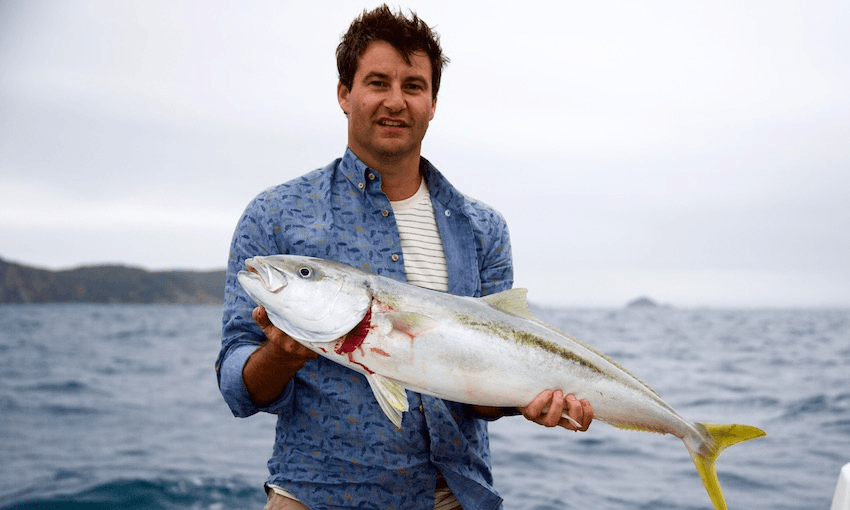 Kate Underwood shared some special seafood with Clarke Gayford and spoke to him about why the way we fish is so important.

Even though he now has access to the ninth floor of the Beehive, Clarke Gayford is still a Gizzy boy at heart. He’s grown up on and in the sea. He has fond memories as a kid in Mahia of going out in the dinghy to catch a feed. Fast forward a few years and he now goes fishing for a living. He is deeply passionate about the ocean and the responsibility of those who take from it, to care for it.

Earlier this month Gayford helped “dish up discussion” about New Zealand fish, how we use them, and how we look after their future, for Talking Plates, an event hosted by Eat New Zealand and Bellamys by Logan Brown, as part of Visa Wellington On a Plate. A group of 60 gathered on the fourth floor of the Beehive for an exquisitely prepared, five-course, ika and kaimoana journey put together by Logan Brown executive chef Shaun Clouston and Joshua Ross, head chef of Bellamys.

Gayford spoke to each species on the menu with the knowledge and respect that only a truly spirited fisherman can. The five courses featured a kina and blackfoot pāua chawanmushi, kahawai sashimi, crayfish dumplings with oyster leaf, a fascinating baked butterfish head and finished with seaweed toffee shortbread. The food was paired with Gayford’s dedication to the mission of showing us how to look at seafood in a more sustainable way, the importance of utilising all parts of the fish and celebrating different species.

I spoke to him about how we can better connect to the ocean by eating unfamiliar parts of the fish and unusual species.

You are clearly incredibly passionate about the ocean and what resides in it. Why was it so important to you to dish up discussion around New Zealand fish?

We have these fish that are just so good in New Zealand that they often hide the fish that are as equally good. We’ve always had our champions with tarakihi, snapper and blue cod. But events like this are all about trying to get people to think outside of those species. Our ocean is incredible and is loaded with all sorts of things that can be seen and eaten.

I think we are finally starting to wake up to it now in terms of our fish. For many people, so much of our coastline has been out of sight, out of mind. I’ve been lucky enough to have dived up at Three Kings off the top of Cape Reinga, down in Stewart Island, Fiordland, White Island, Gisborne, all around Auckland and the West Coast. What we have underwater is incredibly unique in terms of fish species and what you see from one end of the country to the other is really different in the ecology of the ocean. I do a lot of freediving and I always say that it’s never about the catch that you come home with – it’s everything about the experience you have while you are out there.

I make a habit of trying to talk to commercial fishers as I move around the country, and it’s incredible to see how those who are out there living it are often so deeply affected by the cycles of the ocean and tend to develop an almost spiritual-like connection.

How has our perception of the fishery changed and how are fishers changing the way they look at the ocean as a resource?

I’m confident that everyone is on the same page with wanting more fish in the ocean. But I believe we have an incomplete picture of our fisheries and it’s hard to understand what’s going on. A couple of fisheries are doing OK at the moment, we see a good number of snapper around because we know that snapper tend to have good recruitment years after our long hot summers.

The main point to understand is that there has been a huge shift in our baseline – understanding what things look like now compared to how they used to be is extremely difficult. Between generations, what used to be a “good day” out on the water is so vastly different to what it looks like today. With the recent example of tarakihi stocks, currently we have no understanding about the impact on that.

More recently chefs – both at home and in restaurants – are changing the way they treat fish and are rediscovering the value of the whole fish and embracing alternative species. Why is this so important?

Let’s start with New Zealand’s love affair with the fillet – which often detracts from the rest of the fish. In other cultures the rest of the fish is prized far above the parts that we eat: the cheeks, face, wings and frames are where the meat is sweeter and has a higher fat content, so it’s tastier. But mostly it’s about New Zealanders understanding and waking up to the possibility that we can and should be eating the whole fish – not just disposing of these parts over the side of the boat or putting them into the rubbish bin.

An English chef friend of mine moved to New Zealand for the fishing, and he arrived with no preconceptions about our fish. He caught a kahawai on the beach one day and the guy next to him on the beach told him that’s no good and to throw it back. He took it home, cooked it up and thought it was absolutely delicious, and he just couldn’t understand why it should be discarded. He’s always said to me, “There’s no such thing as bad seafood. You just haven’t found the right way to cook it yet.”

I like a good John Dory. It’s a quality fish, delicious to eat and they have very few bones through the fillet. The fillets on the butterfish are absolutely delicious – they flake off and you can eat it with a spoon. I rate butterfish higher than snapper, but most New Zealanders have never experienced or seen it because it’s just not readily available.

What role do you think chefs can play in reconnecting us to the ocean?

Restaurant chefs are the shaman, they are the ones we look to for inspiration. When you think about how New Zealand chefs and the restaurant scene have advanced and matured over the past 10 years, it’s pretty incredible. This drive to improve and the healthy competition among them means that as consumers we are winners. We go to restaurants and try to pick apart dishes and recreate them at home. The role of chefs to introduce different species and utilise the whole resource becomes super important and has a huge flow-on effect throughout the country and into people’s homes.

What are your thoughts around food tourism here and the potential in connecting tourism and fishing?

When people go on holiday they have to find somewhere to stay, they want to see stuff and they have to eat – it’s those food memories that create a connection to a place. If you are offering up the same food as your neighbour then there’s no lasting attachment through your stomach. But if you can offer up a local taste of what New Zealand’s about then I believe there is no greater ambassador than our seafood.

Why do you think we have become disconnected with the ocean and where our fish comes from?

Have we? Go to the regions. Regional fishing is still very real and that’s where the story and connection is. We have more coastline than mainland China and it’s all right there on our doorstep.

There is a real divide between people who aren’t, but there is a massive part of the population that still is. I think more and more people want to know where their fish is coming from and are looking for fish that is sustainably caught. If you can put a higher value on that, then it goes down the line and everyone benefits.

What can we do personally, as consumers, to better connect to our ocean?

I would encourage everyone to go out and explore more of our coastline for yourself. Once you start it becomes like a bit of a treasure hunt and remembering that it’s not always about catching fish, it’s more about understanding and being exposed to what’s out there. The more you do it, the more connected you become to it.

Gayford’s standout dish of the night was the kina chawanmushi. It was mine too. There was something poignant about the introduction to under-appreciated species and their full utilisation, consumed from parliament-embossed crockery at New Zealand’s political hub. Diving through the vibrant green onion oil to uncover slices of tender pāua amid the jiggly, murky, Japanese-inspired egg custard, I was in awe of the ocean. What lay beneath was something unique and utterly delicious, a showcase that celebrated every inch of Aotearoa’s most precious resource.

This content was created in paid partnership with Visa Wellington On a Plate. Learn more about our partnerships here.