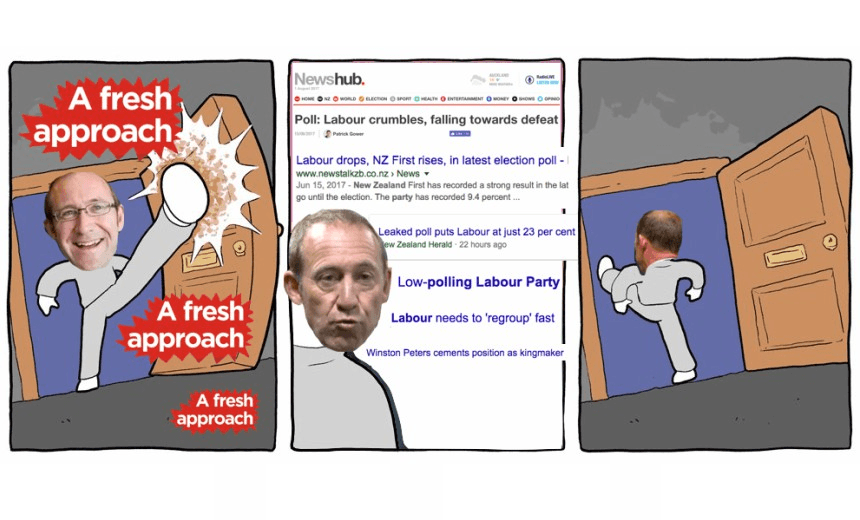 Getting young voters engaged in political discourse is a challenge no NZ party has yet cracked. Could memes save the day? Madeleine Chapman leads a guided tour.

At age five, most children are able to detect sarcasm and identify it as humour. By age ten, they’re able to differentiate between sarcastic and ironic humour. And somewhere in the middle, they’ll learn how to read memes.

Like a language, memes are harder to pick up as you get older. Not everyone will look at a photo of Kermit the Frog sipping tea/leaning on a wall/looking out a rain covered window and immediately know it’s supposed to be funny. Some will just ask what Kermit the Frog drinking tea has to do with your couple friends who post break up statuses and then get back together. Being 23 years old and working in media, I find myself in the sweet spot of having grown up alongside memes as they’ve evolved. I don’t need to learn them. But I have eight older siblings, at least six of whom are familiar with only the most rudimentary of the form. So when I want to make a meme mocking one of them and post it in the family group chat, my choices are limited to images and captions that are very on the nose.

It’s hard to classify meme knowledge as a skill but it’s certainly something that younger generations seem to understand with ease while oldies just see sub par photoshopping of stock images.

Like every good meme, allow me to segue clumsily to New Zealand politics and the 2017 election. I’m not invested in politics. Until very recently, my political frame of reference revolved around the fact that in 2014 the rich, white lady whose house I cleaned once a week while studying was a vocal National supporter and also casually racist on more than one occasion. So I voted Labour.

While I am of course concerned about social issues and how we can solve them, the language and fluff that surround every policy only makes me lose interest. Maybe I’m just an idiot. If I am, then I’m not alone. At the last general election, 64% of 18-24 year olds were enrolled to vote and 46% voted. Because New Zealand politics is boring. Not the issues and the ideas, but the execution. Look at the campaign ads. The only reason those ads have been watched at all is because they were meme’d.

Over the past few months, I’ve occasionally seen a local political meme pop up in my newsfeed. Most of the time I’m not entirely sure of the context of the joke but just knowing the meme format is enough for me – or anyone else – to understand it. I’ll usually have a chuckle and scroll on by, not realising that I’ve just unintentionally engaged in New Zealand politics. Unless you have friends who love a good political column or meme, it’s worryingly easy to live your life completely void of political discourse. Which is why political meme pages are more important than anyone, even the page admins, realise.

Political memes – good and bad, intentionally or not – are out here teaching the completely clueless some basic policy knowledge before the election. And it’s relevant knowledge, because the memes are made by young people and therefore whatever bias they have towards particular parties will be based on common areas of interest for the younger generations.

Never heard the name David Seymour? Don’t know what the fuss with Metiria Turei is all about? Don’t know who has good policies for young people? Trawling through the endless political columns will help with some analysis but for foundation knowledge, political meme pages are pretty good. Here’s a tour through New Zealand’s best.

As the name would suggest, these memes don’t discriminate. All parties and policies are targeted, though it would seem the administrators have a bone to pick with Gareth Morgan because The Opportunities Party are subject to some harsh burns. They’re also more critical of the left because memes are just so easy when your party is imploding (Labour, until very very recently). But overall, there’s a youthful balance, meaning everyone is scrutinised and NZ First is bad.

This meme might not seem very political but personality goes a long way in politics and this is a pretty accurate summation of the political leaders’ likability. A vital first step in political engagement is knowing who the hell everyone is. While it would appear that the administrators aren’t big fans of the National party, they’re nothing if not realistic.

I had just assumed that Labour would have a good immigration policy but after seeing this meme I decided to look further into it (I asked someone at work who knew what he was talking about and he explained why it was bad). Political engagement achieved!

Never one to shy away from sweeping generalisations, non-partisan memes also work to give a broad, slightly harsh, idea of what kinds of people vote for which parties.

I don’t know who runs this page (or any meme pages) but it is, unofficially, a Labour operation. Considering most young people would be left-leaning, its attacks on National and Act’s David Seymour are particularly popular.

Using “the ground is” instead of the traditional “the floor is” [see above] cements the below meme as out-and-out Labour, ie trying to engage with the youth and almost getting there. Luckily for them, David Seymour is easily the most memeable MP so it’s still good, all the while giving important and relevant policy information to potential student voters.

Like the classic hippy Greens, the Green memes are less critical of other parties and more wholesome support for the likes of Metiria Turei and Chloe Swarbrick. Wholesome memes are generally not as funny as edgy ones but as the party most likely to appeal to young voters, perhaps a bit of self love is what’s best.

But they’ll still go after the big dogs.

I was extremely late to the (political) party on this one, but it’s quickly become my favourite meme page. It doesn’t offer any political opinions, simply pairs a Kanye West lyric with a current political story. It’s so simple and yet so informative. Having become popular in the lead up to the 2014 election, the page went quiet and has only recently sprung back to life. I’m holding out for a “Just killed another career, it’s a mild day” lyric over a photo of Labour’s logo and Andrew Little.

In a rare meme move, the images don’t work on their own but require the caption explanation for context. This brings it a little closer to actual news but still keeps the joy of a dank meme. It’s genius.

Not all political memes are created equal

Unfortunately for all of us, sometimes you have to look past some truly terrible memes in order to find the good stuff. For example, after Jacinda Ardern was named as Labour’s new leader on Tuesday, Kim Dotcom (former politician lol) shared a terrible meme without crediting its creator Paul Le Comte, and Richie Hardcore (young political person) shared a bad meme t-shirt. Even I know that those five people have almost nothing in common besides being white.

Remember, kids, just because it looks well-executed, doesn’t mean it will make any sense. Sometimes – in fact, – the worse the meme looks, the funnier it will be.

The way in which we share information is rapidly changing and while politicians shouldn’t necessarily adopt memes as a vehicle for information (nothing worse than a Dad meme), they’d do well to realise that engaging with the youth vote requires a different approach.

Memes aren’t for old people and certainly not for politicians. As if to prove my point, former Labour party leader David Cunliffe just tweeted his endorsement of the Bye Bill atrocity. But memes are the future, whether you think they’re funny or not, and they’re unintentionally teaching ‘the kids’ about politics. So next time you’re feeling a little lost in local politics, head over to a friendly meme page, crack open a cold one, and get scrolling.