The Maungawhau subdivision of the Albert-Eden local board encapsulates just about everything Aucklanders love to get het up about: trains, golf, birds, and trees. As it prepares for an upcoming byelection, we’re bringing back our race briefings to explain what’s going on.

In the heart of the supercity lies what might be called a super-local-board: Albert-Eden. It’s centred around two maunga, and divided into two subdivisions named for them: Maungawhau (Mt Eden) and Ōwairaka (Mt Albert). Together, they’re home to almost 100,000 people. A byelection is currently being held to elect a board member for Maungawhau, the subdivision which covers the Auckland suburbs of Kingsland, Balmoral, Epsom, Mt Eden, Greenlane, and part of One Tree Hill.

What are the big issues?

It’s technically an Ōwairaka problem, but the Albert-Eden board as a whole has Chamberlain Park golf course to deal with. Last month, three vehicles on the motorway were hit by golf balls. Three holes have been temporarily closed by the council as a result.

The board is currently at peace with its plans for Chamberlain Park, which was the subject of a five-year battle between Communities & Residents’ dedication to an 18-hole game and City Vision’s desire for the 33-hectare park to house more than just golf. A compromise was reached in which all 18 holes get to stay, but areas of the park will open up as cycle paths and walkways, and additions will include  wetland and stream restoration as well as a small neighbourhood park at the western end. Many hope this is, finally, the end of the battle.

New developments between Grange Road and Prospect Terrace are putting the fear of the traffic gods in locals. Nothing’s been built yet, but what hell will be wrought on locals’ commute time is a topic of concern. Foodstuffs, alongside local developer John Dalzell, are building a supermarket, offices, apartments, and more on the site of the old UBD printing business. At a “meet the candidates” event last week, members of the (very small) crowd were petrified that apartments and a supermarket would make the Dominion Road traffic even more diabolical – and that’s without factoring in the light rail works.

Traffic is why transport is such a big deal: the CRL works mean the Mt Eden train station is out of action, and light rail works down Dominion Road are also freaking out residents. Long term, both these projects will make Maungawhau one of the most well-connected areas of the city.

Trees. The most immediate concern is a century-old Mt Eden pōhutukawa that was left off the protected tree schedule when changes were made to the RMA five years ago. Now, a landowner wants it gone. Cathy Casey and Christine Fletcher, who sit on the main Auckland council representing the Albert-Eden-Puketāpapa Ward, teamed up to rectify this oversight and an injunction is now in place to protect the tree temporarily, but if the board doesn’t fight for permanent protection locals will be furious.

Eden Park and its bloody noise.

This is the real issue. Four representatives from each subdivision make up the eight-person local board, which had a perfect balance of City Vision and Communities & Residents representatives, until C&R’s Benjamin Lee dropped out. Now the balance, uh, hangs in the balance. 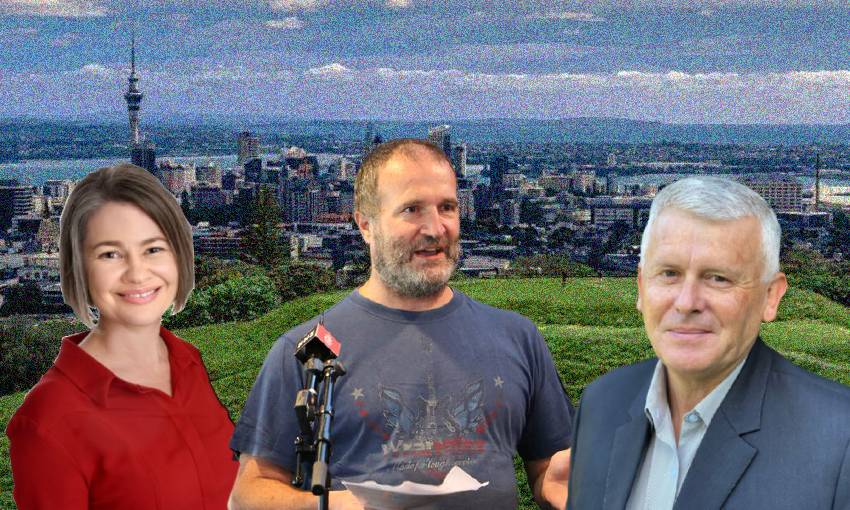 From left to right: Bernadette Power, José Fowler, and Will McKenzie.

The three candidates are pictured above. On the left we have Bernadette Power, the City Vision candidate. She’s a lawyer and light rail enthusiast, and narrowly missed out on being elected 2019. She supports continued protection of the tree, lives in Balmoral, and has plenty of experience working on big transport projects. She’s said that from City Vision’s end, the plans for Chamberlain Park are set in stone.

On the right is Will McKenzie, the C&R candidate and a resource management lawyer. He’s a self-confessed “nerd for urban design” who loves tiny parks, and brought the AFL to Western Springs. He’s previously backed causes including Save Chamberlain Park and Friends of Fowlds Park.

Running as an independent is José Fowler, a development manager and occasional rugby and cycling coach at local schools and clubs. He was once a chairman of the pro-Eden Park stadium Eden Park Residents’ Association (not to be confused with the Eden Park Neighbours’ Association, which is anti-Eden Park stadium). He ran for C&R in Ōwairaka in 2019; he lives on a street that rests on the boundary between the two subdivisions. He’s been living in that house for 21 years. His motto is “give neighbours what they want, not what political parties want”. At last week’s “meet the candidates” what he wanted was to leave, having seen there were very few members of the roughly 30-strong crowd that weren’t friends or family of candidates. And so he did. The man doesn’t waste time.

Power has a strong army of volunteers, having mobilised Young Labour for pamphleting. McKenzie has Save Chamberlain Park supporters on his side. Fowler’s a wildcard, but he’s a strong option for anyone worried about party politics in their local politics. It’s anyone’s game!

When does voting close?

This article has been updated to correct language around wards and local boards, and to clarify the City Vision candidate does not intend to upset any current plans for Chamberlain Park.