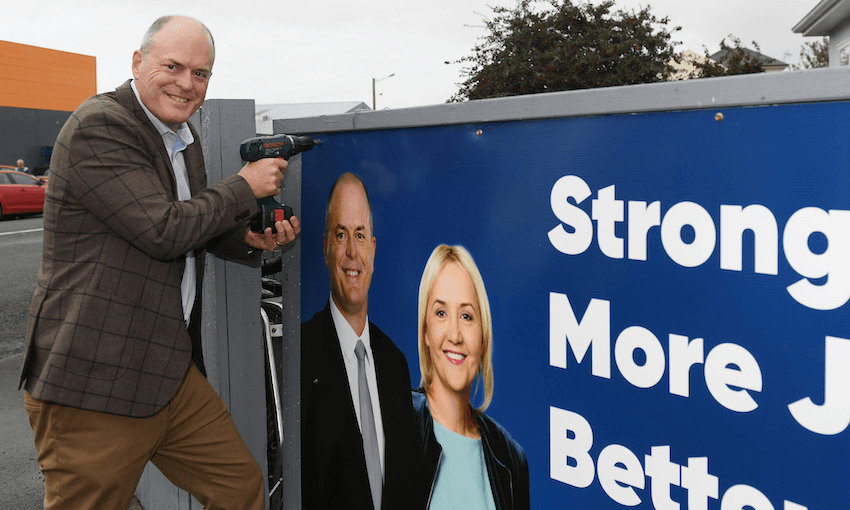 Just over seven weeks after he rolled Simon Bridges to become leader of the opposition, and with under 10 weeks to go to the election, Todd Muller has quit. Here’s a reminder of how it unfurled – and unravelled.

A Colmar Brunton poll for TVNZ puts National at 29%. It’s just the latest grim news for Simon Bridges, whose personal rating as preferred prime minister has fallen to 5%. It’s a compelling portent on the eve of an emergency caucus meeting to determine the future of the leadership.

Todd Muller is elected leader of the National Party, to replace the ousted Simon Bridges, with Nikki Kaye made deputy, replacing Paula Bennett. In an implicit criticism of Bridges, Muller says: “I’m not interested in opposition for opposition’s sake. We’re all tired of that kind of politics.” Half seriously, press gallery journalists talk of “Mullermentum”.

Todd Muller announces his reshuffle. Paula Bennett falls down the rankings, Amy Adams returns from imminent resignation to a senior role, and Simon Bridges is out of the top 20, said to be taking some time to consider his options. There are criticisms around a lack of diversity, with no Māori MPs on the front bench. In an awkward interview on Q+A, Muller struggles to answer questions around his fiscal plans.

Muller’s first sitting day as leader is a debacle. In a devastating track on Newshub that looks like an overwrought scene from The Thick of It as the camera stalks the caucus corridor, Nikki Kaye wrongly identifies Paul Goldsmith as Ngāti Porou.

Having previously batted away questions around a Trump-supporter Maga hat – as photographed on display in his office by The Spinoff’s Alex Braae in an earlier interview – which he’d picked up as a souvenir in the US some years earlier, Muller backtracks, saying it won’t make the shift to his new office as leader.

Todd Muller gives a speech at his local rugby club, designed as a reset of his leadership. He lays out his philosophy and background, but much of the attention is focused on an upside-down tino rangatiratanga flag.

Speaking in parliament, National health spokesperson Michael Woodhouse says that he has learned two women granted exemption from isolation, and who subsequently tested positive for Covid-19, had not in fact driven directly from Ellerslie to Wellington, but stopped and had a “kiss and a cuddle” with acquaintances.

He ended up being proved at least half right, and it began what looked liked a strategic pivot from the focus on economic recovery to criticisms of the government health response. Among other attacks, Woodhouse claims, without evidence, that a homeless man had blagged his way into a free fortnight at an isolation hotel.

A Colmar/TVNZ poll puts National up to 38%, with Muller’s preferred PM rating at 13%.

Media report they have been leaked private details of New Zealanders with Covid-19 in quarantine. None of the three recipients of the information choose to reveal the details themselves. The leak is condemned by National as a sign of slipshod management of confidential information.

Clare Curran, outgoing Labour MP, reveals to the Spinoff that Michael Woodhouse had, eight years earlier, been photographed with a debating prize that consisted of a toilet seat with her face on it.

The government announces a formal inquiry into the leak to be led by Michael Heron QC.

Simon Bridges posts a video of a walk with a baby yak.

In a flurry of statements, we learn that the private Covid patient information was leaked by Michelle Boag, who received it in her capacity as acting chair of the Auckland Rescue Helicopter Trust, to Hamish Walker, the MP for Clutha-Southland.

Muller tells media he is angry with Walker, and indicates the matter will be referred to the National Party board. Before the board takes action, Walker announces he will resign from parliament at the next election.

Internal polling is reported to put the National Party at 32%. Muller’s press secretary declines an interview with Newstalk ZB’s Heather du Plessis-Allan because he is “having a cup of tea and a lie-down”.

Pressed by TVNZ over whether Michael Woodhouse had received similar information from Boag, Muller repeatedly says he had not.

Woodhouse admits he repeatedly received private health information from Boag, but it was not the same information Walker leaked, and he had now deleted it.

Muller says he did not lie over what Woodhouse knew, and that the party had been “transparent” on the matter. Michelle Boag resigns her National Party membership.

With Todd Muller refusing to appear on media over the weekend to face questions over the scandal around the leaked health information, Nikki Kaye instead appears on Q+A, where she defends her leader, though acknowledging he “could have been clearer”.

The day begins with a jolt. Muller had been expected to speak to a business audience in Auckland on the subject of infrastructure. But at 7.33am a press statement in Muller’s name lands in journalists’ inboxes.

“It is more important than ever that the New Zealand National Party has a leader who is comfortable in the role. The role has taken a heavy toll on me personally, and on my family, and this has become untenable from a health perspective. For that reason I will be stepping down as Leader effective immediately.

“I intend to take some time out of the spotlight to spend with family and restore my energy before reconnecting with my community. I look forward to continuing to serve as a loyal member of the National Party team and Member of Parliament for Bay of Plenty.

A National caucus meeting is expected to be held tonight in Wellington.