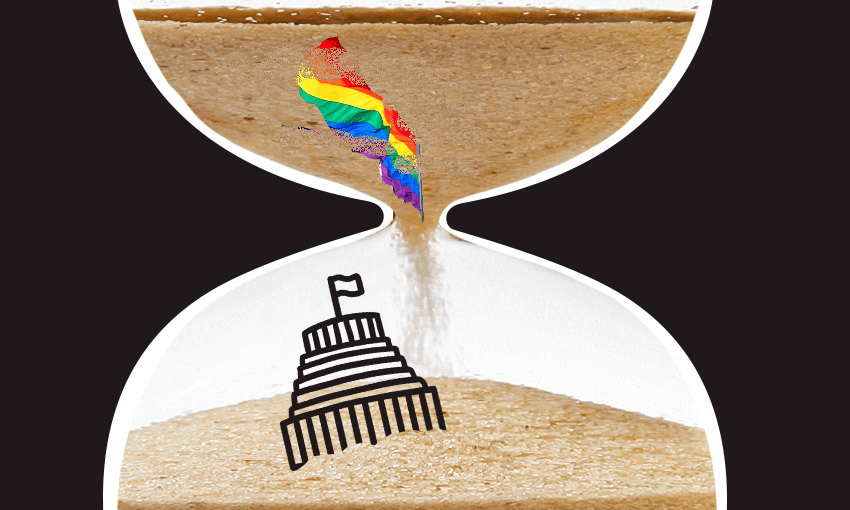 New Zealand won’t ban conversion therapy in 2021, and here’s why

The fight to ban conversion therapy has been a long one for the queer community, and it’s not over yet. Shaneel Lal explains why we won’t see a ban before the new year, despite the government’s ambitious goal of enacting one before Christmas.

Yesterday was the last sitting day of 2021 in parliament and the Conversion Practices Prohibition Legislation Bill has not returned to the House for a second reading. Before it becomes law, the bill needs to pass at second reading, the committee of whole House and third reading, as well as receive royal assent, meaning it will not pass in 2021.

The New Zealand queer community has waited years for our government to ban gay and gender conversion therapy. In 2018, Young Labour and Young Greens petitioned for it. In 2019, the justice select committee reported against banning conversion therapy, and Labour left the select committee’s position unchallenged. During the 2020 elections, grassroots activists created enough political pressure for Labour to commit to banning conversion therapy, and they set an ambitious goal of banning it before Christmas this year. It was an astounding commitment because at that point, Labour hadn’t done any foundational work that would have helped them achieve their goal.

In July, minister of justice Kris Faafoi introduced the Conversion Practices Prohibition Legislation Bill. The bill received the support of grassroots activists like myself but it didn’t receive our confidence. The bill was inadequate and ineffective and required significant changes if it were to eliminate conversion therapy and give the queer community any protection. The queer community knew we had to put up a fight to convince or pressure the justice committee to amend it.

The Conversion Therapy Action Group launched an online campaign promoting the select committee process. The campaign was a significant success, receiving support from all sectors of society – religious people, medical bodies, mental health organisations, university student groups, teachers and parents. No one expected a record-breaking 106,000 submissions to the justice committee on the Conversion Practices Prohibition Legislation Bill, but there were so many submissions because so many people believed the bill to be seriously flawed. The large number of written submissions took a very long time to process and it was exacerbated by a nationwide lockdown. In addition, around 3,400 people requested to make an oral submission, overwhelming the justice committee, which created subcommittees to hear them. Despite this effort, the justice committee was still hearing oral submissions in December.

The justice committee’s report is due on February 5, 2022. Parliament will resume on February 8, 2022. It’s unclear whether the Conversion Practices Prohibition Legislation Bill will be prioritised and passed in early 2022. However, it would be a little awkward for Labour to come to Pride without fulfilling their promises to the queer community. That hasn’t stopped them in the past, but it does add pressure on Labour to act quickly in the New Year.

The ban on conversion therapy could have been fast-tracked, but it would have come at the cost of queer voices. Some on the justice committee entertained the idea of asking people to withdraw from the oral submissions, which would have required activists to ask queer people to withdraw so that the justice committee could process the submissions at a quicker pace. But the Conversion Practices Prohibition Legislation Bill was disappointing because the Ministry of Justice failed to consult queer people, and the select committee process was our only real opportunity to have our say. Our voices and stories need to inform the law, and withdrawing queer people from the oral submission process would’ve had the opposite effect. The government has not apologised for the harm it has caused to queer people through state-facilitated conversion therapy in the past. A part of healing for survivors is speaking about what happened to them. I couldn’t take that opportunity away from my community.

It is appealing to ban conversion therapy as soon as possible, but we need to get this ban right. It took more than four years to get us to this position, and once the government passes the Conversion Practices Prohibition Legislation Bill, it won’t revisit it for many years. The Labour Party did not prepare itself to enact an effective legislation to eradicate conversion therapy in their last term. After being elected to government in 2020, Labour rushed and put forward an unsatisfactory bill.

Conversion therapy will harm queer people while the ban is delayed. The government needs to pay attention to the Conversion Practices Prohibition Legislation Bill, amend it as queer people have asked and prioritise it in 2022. The Labour Party has a majority at every stage of the process to ban conversion therapy. Whatever bill we receive after the select committee process will be a result of what Labour chooses to put forward, and they need to be held accountable for it. They have a majority and a mandate. It is time for them to deliver.

Shaneel Lal is co-founder of the Conversion Therapy Action Group