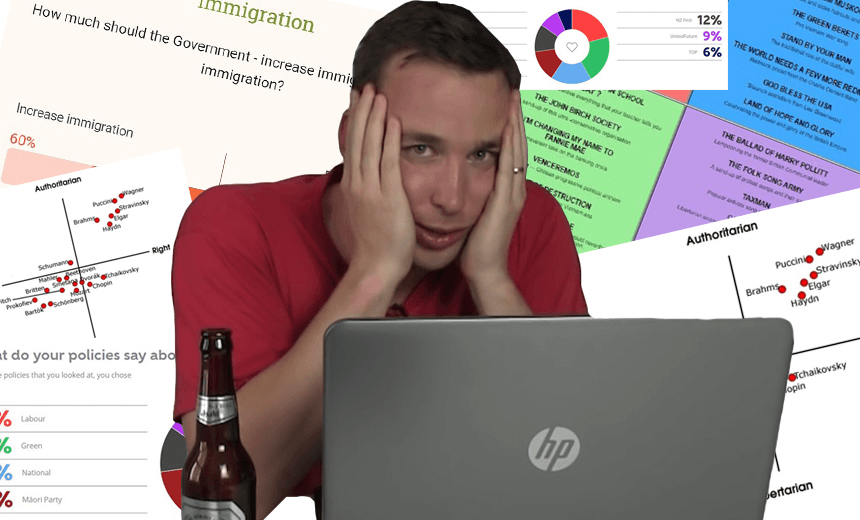 Which online political tool is best for you? Use our online tool to help you find the best online tool

Confused by all the online tools analysing which party you align with best? Don’t worry, Hayden Donnell is here to help.

With the general election only eight weeks away, New Zealand is suddenly drowning in quizzes. Everywhere you turn on the ‘net, there’s a new web exam testing your opinion on everything from Auckland housing policy to whether you want to put kids in boot camps, and aligning your answers with a political party. There’s good reason for the outbreak. One million New Zealanders didn’t vote in the last election and when polled on why, most said “because I didn’t do an online quiz telling me whether I’m a libertarian or a socialist”.

But how do you pick the internet politics tool for you when there’s such a baffling array of choices on offer? How are you meant to make a decision when the quizzes appear so uninspiring and beige, with policies that probably won’t make much of a difference to your life, and besides all that, most of them are hypocrites, liars or secret alcoholics anyway? That’s where I come in. I’m going to judge the best Internet politics tests on offer this election. And I’m going to do it via the most accurate and exacting measuring tool in the world: the power ranking.

On The Fence by Massey University and Design Democracy is innovative in that it lets you place your political positions on a non-binary sliding scale. Dragging the graph thing using your mouse is cool, fun and educational!. But the quizmasters still managed to create some weird dichotomies. For instance, do you want 60% more immigration and also 40% less immigration?

Would you like to destroy the economy or the environment?

And should we let the terrorists win 70% of the time in exchange for fewer privacy breaches?

I’m not a sage quizmaster, but surely these questions could’ve been phrased better.

ISideWith.com is an overseas service that’s crossed the Atlantic Ocean in search of some New Zealand politics to analyse. It’s an extensive examination of every possible political position a person can hold. I thought and researched more during this web exam than I have during my journalism degree and journalism career put together.

By its end, I had a PhD in political science and was able to compare and contrast the complete works of Karl Marx and Milton Friedman. I knew every single piece of legislation passed by Richard Seddon and the number of single malt whiskies drunk by Rob Muldoon in the Prime Minister’s office (14,738). Take it. It’s a lot. Of fun.

Even the legendarily unhelpful youth blog The SpinOff is getting in on the ground floor of the quiz boom, hosting POLICY in conjunction with some Wellington braniacs. This tool is really useful despite no doubt being designed on a vintage typewriter at Fidel’s.

It has a policy database that lets you mull over what’s actually on offer from various parties – a step up from quizzes that adhere to a strict “don’t ask, don’t tell” system when it comes to which policy aligns with which party.

The only problem is that it can end up giving you results like this one:

How can one person be so at war with herself? It must feel like being possessed by demons. How can she exorcise the 6% of her brain that belongs to Gareth Morgan? Please, there must be a way.

Political Compass looks like what would happen if the DOS operating system had a baby with a folk club website.

It hasn’t been updated since 2014 and still leads with a strongly worded statement on the TPPA, which used to be the most important issue in politics before “averting a Nazi nuclear holocaust” came along. There’s a “reading list” down the side on political ideologies, and a section that seemingly arbitrarily ranks where all the great classical composers sit on the political compass.

The whole thing is wonkish and weirdly obsessed with classical music – just like undecided voters. At the end, you get to see where your opinions fit in a cool square that looks like the Windows 95 logo. What more could you want in a political quiz? Sorry Spinblog, you lose.

No-one else is that objective, and that’s okay. Emotions aren’t bad. Even though they motivate Nazi hate groups to march through the streets screaming about their pubeless pelvises, they also inspire people to fight for things like fairness. Humans are social animals and politics is social. It will never be untainted by our messy tribalism, no matter how much Gareth Morgan might want us to just start acting logically and kill all the cats.

That’s why I’d like to conclude with this: a political quiz crafted with the perfect mix of emotion and policy.

Can’t see the cool quiz? Click here to find out your political destiny.

This content is entirely funded by Simplicity, New Zealand’s only non-profit fund manager, dedicated to making Kiwis wealthier in retirement. Its fees are the lowest on the market and it is 100% online, ethically invested, and fully transparent.Simplicity also donates 15% of management revenue to charity. So far, Simplicity is saving its 7,500 members $2 million annually. Switching takes two minutes.