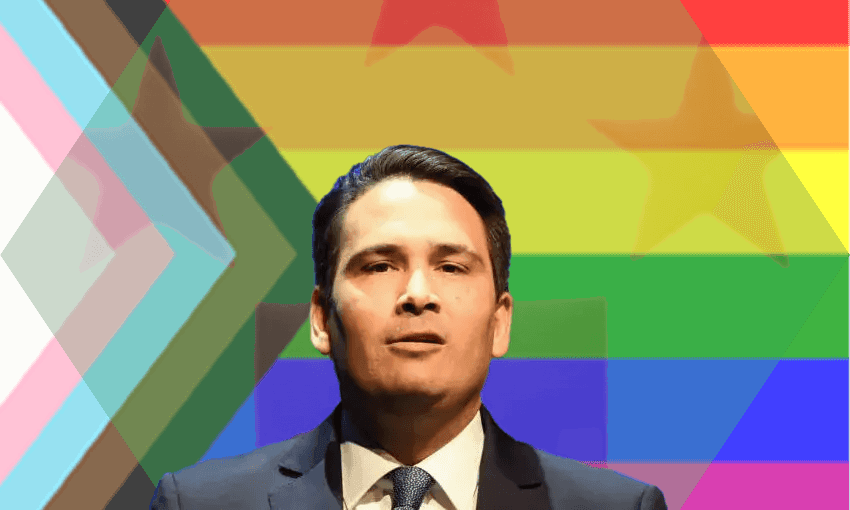 Simon Bridges has consistently voted against the rights of queer people. Why do people forget that? (Image Design: Tina Tiller)

What Simon Bridges means to me

Simon Bridges has consistently voted against the rights of queer people. Why do people forget that? (Image Design: Tina Tiller)
Opinion

On Tuesday, self-declared “regular dickhead” Simon Bridges announced that he would be leaving politics, following 14 years as a National MP. Years filled with scandal, an image rehabilitation, a book, and then some more scandal. He told media that he would be exploring commercial opportunities and a “media project or two”. The announcement was greeted with the usual mixture of tributes, fanfare, analysis and speculation that a sudden, barely explained, resignation of a high profile politician tends to inspire.

My reaction? Don’t let the Beehive doors hit you on the way out.

Simon Bridges’ departure from politics, to me, is the exit of the most prominent politician to consistently vote against the rights of queer people in my adult lifetime. He might have equivocated about his vote against marriage equality in Express magazine years later, saying that he “got it wrong” and “New Zealand has moved on”, but the ink on his vote against the conversion therapy bill is barely dry. The bill, which has now thankfully passed, bans practices that aim to change a person’s sexual orientation, gender identity or gender expression. Early last year, Bridges’ concerns were about freedom of speech, and later that same year, those concerns were expanded to include parents potentially being prosecuted due to the wording of the bill.

It truly does not matter to me what he thinks, it matters to me how he votes. Bridges voted no on the bill at all three readings, and was one of only eight MPs to vote no on it at the final reading. This voting record has been barely touched upon in the coverage since Bridges announced his resignation.

It’s also barely been touched upon since his post-coup image rehabilitation in 2020, when he went from being perceived as a beleaguered, braying leader of the opposition, against the most popular prime minister in living memory, to being a meme-friendly, personable MP who befriends yaks in his spare time.

The media at large lapped him up. I did not. Many queer people I know did not. It is very difficult to believe someone is wholesome and “just a regular dickhead” when their voting record would deny you rights, freedom and humanity. I’m not the right person to speak on his success or his value as a politician. His Gone by Lunchtime exit interview presented a charming, self-aware Bridges, so self-aware that he said, tongue barely in cheek, “It’s been amazing to shamelessly use Spinoff to set the record and my version of history straight on so many things.” (Can you imagine Todd Muller or Christopher Luxon pulling that off?)

What I can speak to are these facts: Simon Bridges voted consistently against the rights of queer people. When presented with the option to make things equitable for queer people in our society, he chose not to. So as a queer person, it has been bewildering to see Bridges’ image rehabilitation go smoothly. He’s been given the kind of media grace that Judith Collins would coup for.

It comes down to memory. Bridges was one of 44 MPs who voted against same sex marriage nearly a decade ago. I’d wager that very few people can name those 44 MPs off the top of their head, and I would also wager those very few people would be queer. It’s not the thing that he is most known for.

But nine years on from same sex marriage being legalised, Bridges was one of just eight MPs to vote against the Conversion Practices Prohibition Bill. That’s a much shorter list of names burned into the memories of queer people, and I’d hope others. I don’t throw blame at any of the coverage of Bridges, although I do wonder if the coverage would have been as pleasant or temperate were there more queer people in political reporting. It’s difficult to ask the hard questions if you’re not even in the room.

Simon Bridges was a politician who voted consistently against queer rights. That’s what I remember, and will continue to remember, as he waltzes onto the stage of Dancing with the Stars (a calculated guess). He no longer has the ability to vote against my rights or the rights of my community, and I’m glad. Fuck the yaks, remember the votes of another regular dickhead.