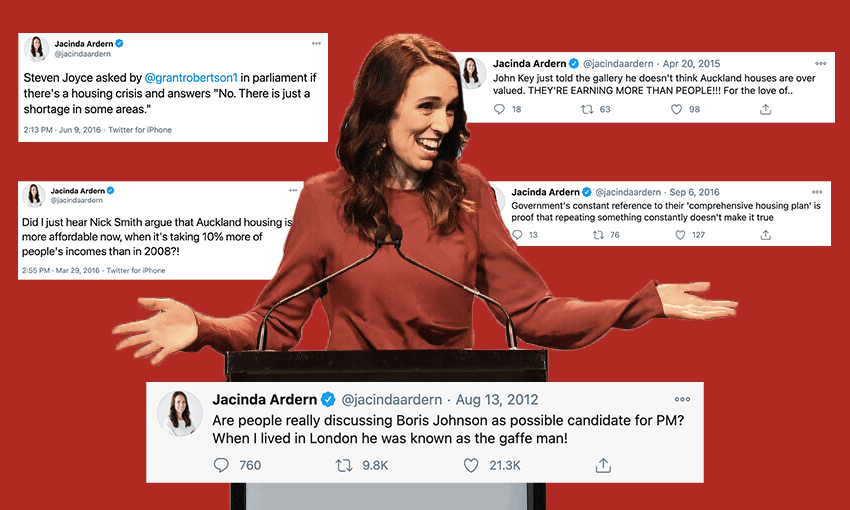 There comes a time in every successful politician’s career when their Twitter accounts are ruthlessly trawled through by a combination of political activists, bemused bystanders and, yes, bored journalists.

Somehow it’s taken three years for prime minister Jacinda Ardern to experience the same treatment. Over the past few days, Twitter has been alight with decade-old commentary by then-Labour backbencher Ardern, with many making the charge of hypocrisy in resurfacing Ardern critiques of John Key’s government for a perceived lack of action on issues like social welfare and the environment.

What’s interesting about this recent online excavation movement is that most of the tweet diggers are on the left. Not exclusively, though: David Seymour’s in on the game, too.

Labour’s constant reference to going “hard and early” is proof that repeating a lie doesn't make it true. https://t.co/mWigVVciSD

In recent days, the prime minister has also been upbraided online for the repeated “ruling out” of key issues, dating back to her decision to rule out a capital gains tax for the entirety of her tenure as New Zealand’s leader.

Just yesterday, Ardern pinned it on the entire country, saying that, in fact, “New Zealanders ruled it out”.

“We campaigned on it several times, and we just couldn’t bring New Zealanders with us,” she said.

But when it comes to her own tweet archive, here are nine posts that Jacinda Ardern might now be regretting (presented in no particular order).

Are people really discussing Boris Johnson as possible candidate for PM? When I lived in London he was known as the gaffe man!

This tweet of Ardern’s has taken on much higher significance since both she and Boris Johnson ascended to the leaders of their respective countries. It also seems to resurface in tabloid UK media at least once a year.

John Key just told the gallery he doesn't think Auckland houses are over valued. THEY'RE EARNING MORE THAN PEOPLE!!! For the love of..

In a week where the skyrocketing price of Auckland houses has made countless headlines, this 2015 tweet from Ardern seems especially pointed.

As one tweet response to this simply says, “Lol. Has not aged well”.

‘A shortage in some areas’

Steven Joyce asked by @grantrobertson1 in parliament if there's a housing crisis and answers "No. There is just a shortage in some areas."

Same as above, really. Awks.

Did I just hear Nick Smith argue that Auckland housing is more affordable now, when it's taking 10% more of people's incomes than in 2008?!

‘The future of the St James Theatre’

Still trying to get the Govt to reveal its international convention centre plans and the future of the St James Theatre http://tiny.cc/1vyna

I have still never stepped foot in Auckland’s St James Theatre. At at this stage, I expect I never will.

I know an Alan Jones. Unlike the Aussie version, he isn't a git or intensely disliked by the general population.

.@PhilTwyford points out to Bill English that @TheBlockNZ has built more houses in two seasons than his housing accord policy has in a year

Nice to see Phil Twyford get a mention six years back.