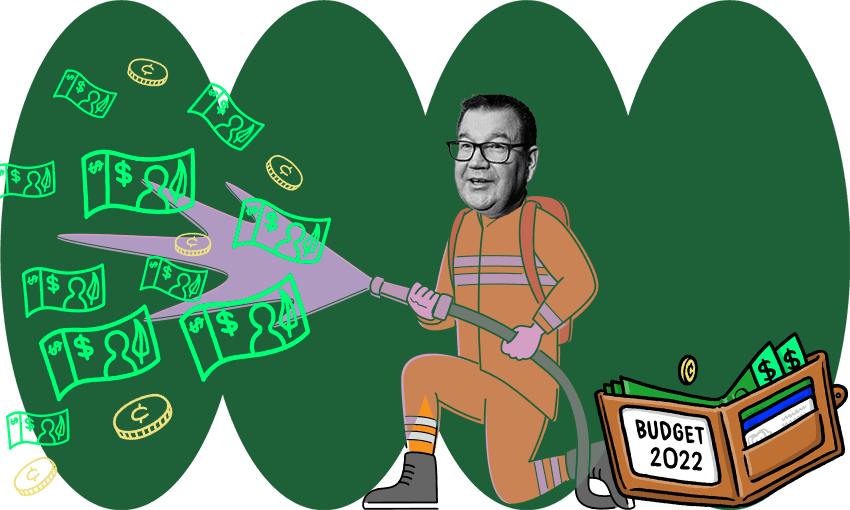 Ah, budget day! The most magical day of the year, when the finance minister enacts that scene from Fury Road. The one where Immortan Joe throws open the floodgates and rewards his wretched worshippers with torrents of fresh water. But instead of water we’re drenched in money! One hundred and twenty eight billion dollars in spending this year! It is by Grant Robertson’s hand that we will rise from the ashes of this world.

Some of us are more drenched than others. The most worthy recipients in the 2022 budget are probably the solo parents on benefits who will no longer have their child support deducted by MSD to “offset” the cost of their benefit. This policy change only costs an estimated $70 million a year; as with the public transport supplements rolled out back in March, it’s astonishing how cheap it is to help the poorest, most vulnerable people in the country.

It’s interesting that this change wasn’t foregrounded by the government, either by pre-announcing it, or including it in their top-line announcements yesterday. Last year was Labour’s “compassionate budget”, in which Robertston and Jacinda Ardern used their absolute majority to pass the reddest of red budgets, with the largest increases to welfare payments in a generation alongside massive investments in health. Back then they were proud to be increasing benefits. Now, billions of dollars later, they’ve seen most of those increases wiped out by inflation and suffered a dramatic decline in popularity. This is still a Labour budget, but it’s far more muted.

Instead the topline policy is the new cost of living payment, $350 to everyone who earns less than $70,000 but doesn’t get the winter energy payment. The government reckons that’s about two million people, and this feels like a cohort spat out by a pollsters algorithm, rather than a reflection of who genuinely needs help right now. It closely resembles National’s old “independent earner” tax credit, which they introduced in the late 2000s and scrapped a few years later, because not even John Key could justify such a blatant electoral bribe to his caucus.

Other than that there were few surprises. Huge amounts of debt moved around the health sector. The government continues to try and build houses. There’s just under three billion going into the Emissions Reduction Plan to transition us to a low carbon economy, and it’ll be many years before we know whether this is money well spent. The agriculture and forestry sectors get $710 million over the next four years. The energy sector gets a billion. and I think it’s worth comparing that to the $70 million a year to solo parents I talked about earlier. It’s a shame they can’t all club together and hire themselves a lobbyist.

But maybe buying off the worst emitters is just the grubby reality of what effective climate policy looks like. And if the dairy sector uses that money to develop genuine low carbon solutions to farming, we could export them all over the world and make a real difference to global emissions. Or maybe they’ll just take the cash, keep on polluting and furiously resist any real change. It would be nice to be pleasantly surprised on this one.

Labour began this term with unprecedented popularity and two very strong assumptions. The first was that the government should give money to people who need it. The second was that it should invest in the public sector, especially education and health. The 2021 budget was a very confident implementation of those values, but the last 12 months have called them both into question. Because if the government increases benefits and minimum wages, but that contributes to inflation, which wipes out the value of the increases, then they haven’t really helped anyone.

And the modern day public sector is very far from the one Michael Joseph Savage built, or even the walk-shorts and glide time stereotypes of the 1970s. It’s an amalgam of public and private entities: departments and ministries and commissions co-existing with law firms, consultancies, public relations companies, NGOs, corporations and other private sector providers. It’s carefully optimised to redirect vast amounts of public spending into private hands, and this is a problem this government struggles to confront. Which is why its ministers routinely find themselves being torn apart by interviewers like Corin Dann or Tova O’Brien, struggling to explain why some previously announced multi-million dollar policy has only helped a tiny handful of people, or failed to build any houses, or to translate into real-world action at all.

This budget doesn’t solve those problems. Which shouldn’t surprise us – they’re hard to solve. I’m sure it’s very clever in terms of its political positioning, buying off a large number of swing voters while presenting the government as prudent and disciplined. But, unlike last year, it’s harder to see what Labour’s project is. What are they doing with the most powerful electoral majority in our modern political history? Why do they get to laugh maniacally as they throw open the money floodgates, instead of Chris Luxon and Nicola Willis?