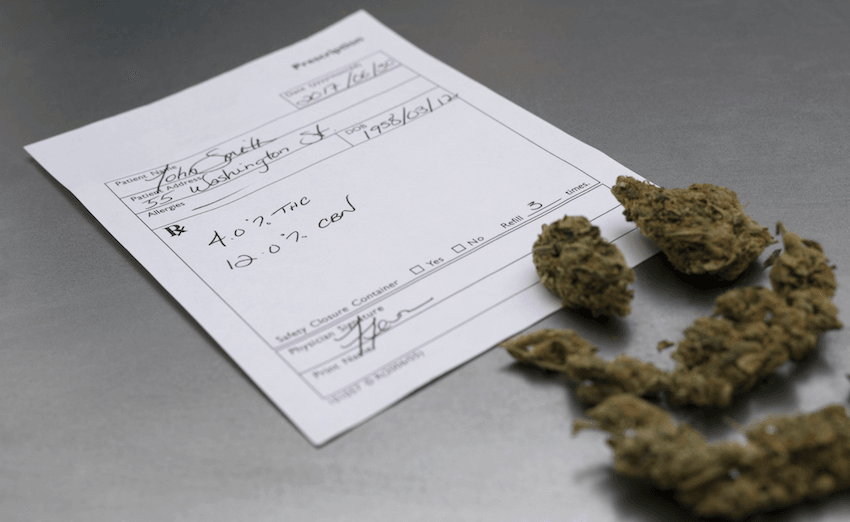 The medicinal cannabis bill filed today in the name of National’s Whangarei MP Shane Reti is vastly better-conceived than the government bill it seeks to supplant. But it’s not perfect, writes Russell Brown.

It’s no secret that members of the Health select committee were moved by many of the oral submissions they heard while considering the government’s medicinal cannabis bill. Reti, as deputy chair, was reportedly on the verge of tears after hearing from Sam Bartels about his struggle to access cannabis products for his daughters’ rare epileptic condition.

Advocates have been hoping that the submissions would be enough for the committee to extend the bill’s statutory defence for the terminally ill to those with chronic illnesses who might benefit from cannabis. No one was really expecting what happened today – National presenting its own bill, which is both more detailed and more adventurous.

So what’s it all about? Let’s start with the government’s bill, which is very modest in scope – because, we were told, it was the most Labour could get New Zealand First to agree to. Its major feature is the introduction of a statutory defence for people with terminal illnesses (defined as being likely to die within the next 12 months) to possess and use cannabis. It would also de-schedule the non-psychoactive cannabinoid cannabidiol (CBD) as a controlled drug – although that was a bit of a no-brainer given the World Health Organisation’s finding late last year that CBD “does not appear to have abuse potential or cause harm”.

The bill also creates the power to draw up regulations for domestic production of medicinal cannabis products – but, crucially, does not contain those regulations or even any meaningful guidance towards them.

Shane Reti’s bill does contain some of those regulations – for better or worse – and a good deal more besides. It’s probably easiest to start with National’s own bullet-points.

But there are a number of functionally equivalent products regarded as near-pharma-grade. As controlled drugs, they’re all subject to Regulation 22 of the Misuse of Drugs Act Regulations and technically every prescription requires ministerial approval. But last year, Associate Health minister Peter Dunne announced that Sativex could be prescribed without approval from the minister or officials.

But it appears from the text of the bill that Reti misspoke. That defines a medicinal cannabis product as simply a cannabis-based medicine “manufactured in accordance with good manufacturing practice”, aka GMP. But ministry officials have already indicated a willingness to approve products made to the less stringent Canadian GPP (Good Production Practice) standard, which would not be allowed under National’s bill as it stands. It’s a little confusing, frankly.

This makes a significant difference when it comes to cost. GMP is expensive. And unless Pharmac changes its mind on subsidising cannabis products, it would be hard to see currently prohibitive prices (up to $1000 a month for Sativex) coming down as much as National expects.

Medical practitioners will decide who should have access to a Medicinal Cannabis Card, which will certify them to buy medicinal cannabis products.

In some ways reminiscent of the Chloe Swarbrick bill that National voted en bloc to prevent from going to select committee. That also effectively required a note from the doctor, rather than a prescription. This gets around one of the major roadblocks – the unwillingness of many doctors to prescribe cannabis products. So making cannabis products available without prescription is a very big deal. The biggest deal in the whole bill. But the bill does not spell out the criteria necessary to be granted a card and National says only that these would be decided by the medical profession.

This is the difference from Swarbrick’s bill, which would have allowed a cardholder to ask any old person to grow for them, or to grow themselves.

Cultivators and manufacturers must be licenced for commercial production. Licence holders and staff will be vetted to ensure they are fit and proper persons.

Sounds good, but is really odious. The regulations contained in Reti’s bill not only forbid anyone convicted of even a very minor drug offence to own, direct or manage a medicinal cannabis business, they apply to staff too. This will simply double down on the discriminatory impact of cannabis laws on Māori and creates a major problem for the East Coast company Hikurangi Enterprises, whose kaupapa involves on providing legitimate work opportunities to people who may in the past have fallen afoul of cannabis laws. Anyone who has ever been dependent on any illicit drug without being convicted of an offence is out too. This is a really bad way to encourage people to address and seek help for drug problems.

A licensing regime that will create a safe market for medicinal cannabis products. Cultivators and manufacturers will not be able to be located within 5km of residential land, or 1km of sensitive sites such as schools and wahi tapu.

Given that cannabis can be securely grown indoors, in any old industrial estate, it seems unduly harsh to mandate it be five kilometres clear from any residential land.

No advertising of medicinal cannabis products to the public will be permitted.

The Ministry of Health will review the legislation in five years.

This is also in the government bill.

National is also making a point of emphasising that its bill in no way facilitates the non-medical use of a cannabis and to that end has specifically banned “botanical cannabis” – that is, unprocessed buds or leaf – from its proposed scheme. This seems basically for show. Medsafe was never in danger of approving any product for smoking and, to take one example, the Canadian company Cannimed sells dried, standardised cannabis plant for use in vapourisers. Medsafe has even indicated in the past that it could approve those products on the non-pharma-grade regulations.

The government bill’s statutory defence does not feature in National’s bill for the same reason – even at its most liberal, it does not want to appear soft on drugs.

Nonetheless, the party that governed for years on the promise of never, ever changing the Misuse of Drugs Act 1975 has, in Opposition, proposed easily the most consequential amendment to the act in its overlong history. It’s significant that the MP with his name on it, Shane Reti, is a doctor. It’s also significant that Reti had made time to talk to advocates.

But could this have been done differently? Could at least some of the ideas here have been added into the government bill? Apparently not. The Labour members of the committee – after hearing all those submissions – wanted to recommend that no changes be made. But National members had effectively cast their lot by that point and, frustrated by the lack of regulatory detail in the government bill, begun working on their own.

Today the Health Committee announced that its members “have been unable to reach agreement and therefore cannot recommend that the bill proceed” – which was understandably received as saying that the bill would not proceed. But committee chair Louisa Wall has confirmed that it will indeed go back to Parliament.

So perhaps it is possible that some of the elements of Reti’s bill could be incorporated in a Supplementary Order Paper. Labour could and should explore that option, swallow its pride and talk to Shane Reti.