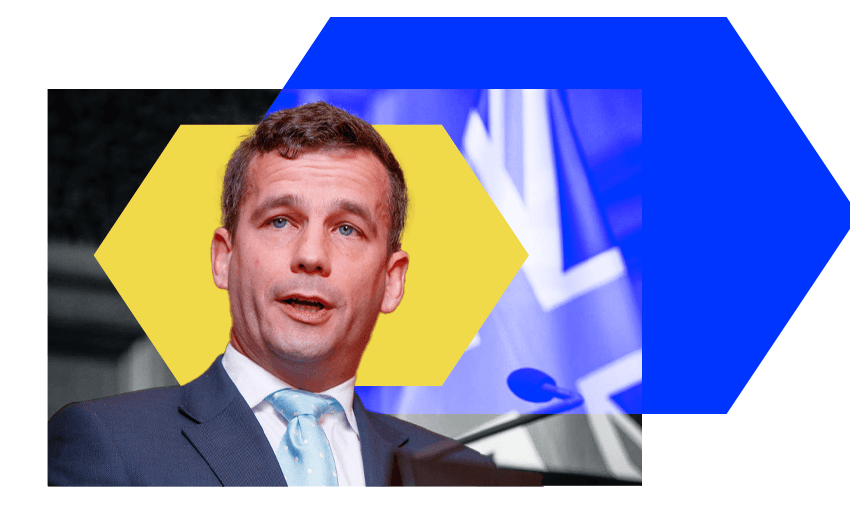 Act unveils its three-C plan for election success in 2023

The Act Party’s been filling venues as part of a cross-country policy tour. At an event yesterday, Stewart Sowman-Lund heard what the party wants on the bargaining table for next year’s election.

On the same day that the Greens were facing questions over leadership quibbles, Act MPs were addressing a crowd of roughly 600 people, a near-capacity audience at the Waterfront Theatre in downtown Auckland. It was the latest stop in what the party has dubbed the “Real Change” tour, a series of nationwide rallies aimed at putting forward the Act agenda.

According to leader David Seymour, 2,500 people have attended the events and $50,000 of tickets were sold over the past three weeks alone.

With parliament in recess, the party has chosen now as the perfect time to visit as many of its potential voters as possible while rallying the troops more than a year out from polling day. “At each meeting we heard from Kiwis who are being hammered by the cost of living crisis, who see crime getting out of control and who are watching as our democracy is threatened by co-governance,” said Seymour in a press release.

Those who braved Auckland’s icy weather yesterday appeared to lap up every word from the speakers. Those on stage seemed equally thrilled to be in front of such a large audience. Seymour himself turned around from his front row seat at one point to marvel at the packed stalls. On stage, the speakers were happy to crack jokes and revel in the spontaneous applause breaks.

Largely, the topics traversed in the speeches were those laid out by Act in its recent 100-day plan. Act, it seems, wants the next election to be about three Cs: crime, the cost of living and co-governance.

Covid, another “C” word, barely got a mention – other than Seymour’s claim New Zealanders were “tired” of hearing about the virus and repeated call for an inquiry into the pandemic response. And in the same week both Jacinda Ardern and Christopher Luxon were caught in gotcha-style “no mask” controversies, Seymour and his team of MPs were largely maskless inside the Waterfront Theatre, despite signs on the doors asking all patrons to be wearing one.

Of the three Cs, co-governance was clearly top of the agenda. It was referenced in practically all the speeches, dominating at least two. The headline speaker at the event wasn’t an MP at all, but Auckland University academic Elizabeth Rata. She’s one of the “Listener seven”, a group of academics who co-signed a letter “In Defence of Science” that was published in The Listener magazine. The letter said that “in the discovery of empirical, universal truths”, mātauranga Māori fell short of “what can be defined as science itself”, prompting widespread condemnation along with a smattering of support.

Rata described her speech as being targeted at New Zealanders of all political persuasions who were “deeply worried about New Zealand’s descent from democracy into ethnonationalism”. To rapturous applause throughout, at one point after nearly every sentence, Rata advocated for removing the Treaty of Waitangi from all legislation and said New Zealand’s education system was indoctrinating children. “This so-called decolonisation, indigenisation of the curriculum… it is a disaster,” she said.

Rata concluded her speech with this: “To those who will seek to distort my words, I support the activities of those in civil society who value and engage in Māori language and culture… Society is at its most creative when diversity is practised and enjoyed by all.”

Act has proposed a referendum on co-governance, with David Seymour telling the crowd that the principles of the Treaty of Waitangi should be defined by parliament and put to the people.

Earlier in the event, MP Karen Chhour, who is Māori, expressed concern that a Tiriti-centric society “divides” the country into tangata whenua and tangata Tiriti. “It cannot stand,” she said. In her speech, Chhour said that “the Māori Party’s narrow-minded view that we only exist as Māori and Pākehā in New Zealand is damaging and disappointing.”

She added: “When they stand and claim to speak for all Māori, I can guarantee you it’s not for Māori like me who dare to have a different view. And how do some respond to this Māori lady when she expresses a considered opinion? They resort to personal attacks… I’ve even been called a traitor to my race simply for trying to make a case for equality.”

The two parties have fired repeated salvos at one another, with each ruling out governing alongside the other. Te Pati Māori co-leader Rawiri Waititi told The Guardian he wouldn’t consider being in government with National and Act “because of the Act part of them, and the rhetoric that’s coming out of Act is emboldening racism across this country,” he said. “They’re not the Act that I remember.”

“All I see is a party that is just actively campaigning against the rights of tangata whenua,” Waititi said.

After co-governance came the second “C” of the day: the issue of crime. Act’s justice spokesperson, former gun lobbyist Nicole McKee, evoked a New Zealand of the past where children could safely play together on the street and crime was “less vicious, less destructive”.

At number three on the party’s list, McKee has been one of Act’s more visible and vocal parliamentarians during this term. To gain any visibility in a party that is often considered simply a David Seymour vehicle is impressive in itself.

In her speech, McKee called out the government for not just being “soft on crime” but also “wrong on crime”.

“This government is… more interested in policing by consent and releasing people from prison than it is in holding criminals to account,” she said. “Gang numbers are out of control and more and more Kiwis are becoming victims of crime. We hear that 10-year-olds are participating in ram raids, almost as keen to win the gangs’ approval as the Labour government is.”

On the issue of cost of living, C number three and arguably the meatiest and most pressing political issue on Act’s agenda, it was deputy leader Brooke van Velden’s turn to address the crowd. She pointed out that she is one of only two qualified economists in parliament – “and if you think that’s bad, the other one’s Trevor Mallard”.

Van Velden was a familiar face in the Act camp before her meteoric rise into the deputy role, and to a seat in parliament, in the 2020 election, when Act gained nine new MPs. She was effectively Seymour’s right-hand woman during the campaign for the End of Life Choice Bill, helping twist the arms of reluctant MPs.

Her speech reiterated several key Act talking points from recent weeks, such as the need to fast-track the immigration process for overseas nurses, can the Covid-19 isolation requirements and tackle the Gib shortage by bringing in equivalent products. She also repeated Act’s goal to “simplify” the tax system into just two rates – 17% and 28.5% – which van Velden said would make it the “cleanest and most competitive” tax system in the South Pacific.

At the start of yesterday’s event, Act’s president Tim Jago implied the party would be prepared to bypass the “baubles of office” in order to progress its policy plan. With a number of demands, some that National has rejected, that may seem to rule out a functioning coalition. Or, it could mean National making more concessions than it would currently like to should it hold the balance of power in about 15 months’ time. Act has jumped the political gun on agenda-setting for next year, beating National to many of the issues that will inevitably dominate 2023.

And based on the turnout and reception in Auckland yesterday, National may need to up its game if it wants to have a good hold on the negotiating strings.

Clarification: This post has been amended to state that the letter by the “Listener seven” said mātauranga Māori fell short of what can be defined as science itself specifically “in the discovery of empirical, universal truths”.