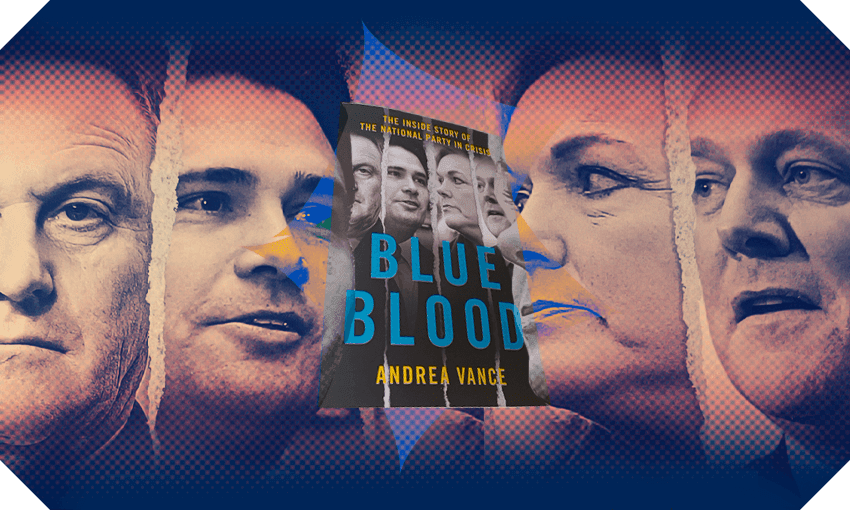 ‘We didn’t know how nasty it got’: Andrea Vance on National’s long nightmare

The political reporter’s new book Blue Blood, the story of the National Party’s post-Key years, includes many details not previously reported. In a special episode of The Spinoff’s political podcast Gone By Lunchtime she talks to Toby Manhire about the book, its revelations, and Luxon’s challenge.

Shortly after Christopher Luxon became leader of the National Party, MPs stopped talking to Andrea Vance. She soon learned there had been a “gagging order”. It was disappointing for the journalist – an interview with former leader Todd Muller was scrapped, for example – but no big deal: Vance already had the bulk of the material she needed for her book, Blue Blood: The Inside Story of the National Party in Crisis, in the bag. In fact, she’d written most of it. But it did confirm something about the arc of the story. The party had itself begun a fresh chapter. “The discipline has been instilled now,” Vance told Spinoff podcast Gone By Lunchtime. “They’ve moved into a new phase … I was really lucky with the timing.”

As well as dozens of long interviews, she had gotten hold of the motherlode: the internal review of the National Party’s calamitous 2020 election defeat. The document had been closely guarded by then leader Judith Collins; copies were provided only to the nine board members, with MPs required to procede into the caucus room and read in situ, as if it were a precious text at the Turnbull Library. “We do not give our opponents ammunition,” said Collins.

The review did not mince words. “The genesis of the many issues faced by the party in the last term stem fundamentally from poor leadership and resulting bad culture and actions by bad actors which were often not called out early,” it found, as excerpted in the book that promises “the full story of how the National Party went to war with itself”.

Across the three years to the election, “accounts of chat-groups, factions, undermining and resulting poor behaviour were prolific”, and: “The abhorrent acts of bad actor individuals with disunity, undermining and ongoing information leaks plagued the 2017–2020 term.”

A parliamentary term that saw Jami-Lee Ross self-immolate in his effort to destroy Simon Bridges, and then a coup to install Todd Muller in Bridges’ place, revealed “a toxic culture of bullying, mistrust, disunity and undermining within caucus”.

The origins of the bloodletting, they found, was in the dissolution of the formidable senior team led by John Key, and an inability to accept that despite being the party with the most votes, National had lost the 2017 election. “Resentment,” the reviewers wrote, “pervaded their approach to opposition.”

The document came into Vance’s possession when she was midway through the manuscript, and “matched the picture I was building”, she said. “The review basically is the book. It points to all the things that went wrong from the English-Joyce tight team and the frustrations that built up, and the ambitions that bubbled to the surface that destabilised English and later the whole party.”

Blue Blood traverses five wretched years unflinchingly but without any sense of delight. John Key, one of many former MPs who spoke to Vance, explains his decision to leave rather than pursue a fourth term as prime minister. The English years and the battle for the leadership that followed his departure are detailed, as is the lead-up to Bridges’ clashes with Ross and his battle with leaks. Even a ban on phones in caucus, according to one detail provided to Vance, proved insufficient, with MPs suspected of having resorted to their Apple watches.

Bridges was ultimately snookered by Muller – whose lack of suitability was immediately obvious in his heading home at 8pm on the day he took on the leadership, and reported indifference to the details of his first reshuffle. The 53 days of Muller were made worse, according to one unnamed staffer, by the “volatile relationship” of deputy leader Nikki Kaye and Muller’s old friend and strategist Matthew Hooton – they “clashed like fuckery”. Then there was the Covid patient information leaked by Hamish Walker, who’d got the material from former party president Michelle Boag, dubbed by one staffer “a clusterfuck of biblical proportions”. Muller’s own account of his time as leader as he melted under incredible pressure, said Vance, is “absolutely heartbreaking”.

MPs turned at last to Judith Collins. Hers was a can’t-win electoral campaign, but it was nevertheless a disaster, beset by the humiliating scenes of Ponsonby Road walkabouts, literal prayers and a devastating leaked memo from Denise Lee to Judith Collins that the leader judged “a body blow to the National Party”.

Blue Blood continues through Collins’ leadership after the election: the Andrew Falloon incident, Collins’ ill-judged attack on Siouxsie Wiles and her attempt to destroy a resurgent Simon Bridges – a gambit which backfired, and saw her lose a no-confidence vote, with Bridges at the 11th hour coming to an arrangement with Christopher Luxon that would see the political newcomer and John Key protege take the reins.

Ugly though it looked in real time, that was only the half of it, said Vance. “We didn’t know on the outside how nasty it got. There were hints of it, but they managed to keep it under wraps.”

Apart from the many on-the-record interviews, the book is replete with recollections from unnamed MPs and staffers. That’s where the most colourful language stems from: the suspicions around a trio of “smart-arse” staffers thought to be leaking who were dubbed “the ratfuckers”; the description of the National 2017 intake and their “boozy bitching sessions”; and the Greek-tragedy wails of the very worst moments. Such as one staffer on seeing Falloon head to Collins’ office; “I thought: ‘Ah fuck, here we go.’ And it was like that just about every day. You’d think it can’t get any worse. And then it did.”

For many of those who spoke to her for the book, the interview process seemed cathartic, Vance said. “Afterwards they’d go, ‘ah’,” she said, stretching her arms, “‘I feel better!’ They were just ready to talk and [say] ‘this bloody awful thing happened to me.’”

As for Luxon, and his quest to staunch the bleeding and repair National’s fortunes, the polling signals extraordinary progress. He wouldn’t be interviewed for Blue Blood, either. “I’m yet to work out who he is,” said Vance, “and what that means for the future of the party. I’ll have to do another book … but it’s definitely better than it has been since 2017.”

Blue Blood: The Inside Story of the National Party in Crisis by Andrea Vance (Harper Collins, $35) is available from Unity Books Auckland and Wellington.