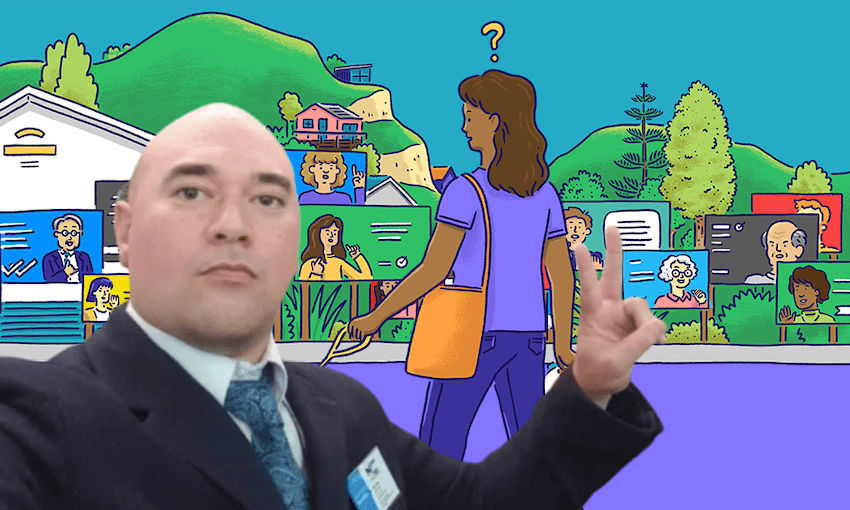 The political party has accused the Policy election information website of inaccurately presenting its views to the voting public.

The New Conservative party has accused election-information website Policy of misrepresenting its views. In social media videos and posts published over the weekend, the party attacked Policy.nz, saying it showed bias in the way it presented New Conservative policies. The party also took aim at The Spinoff, a partner of Policy, saying The Spinoff’s goal is to “rile people up”.

Prior to New Conservative’s attack on Policy, a number of posts had appeared on social media criticising the party’s policies, with screenshots of its listings on the Policy website attached. Statistics provided by Policy show the New Conservative party page has been viewed three times as many times as the next-most viewed party page, which is Labour’s.

New Conservative is particularly unhappy with the way its policies regarding Te Ao Māori have been portrayed by Policy. Regarding Policy’s summary of New Conservative views on the subject – a summary that has prompted significant criticism on social media – “whoever wrote that made a good narrative that we’re against te reo culture, and te reo Māori,” New Conservative deputy leader Elliot Ikilei told The Spinoff.

On New Conservative’s own website, the party’s te reo policy is described as to “protect and fund the teaching of Māori language and culture making it readily available, but not compulsory”. The party also believes that both the Māori electorates and Waitangi Tribunal should be disestablished, and that references to the principles of the Treaty of Waitangi should be removed from legislation.

It has since been amended to say “Oppose compulsory teaching of te reo Māori and Māori culture”.

The differences are subtle, but Ikilei said they are significant. He conceded that the party does believe there should be no compulsory te reo teaching, but said that as te reo is not currently a compulsory subject, it is wrong to use the active verb “end” to headline the party’s policy. He said as a result, its listing is inaccurate.

Policy’s Ollie Neas said this specific concern had not previously been raised with them, and as such they had assessed and changed the listing. “We had interpreted the policy to relate to the various ways in which Māori culture and language is incorporated in schooling currently. However, the comments you reported indicate the party’s stance is limited to whether te reo Māori should be a compulsory subject, which is not the status quo. We consider this to be a new public clarification by the party, warranting an update to the policy summary.”

In response, Policy’s Ollie Neas said the presentation of policies on the website is aimed at “cutting through the spin, to figure out what the actual concrete change that is proposed, either explicitly or implicitly”. He said that process involves sorting through publicly available policy documents to distinguish “why information” (what the ideas underpinning the policy are) and “how information” (the detail of how it would be done).

“From that we pick out what we call a policy statement – the core concrete action where one is available of what the party actually proposes to do. For consistency, we start those stylistically with a verb. We try and pick a verb that – from an assessment of the policy document and the political context – accurately reflects what the party wants to do.”

Neas said it isn’t unusual for the language used on Policy to therefore not match the language that a party would itself use to describe its policies. “One reason is that we’re trying to communicate it in simple, clear language. And also to improve accessibility with parties. So we’ll look at what language we used for another party summary, and what verb will convey the difference, when there is a difference.

“The policy summaries are based on publicly available information, so those are summarised without consultation with the parties. And that’s important because it’s about what these documents say to a reasonable person, what is being proposed here, not what the parties have in their heads.”

He said policy statements on the Policy website alone aren’t meant to convey every bit of information about a party or its ideas, but that clicking on the policy statement provides more of the elaboration and context a prospective voter might require.

Ikilei also noted that a correction had been made to the party’s bio on Policy regarding the issue of same-sex marriage. New Conservative has no policy at all on the matter, Ikilei said, as it considers it a lost cause for people of socially conservative views, and thus it was incorrect to say the party opposed same-sex marriage. Neas said that while the party had campaigned on the issue in the past, Policy accepted that it was no longer an area the party took an interest in and had thus removed the reference.

Neas said that Policy takes accusations of bias very seriously. He categorically rejected Ikilei’s claim about Policy’s “ideological positioning”. The site, said Neas, “doesn’t have a stake in the game” when it comes to electoral outcomes. “It’s important that it’s fair and accurate,” he said.

Asked whether pumping up the controversy over Policy’s portrayal of New Conservative policies was an electoral strategy, Ikilei said only that “every attack that we have received gives us an opportunity to correct it, and show that we’re the only party that stands for equality”.

Note: This article was update at 5.30pm to reflect a change in the listing about New Conservative’s Te Reo Māori in schools policy