Welcome to The Spinoff’s live updates for July 28, bringing you the latest news updated throughout the day. Get in touch at stewart@thespinoff.co.nz

New Zealand has moved up the medal table today after winning a silver in the rowing, with the All Blacks Sevens guaranteed a medal after securing a spot in tonight’s final.

Here are some of tonight’s Olympic viewing highlights:

$20 an hour has been offered to someone willing to refresh the managed isolation booking website to try secure a room.

It’s the latest evidence that snapping up a spot in managed isolation has become an increasingly difficult task.

The role, listed on Student Job Search, has been described as an “MIQ Booking Assistant”. Potential applicants are expected to be “trustworthy” and capable of refreshing the MIQ website in order to book a room for someone’s parents. According to the ad, the task is expected to take between 30 and 48 hours to book a slot – although it’s actually advertised as a 30 hour per week position.

“This is to be taken in allotted shifts of time, to be organised,” the listing said. “We need someone with attention for detail who can be extremely quick at clicking through the screen, spotting the date & Captchas.” 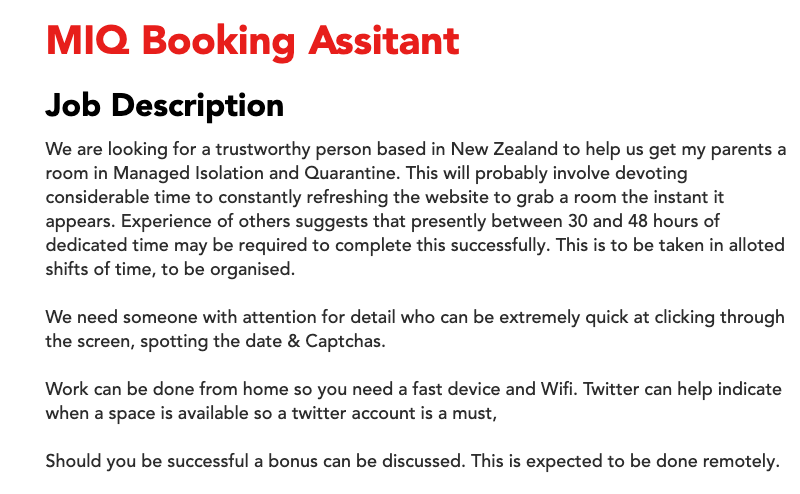 The successful applicant is required to have a Twitter account and work from home. A “bonus” is negotiable if the person is successful in booking a slot.

This isn’t the first example of someone trying to game the MIQ booking system. Recent media reports suggested computer code was being used to book a spot quicker than humanly possible. Earlier this month, it was revealed an Auckland mum was paying someone in Bangladesh to book an MIQ spot for her.

When approached, a spokesperson for the Covid-19 response minister directed The Spinoff to MBIE.

Today marked the start of bookings opening for those in group four of the rollout. People over the age of 60 should soon receive an invitation to book their jab, Ardern said. The online tool – bookmyvaccine – is now open for bookings. People in group three who have not yet been vaccinated are encouraged to book online or contact the vaccine helpline.

“We are not out of the woods yet. For the vaccine to be as effective as possible we need everybody to have it,” said Ardern.

While all those over 60 were now eligible for a vaccine, Ardern said geography may determine how quickly people could get a booking.

Asked to rate the nationwide vaccine rollout, Ardern said it was exactly where it should be. “You can see those numbers – 38,000 vaccines in one day – really are starting to pick up pace.”

There are no new community cases of Covid-19 in New Zealand with one reported in managed isolation. Ten previously reported cases have now recovered, dropping our active case number down to 43.

Meanwhile, no further Covid-19 cases have been reported in New Plymouth after ongoing wastewater testing. Two samples last week returned confirmed Covid-19 cases, but there has since been no evidence of any active cases in the community.

As of midnight last night, 1,759,154 doses of the Pfizer vaccination have been administered – an increase of more than 206,100 doses on this time last week.

Within that, nearly 700,000 people have now received their second doses, which means they’re fully vaccinated.

Yesterday, more than 38,600 doses were administered nationally. The overall vaccine rollout is tracking around 3% ahead of schedule.

It follows a bronze for triathlete Hayden Wilde on Monday.

Hannah Osborne and Brooke Donoghue SILVER Medal in Final A with a time of 6:44.82 in the Double Scull Women #EARNTHEFERN 🌿 #TOKYO2020 @RowingNZ

A group of Auckland University academics have faced widespread backlash after claiming indigenous science “is not science”.

The seven professors signed a letter published in the Listener magazine, written in response to proposed changes to the school curriculum that could see mātauranga Māori taught on equal footing to “western” knowledge.

Part of the letter, as reported by the Herald, said that indigenous knowledge “falls far short of what we can define as science” but could help contribute to an understanding of the world.

Auckland University’s vice-chancellor Dawn Freshwater told staff in an email that while the academics were entitled to their opinion, it did not represent the university’s view. She admitted it had caused “considerable hurt and dismay” among staff and students.

The NZ Association of Scientists was also “dismayed” by the letter. In a statement, the association said the validity of mātauranga had been  established by “numerous” recent publications. “There are a myriad of urgent scientific issues facing us right now where mātauranga is a vital part of the solution, such as climate change adaptation and managing ecosystems in Aotearoa, including freshwater and marine resources,” the statement read.

“It has been incredibly exciting over the past few years to see mātauranga acknowledged and highlighted in these areas.”

Science has an “ongoing history” of colonising, the association said, by speaking over indigenous voices and ignoring indigenous perspectives.

“The NZAS considers it highly valuable for science education in this country to include teaching the history of science and understanding how Western views of science have related in the past (and sometimes present) to mātauranga Māori and other Indigenous knowledges.”

A new nationwide “action plan” aims to eradicate hepatitis C in New Zealand within a decade. About 45,000 have the illness in New Zealand, with those who go untreated often developing liver cancer.

Associate health minister Ayesha Verrall said hepatitis C is the main driver of liver transplants in the country. “At the same time, many of those with hepatitis C are from our most marginalised communities, and face significant barriers to getting tested and treated – including stigma around the virus,” she said.

But, Verrall said, the illness is “preventable and curable”.

The new action plan will include an awareness campaign, increasing uptake of and access to testing, and developing a surveillance system to get diagnosed cases the treatment they need.

“The action plan is the culmination of a major collaborative effort by a group of experts from across the health system,” Verrall said. “Crucially, this has included NGOs, frontline workers and community representatives with valuable insights into how best to reach those living with hepatitis C.”

10.30am: Some Lorde for your Wednesday

Lorde is on an American press blitz at the moment and I feel like it’s my duty to share the highlights. Enjoy!

No more medals to report overnight but some positive results for New Zealand ahead of another day of competition.

Some results from last night:

A few of today’s highlights:

Check out the full rundown here.

8.05am: ‘Vaccination is the key to our freedom’ – Sydney faces another month of lockdown

Sydney is set to face another month of lockdown after a record number of new Covid-19 cases were confirmed yesterday.

According to The Guardian, New South Wales reported 172 Covid-19 cases compared with 145 a day earlier. Scarily, at least 60 of those were infectious while in the community. Another two deaths were also reported, both women in their 80s who had not been vaccinated.

The announcement comes after thousands marched Sydney’s streets over the weekend, protesting against lockdown.

New South Wales state premier Gladys Berejiklian issued a plea to get the jab. “Vaccination is the key to our freedom,” she said. “Getting jabs in arms is a key part of our strategy. I want August to be the month where everyone comes forward to get the jab. That is key to us being able to see what September looks like.

“I don’t think anyone can deny that the vaccination rate is absolutely key to how we live life in NSW.”

Despite the lockdown being extended, the Daily Telegraph has reported that restrictions will not be tightened.

Meanwhile, restrictions have today lifted in both Victoria and South Australia after smaller outbreaks of the delta variant.

7.30pm: Top stories from The Bulletin

Groundwater in Canterbury appears to be increasingly unhealthy from the presence of nitrates, a consequence in part of intensive dairy farming. Stuff’s Amber Allott reports that while a survey of more than 300 wells found the average nitrate level was below international standards, 13 wells in the Ashburton area alone were above those international standards. On a limited base of data, just under half of wells had increasing concentrations of nitrate. There are also questions around those standards in the first place, and whether they’re set too high to start with.

What are the effects of nitrates?Radio NZ’s Farah Hancock had a piece unpacking this with experts around the start of the year, and if high nitrate concentrations are in drinking water it’s a real worry. The current standards are set around avoiding “blue baby syndrome”, which is fatal and as bad as it sounds. But even at lower concentrations, nitrates have been linked with higher rates of bowel cancer, which is unusually prevalent in dairy-heavy Canterbury and Southland. A Waikato version of that story was published more recently by LDR Andy Campbell. And as Dr Mike Joy and Dr Michael Baker wrote in 2019, high nitrate concentrations also have an impact on ecosystem health.

High nitrate levels don’t necessarily have to be an outcome of farming – it’s more a question of the fertiliser used. Greenpeace campaigner Steve Abel recently pointed the finger at the companies Ravensdown and Ballance, who supply the vast majority of synthetic fertiliser in NZ. 1News had a piece on the fallout from that claim, with the companies stressing that a ban on synthetic nitrogen would do immense economic damage. It should also be noted that farming industry lobby groups are aware of the issue and trying to address it. Dairy NZ boss Tim Mackle said an immense amount of research is currently going into solving nitrogen loss.

Further wastewater testing in New Plymouth has found no additional evidence of Covid-19, reports our live updates. There are also no reports of community cases. However, testing rates remain fairly low across the region. And the local iwi Ngati Ruanui put a release out yesterday morning wondering why New Plymouth wastewater was being tested, but not that of places like Pātea or Hāwera. On Covidy stuff generally, Justin Giovannetti’s piece this morning about how some countries are getting ahead of the need to do mass vaccination is worth a read.