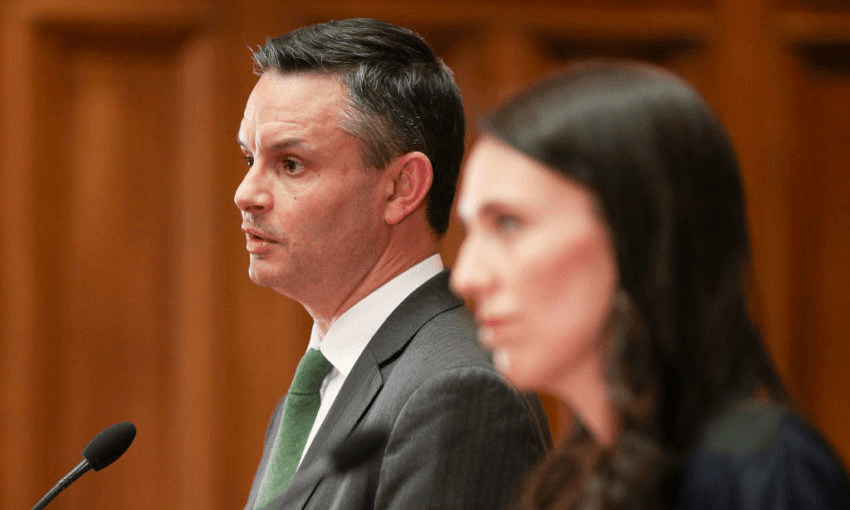 Last week it looked like fees for managed isolation were going to cover nearly all returnees. Now it looks as though the formula is very different. Political editor Justin Giovannetti explains

After over a week of debate in the parties of government and in public, the prime minister has said she’s expecting an imminent announcement on which returning New Zealanders will face a bill for their stay in managed isolation or quarantine under Covid-19 measures.

After some speculation that Jacinda Ardern could need the support of the National Party to get required legislation through parliament, after the Greens declared their opposition to proposed charges, it now appears that a deal may have been struck.

Support from the Green Party suggests that the option now on the table is a substantially more limited scheme than the across-the-board fees being mulled by Ardern last week. If the Greens get their way, most returnees will be spared a hefty co-pay.

James Shaw, the Greens co-leader, was adamant yesterday that his party won’t support fees for people coming home after living and working overseas. Instead, he’d only support mandatory payments of around $3,000 for those who leave the country now for business trips or travel.

“We would consider certain circumstances, but for the vast majority of people who are stuck overseas we just think it’s unacceptable,” he said of charging fees.

The question around charging fees should be one of money, according to Shaw. The government has estimated the price of housing returnees for 14 days while providing them with food, security and medical supervision at about $6,500 per person.

“It’s about the public health response. This is a measure designed to keep us all safe, including New Zealanders overseas,” said Shaw. “It’s just one of the costs of having to face the pandemic.”

When the idea of border fees first came up over a month ago Ardern had seemed to favour a narrower scheme. However her public message changed after the National Party unveiled plans to charge almost all returning New Zealanders fees to return. Even deportees from Australia wouldn’t be spared under the opposition’s plan.

National said it would begin charging $3,000 per adult returnee in early October. Partners would be charged $1,000 and children $500. The government’s head of border facilities said at the time that Labour and the opposition were essentially in agreement over the fees.

Ardern said last week that her party was looking to balance the right to return to the country with the need for equality in the government’s Covid-19 response. But yesterday the prime minister’s stance seemed to have softened into something closer to her initial position. She added that the details for the programme will be announced “very, very soon”.

“There are different circumstances and I do think that there is some sympathy for New Zealanders who have lived and worked overseas, who find themselves caught up in this pandemic and who through no fault of their own are having to find themselves returning,” Ardern told reporters at parliament.

She said the change in her position is “not inconsistent with what I’ve been saying consistently”. However, last week she said that the fees were about creating equality between local New Zealanders and returnees. It was a question of fairness.

Yesterday, she said fees are a reflection that some people might choose to leave the country in the middle of a global pandemic and should pay. Not a question of fairness any more, but a charge for making a poor decision. Ardern has been clear, in the past and now, that people shouldn’t be leaving New Zealand during Covid-19 if they intend to return.

National leader Judith Collins said she’d like to see the details of the government’s planned bill and would support a programme of wide fees. The border charges need broad cross-party support, she said.

“There’s not a lot of tolerance out in places like Papakura, my electorate, for people to take extended overseas holidays and that we all get to pay the cost for quarantine.”

However, Ardern said that she didn’t expect she’d need National’s support to pass a bill in the coming days before parliament is dissolved for the general election.

The government has yet to reveal whether fees will come into place quickly or wait until October, as National had suggested.

Megan Woods, the minister in charge of quarantine and managed isolation, said she wasn’t concerned that there would be a rush for the border when fees are introduced. That’s because the government has worked with the airlines to limit how many people can come to New Zealand.

Air New Zealand isn’t selling new international tickets until mid August and seats are only being sold when space is available at one of the border facilities. The country’s facilities are now less than half full, with the government preparing for an influx of returnees next week.

“Over the next 14-day period we’ll have 7,053 people at its peak in the managed isolation system and that matches our capacity,” said Woods. She said the airlines were given the capacity and sold all the tickets to fill it.