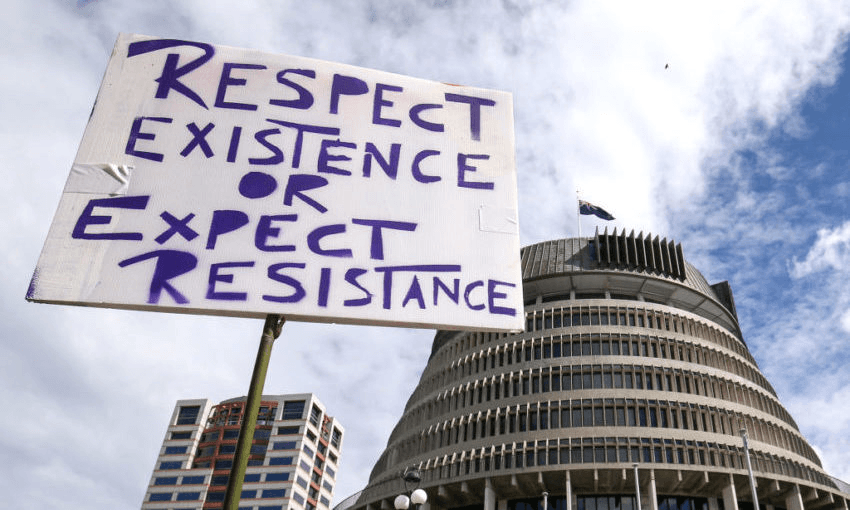 The climate strike smashed it for scale. But is it all too … polite?

The groundswell of protesters across NZ on Friday is cause for optimism. But if results don’t follow, the calls for more direct action that confronts the status quo will grow, writes Peter McKenzie.

Half an hour after the #SchoolStrike4Climate marchers began arriving at parliament, organisers got worried. Two young student coordinators, in pink high-vis vests, grabbed megaphones and began pleading with marchers to move “towards the sea”. With the tail of the march still snaking along Lambton Quay, it wasn’t clear that everyone would fit onto the grounds of parliament.

There were estimates of 5,000 marchers in Christchurch, 40,000 in Wellington, 80,000 in Auckland, and smatterings in the rest of the country. In total, the #SchoolStrike4Climate organisers said they’d received credible reports of 170,000 New Zealanders marching to call for stronger climate action – 3.5% of the country.

And for protest organisers, 3.5% is a magic number.

In 2011, Erica Chenoweth, then a little-known political scientist at the University of Denver, wrote a blockbuster book which showed that nonviolent protest movements which can get 3.5% of the population to actively participate are practically assured to succeed. According to Chenoweth, in her research “there weren’t any campaigns that had failed after they had achieved 3.5% participation during a peak event.”

Since Chenoweth’s book came out, protest organisers around the world have been laser focused on hitting that 3.5% number. Of course, very few do. So for #SS4C to have done so is a huge achievement.

But it’s not a guarantee of success. That’s because #SS4C is different to many of the protest movements which Chenoweth studied. The examples which Chenoweth draws on in her writing were not just nonviolent and widespread, but disobedient and challenging. The consumer boycotts of black South Africans (which caused an economic crisis and partly led to the collapse of apartheid) required black South Africans to make costly personal choices.

The civil rights movement in America required protesters to participate in sweeping and systematic civil disobedience; to face down police dogs and risk being arrested for occupying the streets. Gandhi’s Indian independence movement relied on satyagraha (non-violent civil disobedience): the boycott of British goods, the defiance of British laws and taxes, and non-violent resistance to British and Indian police officers.

#SS4C takes a different approach. Far from trying to break down the system, their protests take place in cooperation with the system. Streets were closed ahead of time. Police officers were there to redirect traffic. MPs were there to make speeches and to demonstrate in solidarity. The #SS4C march was a way for tens of thousands of people to show unity and express dissatisfaction with the status quo. It did not demand a lot from participants, nor was it a way of forcing immediate political action.

That doesn’t mean #SS4C isn’t having an impact. As a youth-led, youth-centric movement uniting tens of thousands of young people, it has been radically successful at inspiring young New Zealanders.

Countless young New Zealanders are suffering from “eco-anxiety”, which an American Psychological Association paper chillingly described as “”watching the slow and seemingly irrevocable impacts of climate change unfold, and worrying about the future for oneself, children, and later generations”.

#SS4C’s work has shown how widespread those concerns are, and how many people want to do something about it. As one activist at the march said, “This is the first time I’ve felt hope in a long time.” Many of these young people, whether they are long-time climate organisers or new arrivals to the movement, will become increasingly committed to climate action as a result of their involvement with #SS4C. In other words, #SS4C is creating an army of inspired, energised climate activists.

Nevertheless, at the moment it is unclear whether #SS4C is quite what Chenoweth envisioned when she wrote of 3.5% of the population “actively participating” in non-violent protest. Other environmental movements have more explicitly modelled themselves off of Chenoweth’s model. Extinction Rebellion, the main environmental mass-movement in the United Kingdom, is centred entirely on “nonviolent direct action”. It has closed down city streets and public places and filled them with major concerts and art exhibitions. At protests earlier this year, which brought London to a standstill for two weeks, over a thousand participants were arrested. Extinction Rebellion’s members have glued themselves to underground trains and held funerals at London Fashion Week. They are deliberately provocative and explicitly inconvenient – they want to force decision-makers to respond.

At the moment, #SS4C is uninterested in the nonviolent direct action (NVDA) approach of Extinction Rebellion. Part of the reason NVDA is unappealing is simply because “there’s a chance that you’ll be arrested”, Sophie Handford, #SS4C’s national convener, tells me over a patchy phone line, as members of the group celebrated in the background. “Some people are not necessarily willing, or for other reasons, they just aren’t keen to put themselves in that position.”

In the lead-up to the marches on Friday, #SS4C was particularly focused on engaging people of colour in the movement. Their protests across the country were co-hosted with the environmental group Pacific Climate Warriors, and featured Pasifika performances and speakers.

That emphasis is a big part of why #SS4C avoided NVDA. Molly Doyle, one of the main #SS4C organisers, explained the approach this way: “As much as NVDA examples that we need faster, direct action now, it is something that’s not acceptable for a lot of people. Therefore it’s excluding minorities, and heaps of people can’t be taken along on this journey. To make actual, societal change, you need everyone.”

But inside the broader environmental movement, people are getting more and more impatient. Recent reports by the Intergovernmental Panel on Climate Change have said humanity has barely a decade to slash its greenhouse emissions before radical climate impacts are locked in. Environmental activists are wary that humanity will start to feel severe climate impacts sooner than that. Doyle emphasises that “We’ve only really got three years to take immediate action before we start seeing really significant effects of climate”.

Consequently, the debate between gentler protest movements with widespread appeal and confrontational movements with more limited membership is far from abstract. Determining which is more effective and devoting the environmental movement’s focus accordingly could be instrumental in the climate fight.

For the moment, #SS4C is planning to continue with its current approach and pursue change from within the existing system. Handford explains that “in the next couple of weeks and coming months [we’ll] hopefully organise meetings with those politicians and follow up on their response to the Strike, to ensure that they are taking on our messages and our demands.” That an estimated 170,000 New Zealanders marched in the streets, Doyle says, “gives us such leverage to work with all the [MPs] who actually want to actively make a change, [and also to] make a change in all of our own lives.”

Essentially #SS4C is trying to nudge individuals into changing their habits and coax our politicians into behaving. For a movement full of people who are stridently dissatisfied with the status quo, that demonstrates remarkable and ironic optimism – predicated on a belief that our current political system is capable of the change necessary to satisfactorily address the climate crisis.

With 3.5% of the population behind them – and with the real prospect of more at future protests – #SS4C’s approach could work. But if it doesn’t start to do so quickly, that optimism will fade. And in its place will grow a more confrontational approach, in line with Chenoweth’s vision, which our status quo will find far harder to absorb.