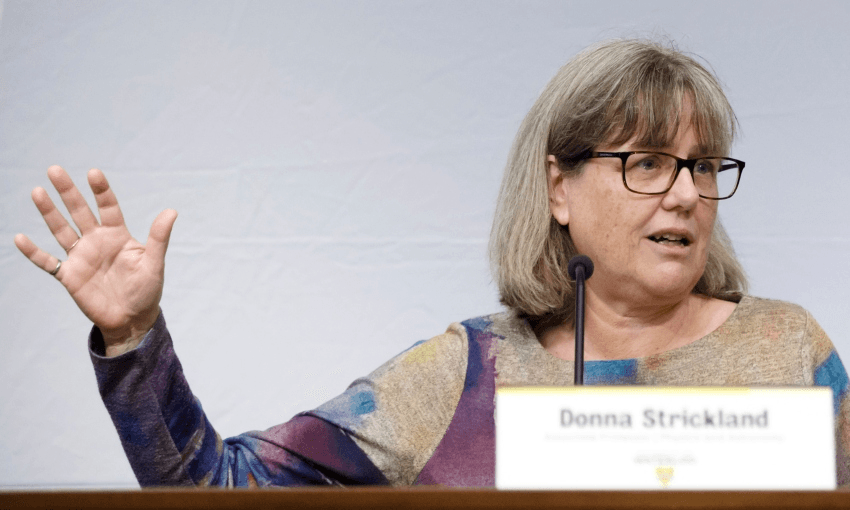 Professor Donna Strickland – good enough for a Nobel Prize, but not a wikipedia page? (Getty Images)

Why is Wikipedia biased against women? And can it be changed?

By Kelly and Anna Pendergrast
Guest writer
Made possible by

Professor Donna Strickland – good enough for a Nobel Prize, but not a wikipedia page? (Getty Images)

Last week Wikipedia hit the headlines after it was reported that Nobel Prize-winning physicist Donna Strickland didn’t have her own page until after her win. Authors and organisers Anna and Kelly Pendergrast delve into Wikipedia’s gender troubles, and tell us what we can do about it.

Wikipedia is one of those websites that has woven itself into the fabric of our everyday lives. It’s the world’s largest encyclopedia and fifth most visited website with over 5.3 billion monthly visits. The English version alone has over 5.7 million articles. At this point, it’s hard to remember a time when you couldn’t look up “Subcomandante Marcos” or “Scientology Sea Org” at 11:30pm only to emerge from the Wiki-rabbit hole four hours later. Heck, even most high school teachers have finally lifted their bans on Wikipedia as a starting point for student research. Maybe they’re just acknowledging the obvious: Wikipedia helps shape what we know about the world and the people in it.

But Wikipedia, to put it bluntly, is a man’s world. In a 2011 survey (the latest comprehensive stocktake), the Wikimedia Foundation found that less than 10% of Wikipedia’s contributors identify as women. This lack of inclusive participation has contributed to an alarming content gap: recent research indicates that only around 17% of biographies on Wikipedia are about women. These surveys don’t give numbers of articles about trans women, Māori women and other women of colour, or non-binary people, but we can fairly assume these groups are even more underrepresented. When women do get biographies, they tend to be more focussed on the subject’s domestic life, relationships, and family, than men’s (which, unsurprisingly, tend to focus more on career achievements).

All in all, it’s pretty shocking. Given the size and reach of Wikipedia, this uneven representation of women and non-binary people is a big problem. If we’re looking to Wikipedia to teach us about the world, what are we learning—and more importantly, what are we missing?

Fortunately, there’s a push to improve these grim statistics. Wikipedia and its parent organisation the Wikimedia Foundation acknowledged this gap, and work to address it has already started. In addition, independent organisations like Art+Feminism and Digital Science have been pushing hard to support women editors on Wikipedia with trainings and edit-a-thons. In New Zealand, there have been a number of events already to raise the profile of women in different fields, including a 2017 full-day workshop at the Royal Society Te Apārangi to add more women in science women in science. Together, these projects are starting to fill in some of the huge gaps in Wikipedia’s coverage of women and non-binary folks.

Edit for Equity, a series of Wikipedia “edit-a-thon” events running in Wellington this October, is the latest of these initiatives. Edit for Equity invites people of all gender identities to do their bit for equal representation by learning to edit Wikipedia and adding content about women and non-binary New Zealanders. Aimed at total beginners and experienced editors alike, the events are intended to make the process of editing less daunting and increase the visibility of the essential contributions of underrepresented New Zealanders. Each of the four edit-a-thons has a different theme (STEM, music film and tv, art and literature, politics and social change) to encourage a diversity of topics covered and build community around like-minded editors.

Even as we’re doing our best to even the scales with programs like these, the biases that plague the history books can bleed over into the present day. Wikipedia has strict requirements around referencing and “notability” (which topics are important enough to warrant an entry). This is great in many cases, as it helps to ensure Wikipedia is a source of verifiable information. At the same time, the contributions that women and non-binary people made to their fields throughout history were often left out of the history books or reduced to footnotes. When we come to write a Wikipedia bio about a woman who was ignored by the media of her day — or who lived in Aotearoa before colonisation and wasn’t recorded in later written records—it can be hard to meet Wikipedia’s requirements.

This isn’t just a problem for historic figures. This week, physicist Donna Strickland won a Nobel Physics Prize for her work on ultrashort lasers, only the third woman to receive this award in its long year history. However, until after her win, the only mention of her on Wikipedia was on her male co-inventor’s page. A draft that had been submitted in May this year had been declined due to insufficient references. While she had many professional accomplishments, not enough external sources had written about her to allow the article to meet notability requirements. This is a timely example of how, without meaning to, projects like Wikipedia can end up excluding the stories of women and other underrepresented people, and reinforcing the same old narratives.

In the long term, we’d love to see more conversations on Wikipedia and elsewhere about how to acknowledge and celebrate the contributions of women and other people who have been excluded or misrepresented in formal histories. In the short term, we’ll be editing for equity and working to improve gender diversity on Wikipedia bit by bit. It’s slow going, but it’s more fun if we do it together. Join us.

See the Edit for Equity website for more information and to register for events.